The symbol for the set of all correct dependency graphs of the sentence S with the set of dependencies R is GS. This can be considered as a single-layer dependency model. 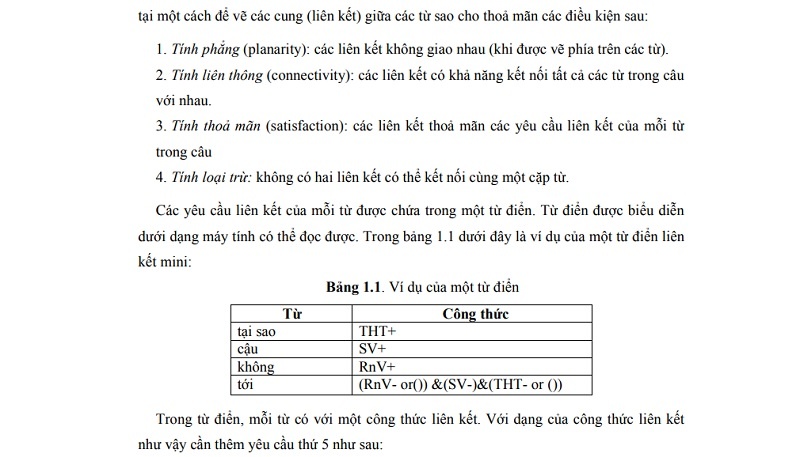 Dependency models according to the Prague school [109] allow for multi-layer dependencies, so it is possible to model semantic or morphological information while maintaining the properties of the dependency tree.

1.3.2 Properties of the dependent tree

In [57], [62] proved that the dependent grammar is weakly equivalent to the context-free grammar.

The basic difference between dependent grammars and context-free grammars is that the dependency structure represents the central-dependency relationship between words, classified by functional domains such as subject or complement. , while representing the context-free type of grouping words into phrases and classifying them by structural domains such as nouns and verbs.

However, for the same sentence, the dependency tree is much simpler than the structure tree because it contains only as many nodes as the number of words in the sentence +1.

Dependency grammar is well suited for languages ​​with free word order, because many dependency models do not require projective properties. The fact that the dependent grammar can represent the dependence on word morphology (gender, number, way…) is also a compelling reason for the above statement.

The dependency grammar can represent semantic information if extended models are used. According to Fox [55], the dependency model is very convenient for machine translation problems because of its small crossing measure.

The classical dependency model does not solve the coordination problem due to the one-word-central nature of the dependency relationships. To solve this problem, it is necessary to use some extended forms of dependent grammar such as Dependency Categorical Grammar [103], or dependency with many central words according to the word grammar model. (Word Grammar) by Hudson [65], [114].

1.4.1. The concept of linking grammar

The associative grammar model was introduced by Sleator and Temperley [111] in 1991. Up to now, this model has been developed and used in many different fields because it has described many phenomena of English as well as English. many other languages. English Link Analyzer allows analysis of many long sentences, compound sentences. Link analysis results are commonly used in systems that allow information extraction, machine translation, and language generation.

A linking grammar consists of a set of words (which can be thought of as the set of terminators of the grammar), each of which has a binding request. A sequence of words is a correct sentence if there exists a way to draw arcs (links) between words such that the following conditions are satisfied:

The association requirements of each word are contained in a dictionary. The dictionary is represented in a computer readable form. In Table 1.1 below is an example of a mini associative dictionary:

Table 1.1. Example of a dictionary

In the dictionary, each word has an associated formula. With the form of such a link formula, the 5th requirement should be added as follows:

5.Calculation: When the connections of a formula are traversed from left to right, the words it connects to progress from near to far.

The graph in Figure 1.6 shows the association requirements that are satisfied in the question “Why don’t you come?”.

Figure 1.6. The grammatically correct sentence “Why didn’t you come”

The use of formulas to represent a dictionary of associative grammars is close to the phenomena of natural language, but is cumbersome for describing the association analysis algorithm. In [111], another way of representing a linking grammar was introduced, called disjunct.

When analyzing sentences, the association analyzer will convert the formulas in the dictionary into the corresponding vacancies and find a combination of recruitment forms that satisfy the above requirements, if the sentence is syntactically correct.

A fat connector is a connection that connects not only words but also phrases. Therefore, it can be understood that the collection contains a large connection consisting of two lists left and right, each list containing a subset.

Figure 1.7. Great connection of the word “and”

Associative grammar is classified as dependent [70], because the model also represents relationships between words in a sentence. However, linking grammar has many differences.

Non-directive linking: The linking grammar has no concept of “rule”, “dependency”. The connections are not directional, the two words linked together are equal. This model is only interested in whether the direction of the link is left or right. This is the basic difference between dependency grammar and linking grammar.