react faster than interest rate movements, which increases the elasticity of money demand for interest rates, accelerates the circulation of capital flows, makes money supply and demand difficult to predict. more informed, the transmission mechanism of monetary policy is more sensitive. To perfect the information system to support the planning and implementation of monetary policy, the SBV needs to implement solutions such as promoting joint ventures, linkages and cooperation with domestic and foreign organizations in business, research and development. develop banking services to quickly access new technologies in line with international practices and standards. Enlist the financial and technical support of international organizations to modernize technology and expand banking services.

5.4.2 Solutions from the Government

- Amending and supplementing legal documents on the state budget and the State Bank in the direction of ensuring the independence of each policy.

- To encourage the use of non-inflationary shortfall financing through the issuance of bonds and bills as a basis for the development of the open market and the SBV's discounting and rediscounting tools.

5.4.2.2 Perfecting the basic conditions towards operating monetary policy according to the mechanism of inflation targeting

- Gradually build independence for the State Bank. Allowing the State Bank to be more proactive in regulating the money supply to suit the requirements of the economy, not to meet the needs of the State budget and the Government. In the implementation of monetary policy, the State Bank must be self-determined in using monetary policy tools to improve the efficiency of using such tools.

- Focus on studying the monetary policy transmission mechanism in Vietnam to clearly determine the time lag, mode and impact level of policies implemented by the State Bank on monetary policy objectives.

The improvement of monetary policy in Vietnam cannot be separated from the process of perfecting the banking system in general and the organizational and operating apparatus of the State Bank in particular. This is reflected in the fact that the Government must unify and synchronize the issued relevant laws and legal documents, thereby ensuring the effectiveness of the entire system of regulatory documents of the industry. The elaboration and promulgation of sub-law documents should be done quickly and in a timely manner.

5.5 Limitations of the topic and directions for further research

- The limitation of the study is that the access to data such as the number of observations is not much in space and time. Therefore, the next research direction is to expand the scope of research on the transmission from the interest rate policy of the State Bank to the commercial banking system in Vietnam. Consider different periods such as pre-crisis, post-crisis, the impact of the process of integration and monetary liberalization on interest rate pass-through.

- The cause of the short-term incomplete and asymmetrical pass-through has not been explored, ignoring the impact of macro-economic factors and considering the SBV's monetary policy to be transparent. As official interest rates and money market rates change, banks may not find it profitable to adjust their rates immediately. For example, retail interest rates will be less volatile in inelastic markets and the demand curve for retail products in banks may be less elastic in the short run than in the long run. In general, banks face fixed cost adjustments in order to adjust their rates in a timely manner (Hannan and Berger [1991]; Bondt [2002]). Therefore, in further studies, it is necessary to measure interest rate pass-through under varying cost conditions to see the level of pass-through more accurately. At the same time,

Chapter 5 summarizes the main results studied in Chapter 4, conducts monetary policy of the State Bank in the coming time and offers solutions on Agribank's interest rate policy in order to increase the level and speed of interest rate pass-through. At the same time, some limitations of the study and suggestions for future research directions are also given.

3. Gambacorta L and S Iannotti (2007): “Are there asymmetries in the response of bank interest rates to monetary shocks?”, Applied Economics.

10. Scholnick, B. (1996) “Asymmetric Adjustment of Commercial Bank Interest Rates: Evidence from Malaysia and Singapore”. Journal of International Money and Finance. 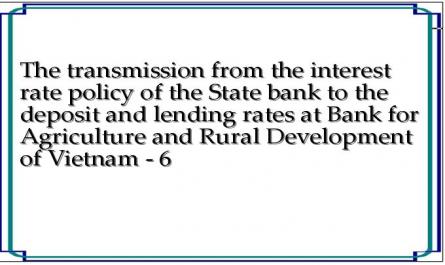