In the dependency grammar, dependency is present and the word central is required. It is assumed that from the existence of the dependent word A it can be concluded that the existence of the central word B. The association grammar allows the association to occur or not. That gives the ability to distinguish between mandatory and optional components in the language’s syntax. 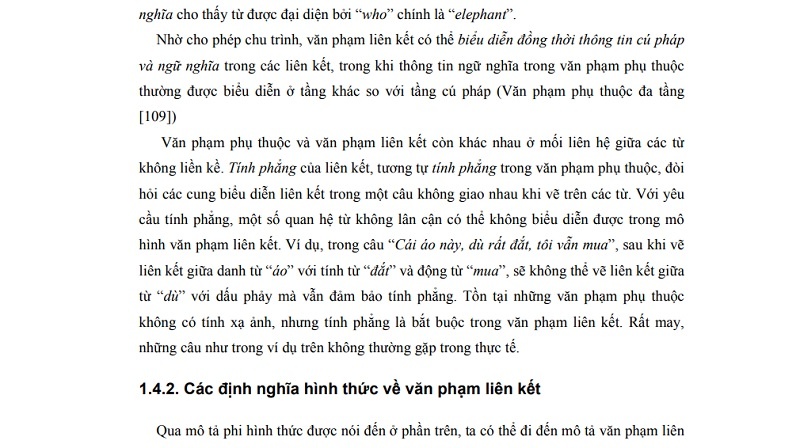 The concept from the center, the very important concept of the dependency model and many other grammar grammars such as HPSG [104] or X-bar theory, is still controversial. The association grammar does not use this concept and has been successful at the syntactic level. However, Schneider [109] argues that there may be some difficulties in semantic analysis without specifying the dependency orientation.

The rules of grammar contain information about word order, that is, about whether related words appear before or after the word described at a lexical entry, consistent with the lexicalization bias of most words. current grammar, suitable for languages ​​where word order is important. That’s also why the linking grammar is flat.

Unlike in a dependent grammar, a graph representing an analysis in a linking grammar can be cyclical, for example when analyzing sentences with relative pronouns as shown in Figure 1.8. down here:

Figure 1.8. The cycle in sentence analysis

In Figure 1.8, the bond causing the main cycle is Bp. This is a form of semantic association that shows that the word represented by “who” is “elephant”.

Dependent grammar and linking grammar also differ in the relationship between non-adjacent words. Associative flatness, similar to flatness in dependent grammars, requires that the arcs representing the association in a sentence do not intersect when plotted over words. With the requirement of flatness, some non-neighboring word relations may not be represented in the associative grammar model. For example, in the sentence “This shirt, even though it’s very expensive, I still buy it”, after drawing a link between the noun “shirt” and the adjective “expensive” and the verb “buy”, it will not be possible to draw the link between the word “even” with a comma while still ensuring flatness. There exist dependency grammars that are not projective, but flatness is required in associative grammars. Thankfully, sentences like the one in the example above are not common in practice.

As described above, a link net will represent the analysis of a certain phrase in terms of a link grammar. A link network can be visualized as a graph with vertices labeled as words and arcs labeled as connection types. The graph of the connected network is a flat, connected graph, with all the vertices ordered on the boundary of the graph.

The relation E is reflexive if and only if (x, x) E

Assuming is an alphabet and Pr is the set of primitive types, (ν, ) is a perfectly ordered set,

The set of all connected networks on is denoted by NPr(Σ).

The result of the affiliate network is a syntactically correct association phrase.

The link node is a formal concept of a selection form. 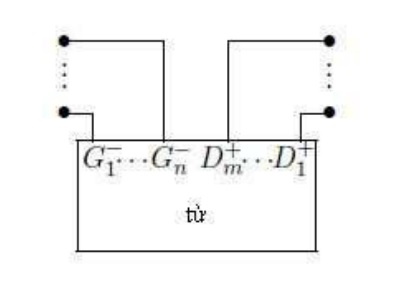 The sentence c1…cn ∈ Σ + is produced by associative grammar G if and only if there exists a linked network N such that c1, …, cn = yield (N) and N are produced by G.

The language produced by the associative grammar G, denoted LΣ+(G) is the set of all sentences produced by G.

Comparing the above-mentioned grammar models, it can be seen that the classical context-free grammar model still has some limitations with complex tree of structure, difficult to represent the relationship between non-adjacent components as well as many phenomena. peculiarities in each language. A grammar based on a context-free approach is a tree connection grammar that requires a very large tree bank, which is not currently available in Vietnam. The stroke approach is capable of representing a wide language class, but building a stroke system requires a lot of effort and extensive knowledge of Vietnamese.

As analyzed in Section 1.3, sentence analysis by dependency model has many advantages. That’s why dependency analyzers have been built for many languages. The first is a language with a free word order such as Russian [98], Turkish, Finnish [109]. However, that does not mean that the dependency model is only suitable for languages ​​with free word order. Dependency parsing has also been successful in English [44], French [39], [40] and many other European languages. Dependency parsing is also noted for many Asian languages: Japanese [99], [125], Korean [74], [78], Chinese [118], Indonesian [72], Thai[119 ], Philippines [85].

The dependent grammar model is difficult to build without basic research in linguistics. For example, according to [2], there is still a lot of controversy about the composition of nouns: In Vietnamese, there are cases where the main element of grammar plays a secondary role in terms of grammar while the main element in terms of words. grammar plays a secondary role in grammar.

Currently, there is only a Vietnamese dependency parser built by Nguyen Le Minh and colleagues [17]. This parser is built using the MST method, ie converting the problem of finding the dependent tree to the problem of finding the largest spanning tree in a graph, on a corpus of 450 labeled Vietnamese sentences and manual analysis. Thus, there is no real dependency grammar built for Vietnamese.

The thesis has decided to choose the linking grammar model for the following reasons: