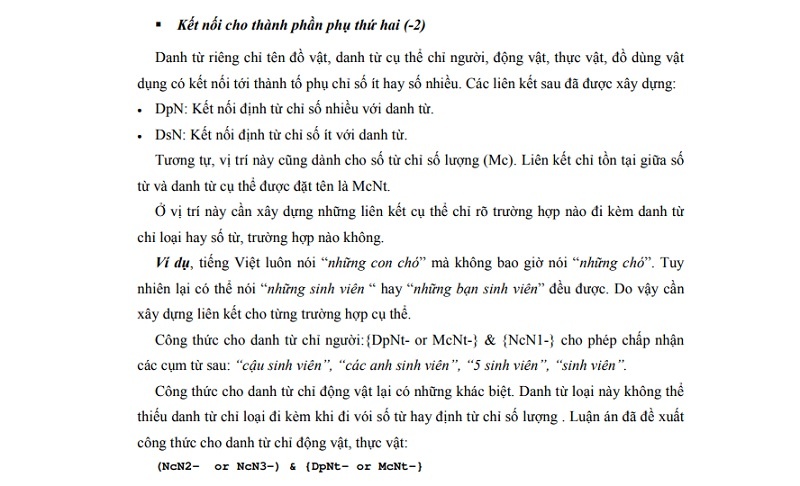 The thesis has built a dictionary based on the classification in [16] (subcategory level).

Details of typical links are presented in the appendix.

Nouns are words that appear with the greatest frequency in sentences. In [2], some characteristics related to the connection of words were stated when dividing nouns into subcategories:

In order to build a Vietnamese dictionary, [16] had a classification suitable for automatic processing, so the thesis followed the method of [16]. Accordingly, the noun subcategories are divided into smaller groups, each of which may have its own associations representing the phenomena mentioned in [2]. The thesis dictionary built according to this classification has additional exceptions: some entries are merged into one, while others are added. Details of the association of each word type are presented in the appendix.

The most important role of a noun is as a subject. Regarding predicates, in Vietnamese the most common types of predicates are verbs (especially the relative verb “is”) and adjectives. Thus, the connections SV+, SA+, and DT_LA+ are certainly present in all types of nouns, except for type nouns and some groups of unit nouns. Nouns are also direct and indirect objects of actions, so in general, nouns connect O- (direct complement) and IO- (indirect complement) with verbs, LA_DT- with verbs. “is” relationship For details on the association formulas see the appendix.

Considering the structure of nouns, it is possible to find relationships in which the noun plays a central role. Nguyen Chi Hoa [8] thinks that only one noun is the center of a noun, but Nguyen Tai Can [2] chooses the option of two central words. Anyway, that doesn’t affect the number of connections. In the most complete case, a noun can have the structure shown in Figure 2.1. below (according to [8]):

Figure 2.1. Noun structure with all the elements

a. Sub-element before the noun

– Nouns of type: Nouns of the type “child”, “that”, “book” … are divided into the type of association with 6 subcategories of specific nouns.

– Unit nouns: [16] divides unit nouns into 4 types of units of measure and two other categories: administrative organization and frequency.

The following is the connection form for the position before the noun:

Nouns of categories: Nouns of categories are composed of many sets, each of which goes with only a few nouns. For example, “co”, “car” only goes with things, “uncle”, “boy” only goes with nouns referring to people. To ensure the accuracy of the linkage analysis, the thesis proposes different types of connections for each type of noun that can be combined with a noun indicating the type.

Proper nouns indicating names of people have the connection NcN1- to nouns of types related to people such as: “aunt”, “uncle”, “child”…

For example, the phrases “Mrs. Clinton”, “Uncle Cuoi” contain the NcN1 association between the noun of the type and the proper name.

Proper nouns refer to the name of the work with the connection NcN4- to nouns indicating the type of thing.

Example: The phrase “bible” contains the NcN4 association between the word “book” and the word “Bible”.

Specific nouns: Depending on the type of noun, determine different types of association with nouns of the type, for example “guy”, “child” goes with nouns referring to people, while “tia” goes with nouns. phenomenon only. The division into 6 types of links ensures the correct representation of Vietnamese usage:

Some nouns that are not only type but are used as nouns of type also have the same connections as above, for example “she”, “duc”…

Unit nouns: Unit nouns usually come with a word count. In [16], unit nouns are divided into 6 subcategories, but only 4 subcategories: exact scientific measurement, folk measurement, time, currency, which always comes with the number of words on the left and noun word on the right, for example “2 kg of paddy”.

The linking formula for this type of unit noun is built as follows: