The above problem is solved by the Inside – Outside Algorithm proposed by Baker in 1979 for context-free grammar [81]. This is essentially a variant of the forward – backward algorithm of the hidden Markov model (Hidden Markov Model – HMM). The algorithm allows to calculate the inner and outer probabilities for the input sentence S recursively. 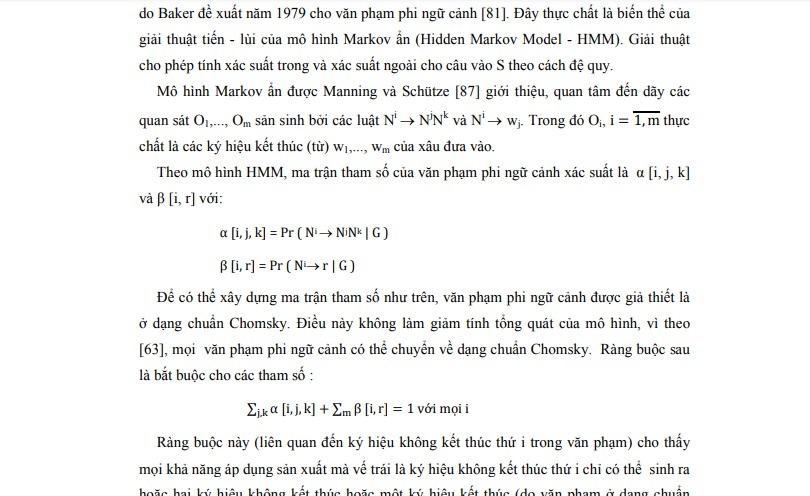 The hidden Markov model, introduced by Manning and Schütze [87], is concerned with the sequence of observations O1,…, Om produced by the laws Ni → NjN k and Ni → wj . Where Oi , i = 1, m are actually the terminating symbols (from) w1,…, wm of the input string.

According to the HMM model, the parameter matrix of the probability context-free grammar is α[i, j, k] and β[i, r] with:

Here is the notation convention according to [87]:

The probability in βj (p, q) is the probability that the jth non-terminating symbol (Nj ) produces the observation (sequence of words) wp,… .wq. Formally,

Outer probability αj (p, q) is the probability that starting from the initial symbol N1 produces the non-terminating symbol NBC ? and the words of the input string are outside wp,… , wq. Formally, we have:

The inner and outer probabilities are the basis for building algorithms related to two main problems in parsing probabilistic models, which are:

2. Training: After finding the best parser for the input sentence, the parser needs to continue with the training phase. The training problem can be described as follows: redefine the probability of the rule set in the grammar G given the training sequence of sentences s1, s2,…, sn. The problem of training for a probabilistic context-free grammar was presented in [87].

According to [70], a probabilistic context-free grammar has the following disadvantages:

The lexicalized probabilistic context-free grammar not only shows the structure of phrases but also shows the relationship between words. In a Lexicalized Probabilistic Context Free Grammar, each non-terminating symbol is written as A(x), x = (w, t) where A is the label of the structure. The number of non-terminating symbols will increase dramatically, at most until |ν| × |τ| times, |ν| is the number of words in the vocabulary and |τ| is the number of type words of the language

The law of a context-free grammar of lexicalization probability takes the form:

In which, h is the pair of words/labels of the type. H is the principal child of the rule, will inherit the word/label pair from the parent node’s type P. The component Ln(ln) … L1(l1) modifies the H on the left and the element R1(r1).. Rm(rm) modifies the H on the right (n or m can be zero). The left and right ranges are extended by the STOP notation. So Ln+1 = Rm+1 = STOP

To avoid the number of parameters being too large, in the model given by Collins [43], the probability of the intrinsic law is calculated based on the probability series law.

The probability of generating a modifier can depend on any function of the previous modifiers, the domain of the central word or the central word. Therefore, distance is added [43] to the assumption of independence of modifiers. 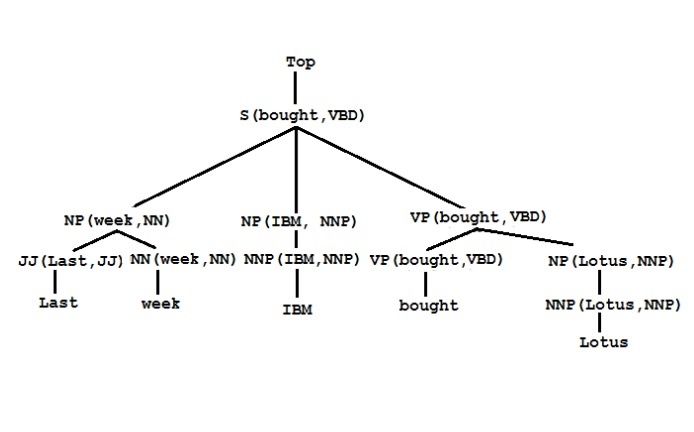 With the advent of treebanks, rewrite operations on the grammar can no longer take place on strings, but on the structure tree.

The base element of the Tree Adjoining Grammar (TAG) is the basic tree [69]. The underlying trees are joined together through two rewrites, combine and replace. The intermediate trees that are generated when substitutions and joins are applied are called parse trees.

A full parse tree is an parse tree in which every leaf node has a label as the termination symbol. The parsing for a sentence can be understood as: starting from a basic tree whose root is the axiom, find a complete parse tree whose leaf nodes correspond to the sequence of words in the sentence.

The TAG grammar is lexicalized to become LTAG (Lexicalized Tree Adjoining Grammar). This is also a completely lexicalized grammar. Every elementary tree has at least one leaf node associated with a lexical unit called an anchor word. In addition, the grammar also satisfies the following conditions: