Unified grammar is built on the basis of merging feature structures. The stroke structure is represented through an attribute value matrix (AVM) of the form:

For example, a noun structure in English describes the features of a noun: Type – noun, Number – Singular, Person – 3 as follows:

Rules in additive grammar are represented by a stroke structure containing variables, so that the rule can be applied to many different situations. For example, the rule of addition for a simple noun phrase:

represents the numerical unity of articles and nouns.

If the stroke can be represented as a line graph, then the stroke graphs can be merged into one large graph. It is the main component of unified grammar.

Unified grammar is a tool that can represent language class 0 which is the largest language class according to Chomsky’s hierarchy [63]. According to Tran Ngoc Tuan group [26], using unified grammar can solve some phenomena in Vietnamese such as the association of some words. Words can join together only when a conjugation that unites their strokes can be made. For example, the word “book” with the SHAPE: square/thin stroke is only associated with objects that have the same SHAPE stroke description, such as “book”. However, the detailed description for most of the phenomena of Vietnamese grammar to build a specific analyzer is too complicated. The authors of [26] only deal with a subset of Vietnamese nouns.

Dependent grammar has its origins in the ancient Indian language Panini, the modern model introduced by Lucien Tesnière [75]. The study of dependent grammar flourished in Slavic languages ​​[92], Turkish due to the free characterization of word order.

The auxiliary symbol set is the set of occurrence type names of the terminating symbols. Complementary symbols are not allowed to be ambiguous; Each symbol has fixed syntactic properties.

There are different models of dependency grammars. The first model was formally described by Hays [62] and Gaifman [57].

R: The set of rules depends on one of the following three forms:

R including the laws :

Usually, a ROOT word is added to easily handle objects like V. The sentence “John loves a woman” can be represented as a tree as shown in Figure 1.4 below: 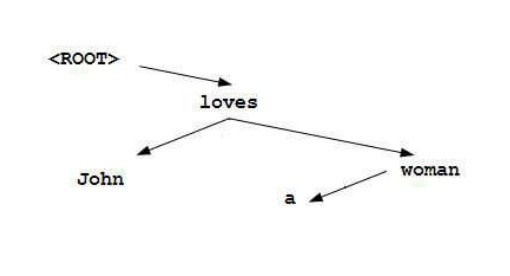 With regard to dependent grammars, there are several important concepts and properties that will be discussed below.

The following definitions are taken from [75]

For simplicity, assume that the sequence w1,…wn is a sequence of different words, for example in the sentence “Mary saw John and Fred saw Susan”, two different instances of the word “saw” are considered distinct. .

Suppose R = { r1, … , rm } is a finite set of possible dependencies between two words in a sentence. The relation type r R is called the label of the arc,

The dependency graph G = (V, A) is a directed graph including vertex set V and arc set A such that for the sentence S = w0w1…wn and label set R, the following statements are true:

Example: The dependency graph of the sentence “Economic news had little effect on financial market” in figure 1.5.

The definition of dependency (wi , r , wj ) is not unique but varies across different linguistic theory systems.