IN BUY AND SELL COMMUNICATION 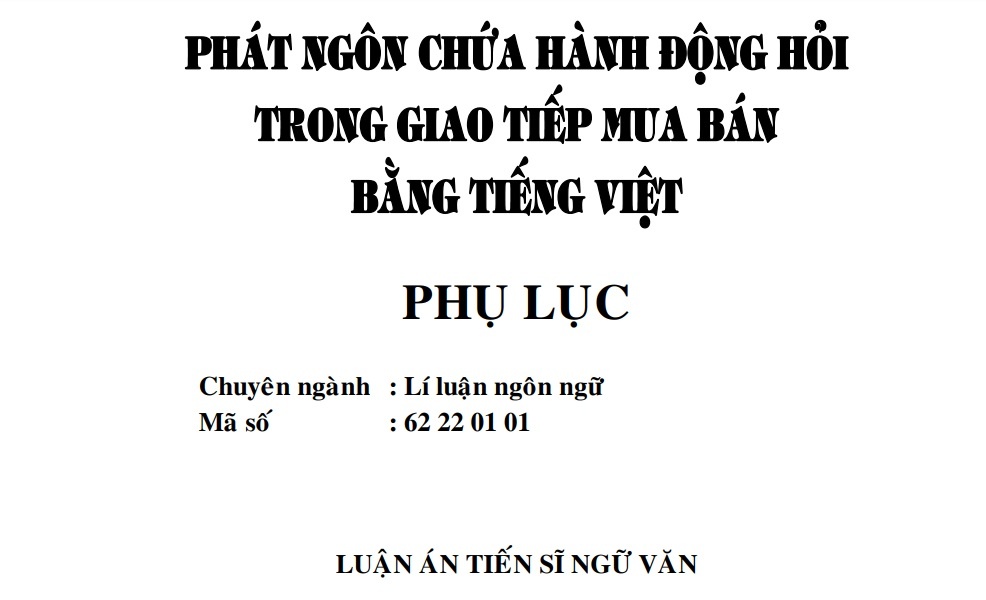 In the world, about the past thirty years, pragmatics has developed strongly and occupies a particularly important position. Research on the development and application of linguistic theory applied to language research and real life has achieved many achievements. The achievements of the applied linguistics major are the first factors that motivate us to study this topic.

On the other hand, the main difficulty posed by the trend of semantic research of languages ​​in the current period is the problem of identifying the communicative effectiveness of speech acts from the pragmatic level of the semiotic mechanism. . Going into the topic “Speech containing the act of asking in business communication in Vietnamese”, in a way, we want to share the above difficulty. Because in reality, ASK is a common form of language action, participating in the conversation structure with high frequency. Research on questioning action is a necessary work to identify language in practice, with its communicative effect at a high level in pragmatic theory in order to partially meet the above needs.

Previously, the study of the act of asking often stopped at formal signs, listing, categorizing, considering at a static level, detached from the context. The study of the act of asking in this topic is necessary not only at the formal signs but also to fill in the blanks in terms of content and to identify the effectiveness of communication at the language and language levels. non-verbal, through the semantic – pragmatic level of direct and indirect questioning.

Our country’s economy is still poor and backward compared to other countries in the region and the world, but trade communication is an important bridge, a vital activity, and promotes the economy of a country. , especially for Vietnam that has just joined the WTO – wishing to make friends with all countries, wishing to attract foreign investment, wishing to promote the economy through trade and development – then studying languages sales communication is an urgent practical requirement. This topic contributes to serving what the society is in need of.

Vietnamese language communication in general and sales communication in particular is an essential issue in contact and cultural-socio-economic exchanges between members of the ethnic community, among most professions. domestic production, among many countries around the world. Moreover, according to our incomplete statistics, in our country almost all companies, enterprises and production lines are forced to attach importance to the buying and selling stage – which is an important output to stimulate business growth. production demand. People in real life often play the role of buyers and the number of people doing business is also quite high. Therefore, teaching sales communication and career guidance for students, so as to achieve the highest efficiency in direct trading and indirect trading after graduation, is a necessity. the urgent reality of society for education.

On the other hand, the scope of social communication has standard problems: standards in production, trading, culture, language standards, etc. We emphasize the issue of standard language education for students. Language standardization is necessary, but so far, it still has many shortcomings,” said linguists, arguing. The standard still asserts itself” [176, p. 3]

So far, studying the choice structure of utterances containing direct and indirect questioning in pragmatics has not been mentioned by any works. This problem is both a legacy of its predecessors and a new and enhanced one. At the same time, the object of the thesis is the OS, so of course, the question statement is a major means of conveying the content of the OS, we cannot fail to mention it. The question statement has been carefully studied by Vietnamese linguists, many basic issues are also mentioned and solved at different levels such as: concepts; classification of question sentences; relationship between questions and answers in dialogue pairs. These are the following trends:

The above research directions, for a long time, have achieved achievements in terms of learning, semantics and some pragmatic issues. All the achievements of the previous scientists are an important premise to help us study another blank of the question and the act of asking in the pragmatic aspect. It is the study of the selected structure to create meaning, create effective communication with a new and open perspective of scientific vision.

The topic contributes to verifying and adding some awareness such as: the theoretical basis for the distinctive allegorical characteristics of the act of asking in sales communication. At the same time, the thesis clarifies the sociolinguistic nature, the nature of signals, the profound nature of linguistic activities and the multifaceted relationship between pragmatic theory, semiotics, cultology, and pragmatics. , psychology, sociology, sociolinguistics.

Research results can be applied in several fields: