Association with a noun (noun) exists when the noun (noun) is in the form of a direct or indirect complement. Whether the direct complement is a noun or a noun, a relationship is established for the noun. The noun is the direct object of the action associated with the verb through the O+ connection. Although the indirect object of an action is usually related to the verb through a preposition, there are some cases where the relationship between a noun and a verb is direct. For example, in the sentence “I gave my mother a flower”, “mother” is the direct object while “flower” is the indirect object. The link built between “donation” and “flower” is IO+. 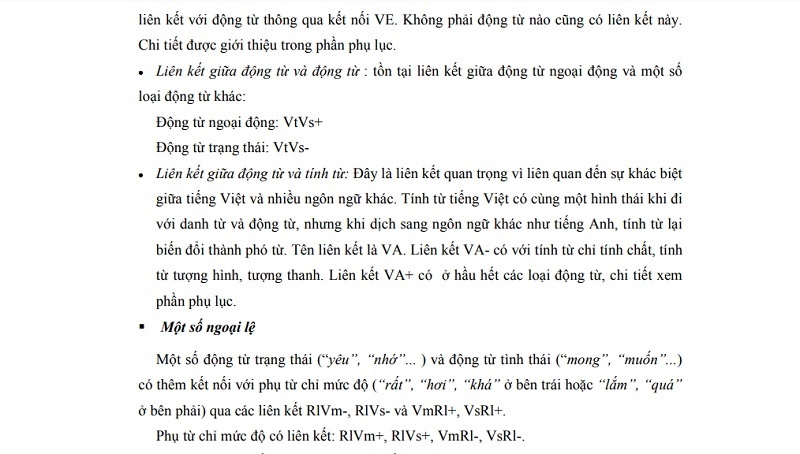 According to [2], the verb ending structure, that is, the part that follows the verb involves many types of prepositions, specifically in the following cases:

The formula is built only involving verbs related to this preposition such as “buy”, “sell”, “give”, “give”…

The word “of” adds the formula DT-CUA- & EoNt+. This formula ensures that the word “of” that comes after a verb always comes before a noun

– Sub-element indicates the person or thing participating in the action (“with”).

Links to verbs through VE connections. Not all verbs have this link. Details are provided in the appendix.

Example: The associations of the phrase “very scared” are shown in Figure 2.11 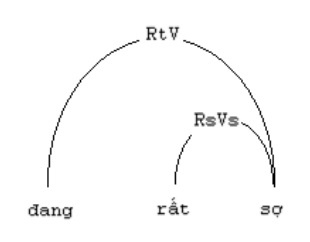 Linking verbs “go”, “done”: The verb “go” in Vietnamese often comes with other verbs such as: “go to school”, “go out”, “go shopping”… When translated into English will have special changes. Similarly, the verb “done” comes with another verb, when translated into English, it will change to the present perfect. Therefore, these verbs are placed in separate entries in the dictionary.

Similarly, the verb “done” is connected with transitive verbs such as “do”, “study”, “plow”…with the connection TEL_DONE+. Verb “done” with the link TEL_DONE

2.1.4.1 Links for adjectives as predicate

Similarly, only this type of adjective comes after the suffix of degree. However, there are some types of affixes that are not used before the adjective has used the affix of degree. The link formula will be built at the end of this section.

2.1.4.2. Link building based on adjective structure

According to [28], before the main element there can be affixes of time, degree, negative, affirmative, imperative. These affixes are built from the corresponding sub-categories. Thus, adjectives will have the following linking formulas:

In this position can be affixes required by the main element.

Range suffixes: Range affixes are only used with adjectives indicating properties. This affix can be a noun, verb or adjective.

If the affix is a noun, two cases can occur: