Thus, it can be said that the percentage of Cham illiterates is relatively uniform across ages, ranging from 86.7% to 93.8%. In particular, the age group 15 - 20 have a higher rate of re-blindness than other age groups, while the majority of this age group learn Cham language in primary schools. From that, it shows that if there is no organizational solution to strengthen the learning of Cham characters after learning Cham characters in primary schools, especially opening Cham script classes for the elderly, the situation of Cham illiteracy will be reversed. continue to take place.

2.2.2. The need to learn Cham script of the elderly Cham people

CHART 2.6: DEMAND FOR CARING BY LEVELS 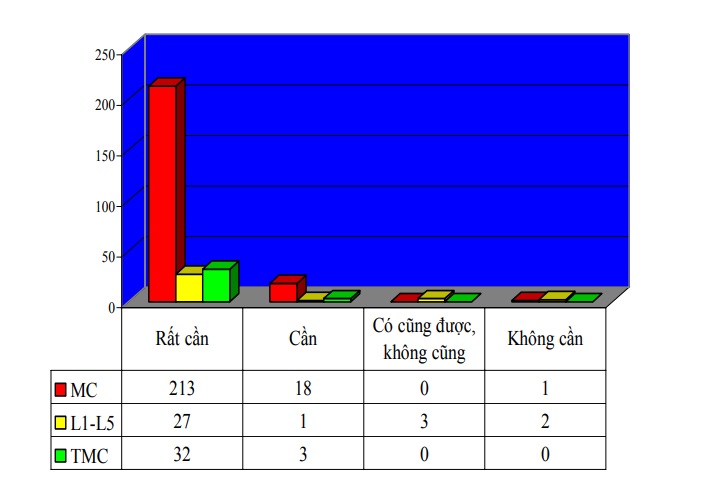 In the area of ​​Cham literacy (usually according to them, the maximum level is estimated to be grade 5, because so far no one in the survey has studied at the high school level in Cham), there are 27/33 people, accounting for 81 people. .8% said it was "very necessary" and 1/33 accounted for 3% said it was "necessary" to learn Cham characters. In this category, 3/33, accounting for 9.1%, have the opinion "yes, it's okay", but not necessarily learning Cham. Particularly, 2/33 people, accounting for 6.1%, think that "there is no need" to learn Cham characters.

Through the above analysis, it shows that whether they are illiterate or literate in Cham, more than 81% of Cham people in the survey have a desire to learn Cham and consider it a "very necessary" need in life. of the Cham community; a total of 272/300, accounting for 90.7% of the surveyed people, think that learning Cham script for adults is "very necessary" and 7.3% says it is "necessary". Thus, 98% of the Cham people in the survey really have a need to learn ancient Cham script; only 2% of people are not interested in learning Cham script in adults. 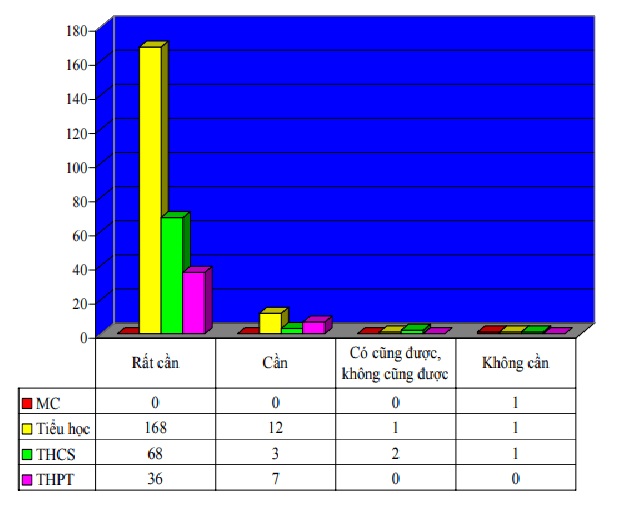 There is a common illiterate person, who also thinks that "there is no need" to learn Cham script.

2.2.3. The purpose of learning Cham characters of the elderly Cham

(Source: processing the questionnaire)
Notes:
* 1: Learn the customs and habits of the Cham people
* 2: Preserving the Cham language and writing
* 3: Other purposes

Graph 2.8: THE DEMAND FOR LEARNING ON PURPOSE 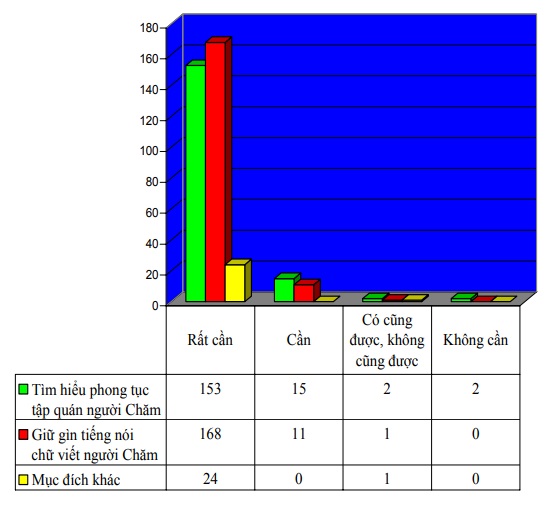 The survey results in Table 2.8 show that:

Only 2/172, accounting for 1.2%, have the purpose of learning the customs and habits of the Cham people, but "don't need" to learn Cham characters and 1.2% think that "it's okay or not".

Only 25 opinions, accounting for 8.3%, stated that the reason for learning Cham script is for other purposes, including some non-Cham people who think that they learn Cham script to ease their working relationships when communicating. with the Cham people.

Thus, it can be concluded that the main purpose of learning Cham script is to preserve the Cham language, especially the ancient Cham script, and thereby learn more about the Cham's customs and habits.

2.2.4. The demand for form, time, and number of learners in Cham classes of older Cham people

TABLE 2.9: DEMAND FOR TYPE, TIME AND NUMBER OF CAREER STUDENTS

The survey data in Table 2.9 shows that:

With 24 people who are state officials participating in the survey, 23/24 opinions, accounting for 95.8%, suggested that it is necessary to organize Cham literacy classes for adults at schools and said that it is necessary to have a teacher. learn Cham characters; There is no suggestion that they can learn Cham by themselves at home without a Cham teacher; however, 1/24 accounted for 4.1% of the people who did not express their opinion on this issue. Regarding the number of students in a class, 17/24, accounting for 70.8%, suggested that more than 10 people should be organized. In addition, there are 17/24, accounting for 70.8% of opinions, suggesting to organize Cham writing classes during the day; 3/24 comments, accounting for 12.5%, want to organize classes at night.

The above analysis shows that:

Although in different occupations, 253 out of 300 surveyed people, accounting for 84%, of which people who are civil servants, public employees or other professions account for more than 95.8%, think that it is necessary to organize literacy classes. Care at school; 88.7% of farmers agree with this view. Thus, the majority of Cham people in different occupations consider it necessary to organize a class with a teacher to teach Cham for adults as a general literacy class.

There were 265 opinions, accounting for 88.3%, of which people who are civil servants, public employees or other professions accounted for more than 95.8%, suggesting that there must be a Cham teacher; Only 10 people, accounting for 3.3%, confirmed that they can learn Cham characters at home without a teacher, the rest have no idea whether they need a teacher or not. That shows that people respect and put their trust in the teacher's teaching, the Education sector needs to pay special attention to the training of teachers to teach Cham both in terms of skills and moral training. teacher.