Ham Thuan Bac is a mountainous district with a relatively diverse topography, the last place of the Truong Son range flowing into the sea; has a hot and sunny climate with an average temperature of 26.70 C; average rainfall: 1,300mm, the highest is 1,500mm and the lowest is 800mm in the year, which is low compared to the national level. The rainy season starts from May to October and the dry season starts from November to April next year.

Total number of employees: 71,834 people, accounting for 48% of the population, the quality of labor resources is uneven. Mainly agricultural workers. The basic characteristics of the labor force are mainly unskilled, low-skilled, untrained workers, and high-skilled workers account for a low proportion. The number of scientific and technical staff is very small, in the whole district in 2000 there were 2,645 people who graduated from professional secondary schools, colleges or universities. On average, there are 18 people with a high school degree or higher for every 1,000 people.

Through two resistance wars against the French colonialists and the American imperialists, Ham Thuan Bac district was conferred the title of Hero of the people’s armed forces; The whole district has 310 Vietnamese Heroic Mothers, more than 3500 families of martyrs, war invalids, and thousands of people with meritorious services to the revolution.

Due to the consequences of the long fierce war, so far Ham Thuan Bac is still a poor district with slow economic development; nearly 80% of the population depends on agriculture; although agricultural production has developed quite well, people have low income, GDP per capita is less than 400 USD/year; about 15% are poor households, mainly focusing on ethnic minorities[33].

Despite many efforts in socio-economic development, the level of cultural enjoyment of the people in the district is not high, especially in remote, isolated and ethnic minority areas; The situation of law violation is of concern, because people are slow to absorb, lack of information and the propaganda and education of the law has not been highly effective.

In terms of education, the network and size of schools and classes have developed quite stably; all communes and towns have schools from kindergarten to lower secondary school; The district has 2 high schools. The work of illiteracy eradication and continuing education universalization has been consolidated and maintained to meet the learning needs of the people in the district.

The care and development of education in ethnic minority areas and areas with special difficulties have been given due attention; Cham subjects are still being taught stably in primary schools with a large number of Cham children. Party committees and governments at all levels pay attention to the development of education, considering the socialization of education as an effective measure to well implement the universalization of education. By December 2006, Ham Thuan Bac district had achieved the standard of universal primary education at the right age. As of June 2007, the district has 16/17 communes reaching the standard of universal lower secondary education; 14/17 communes have established community learning centers; organizations of the Study Promotion Association at all levels from commune to district have been established and put into operation quite effectively; The number of teachers at all levels is relatively adequate, most of which have been standardized in terms of professional qualifications, showing well their sense of responsibility in teaching and educating students. Most of the teaching staff are local people in the district.

Although the socio-economic conditions in the district are not really developed, the awareness of people in the district about caring for and developing the educational career is very respectable, most parents want their children to be children. my children go to school. In recent years, every year, more than 99% of 6-year-old children enter grade 1; Students’ parents contribute more than 1 billion VND to building and repairing school facilities annually. However, there are many disparities in learning quality between students in lowland areas and towns and students in areas with special difficulties. Due to the dispersed population, children in extremely difficult areas still have to travel long distances to get to a high school to study.

Cham people, also known as Cham people, Champa people, Chiem people. In the whole territory of Vietnam, the Cham ethnic group currently has more than 120,000 people, residing relatively concentrated in the provinces of Phu Yen, Ninh Thuan, Binh Thuan, Dong Nai, Song Be, An Giang, Tay Ninh, and Ho Chi Minh City. . Abroad, the Cham people live most in Cambodia (over 500,000 people), some live in Thailand, Malaysia and some other countries[8].

Cham people follow the matrilineal system, the bride’s family gets married for their children. The son stays in the wife’s house, until the wife’s family dies, they are responsible for worshiping until the end of the funeral, then bring the remains back to the family of the groom’s family to continue worshiping. Only daughters can inherit property, the youngest daughter can inherit the house to worship her grandparents and have to take care of her elderly parents.

Cham people follow 2 main religions: Brahmanism and Islam. The Cham people who follow the Brahminism are called the Cham Brahmins, this division has 2 groups: the group that performs the cremation ceremony when they die is called Cham Chuh (Church); The other group is called Cham Tar (Cham bury). Cham people follow Islam, there are 2 groups, called Cham Ba ni (in Binh Thuan and Ninh Thuan) and Cham Isalam (in Ho Chi Minh City, An Giang, Tay Ninh, Cambodia).

Cham people in Ham Thuan Bac district, mostly live in the delta, in 3 communes: Ma Lam, Ham Phu, and Ham Tri. The population of Cham people of the whole district is 4486 people (As of January 1, 2006, According to Official Letter No. 1008/KH-UBND dated September 8, 2006 of the Chairman of the People’s Committee of Ham Thuan Bac district)[33]. The majority of Cham people live by farming, low income, there are 252 poor households out of 1062 Cham households, accounting for 23.7%.

The intellectual level of the Cham people is still low compared to the common level of the whole district. Although the majority of Cham people have been cleared of Vietnamese illiteracy, there are only 31 Cham people in the district who graduated from professional secondary schools, colleges and universities (accounting for 6.9% of the total Cham population). The Cham people in Ham Thuan Bac district follow two religions: Brahmin (Ma Lam commune, Ham Phu commune) and Islam (Ham Tri commune). The dignitaries of the Brahmin religion often used the ancient Cham language (akhar thrah) in religious studies and ceremonies.

2.2. The reality of Cham literacy and the need to learn Cham letters of the elderly Cham

2.2.1. The reality of Cham literacy of elderly Cham people 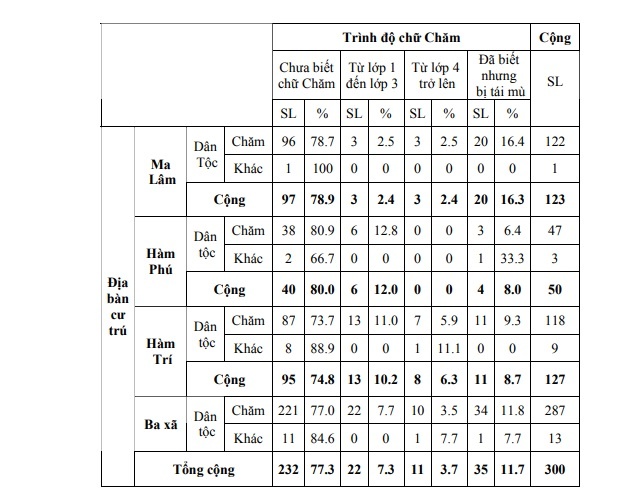 Graph 2.1: QUALITY OF CARING ONLY BY Ethnicity 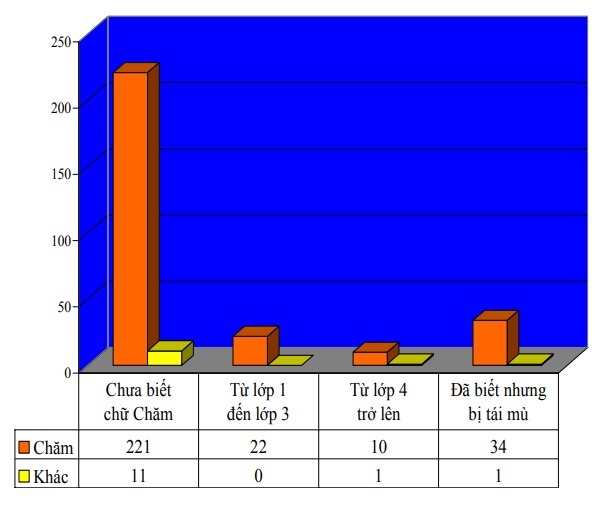 Of the 300 surveyed people, 287 are Cham people, 13 are other ethnic groups ( Kinh, Rai), they are married with Cham people or are teachers working in the 3 communes. investigate.

TABLE 2.2: QUALITY OF CARING ONLY BY GENDER 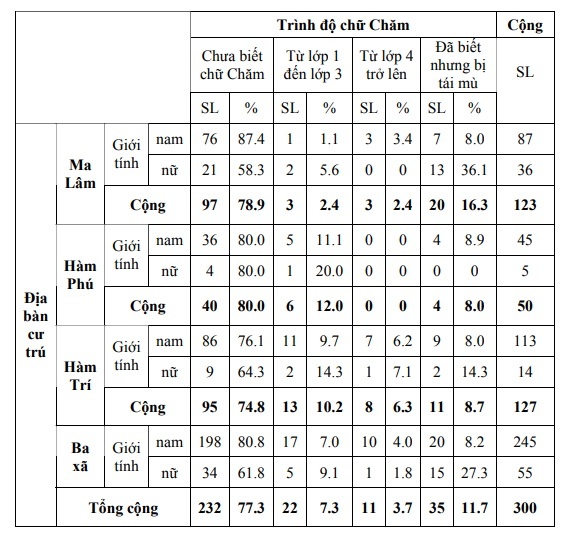 Graph 2.2: LEVEL OF CARING ONLY BY GENDER 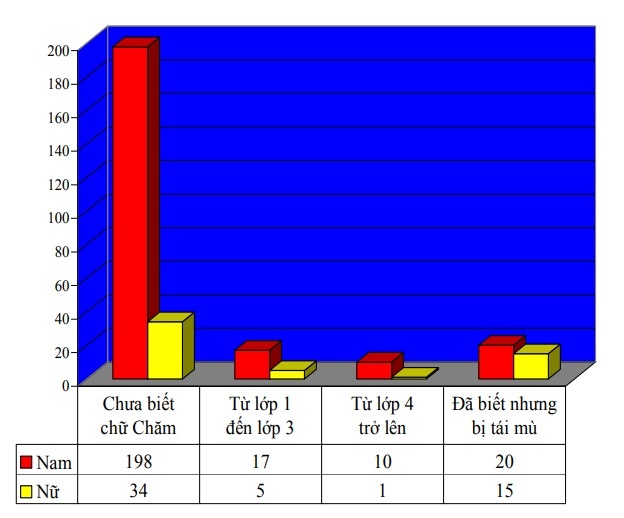 Table 2.2 shows that in the survey, 80.8% of the men were illiterate in Cham and 8.2% of the people were re-illiterated in the Cham. The number of men in both categories is 218/245 people, accounting for 89%. Psychologically, because women often have a lower cultural level and are afraid to contact, most of them refuse to investigate the level of Cham script.

In all three communes, there are only 55 women out of 300 respondents, the majority of these women, who have a higher educational level than the number of other women in the area. Through the survey, women have 61.8% of people who are illiterate in Cham and 27.3% of people who are re-illiterate in Cham. The number of women in both categories is 49/55 people, accounting for 89.1%; In fact, the number of Cham illiterates among women is higher than the survey data.

Like Kinh women in the past, they still suffer more disadvantages both in terms of family and in society. Cham men are still more knowledgeable about Cham characters, they are still naturally recognized by the Cham community as having the right to be given priority in terms of learning, especially learning Cham characters to conduct religious ceremonies. study the history or customs of the Cham people. 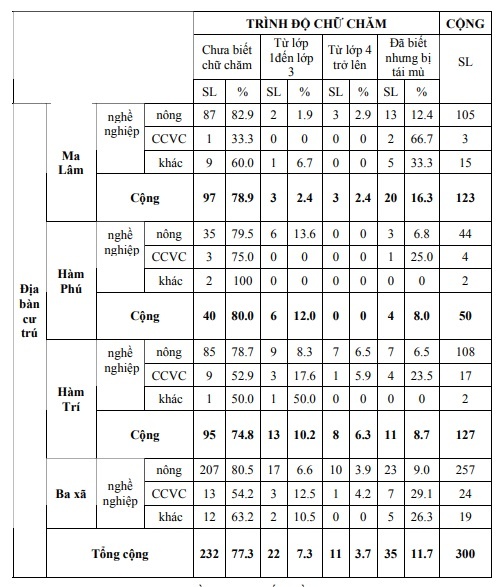 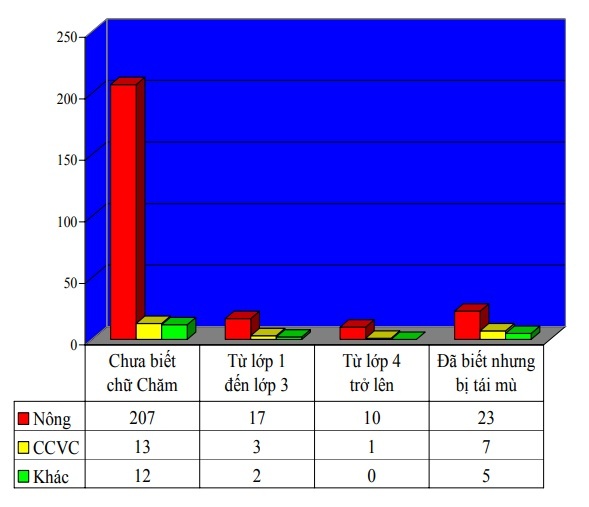 The survey data in Table 2.3 shows that: 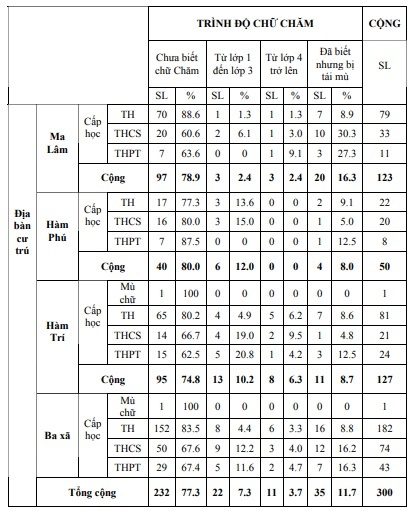 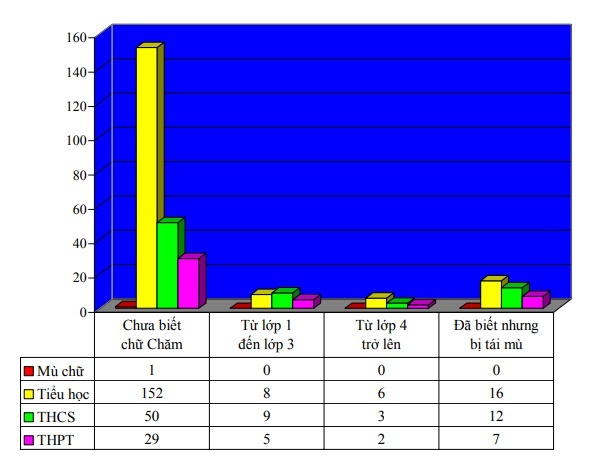 Through the above analysis, it can be concluded that the higher the level of general education, the lower the Cham illiteracy rate. That shows the need to promote the universalization of general literacy education, to create conditions in terms of qualifications and awareness, thereby raising the awareness of learning Cham characters in the Cham community, contributing to implementation of bilingualism in education work in ethnic minority areas. 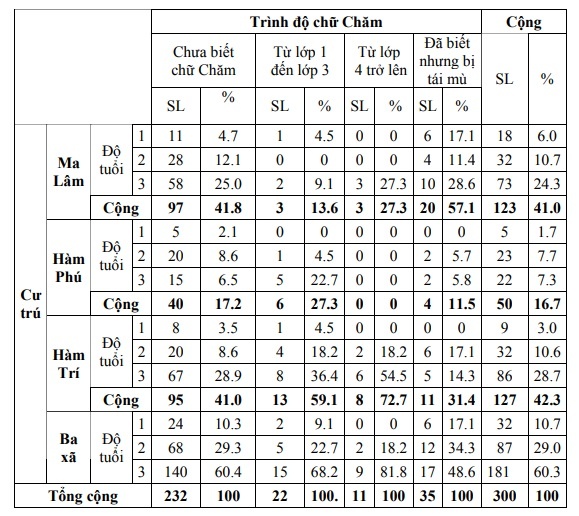 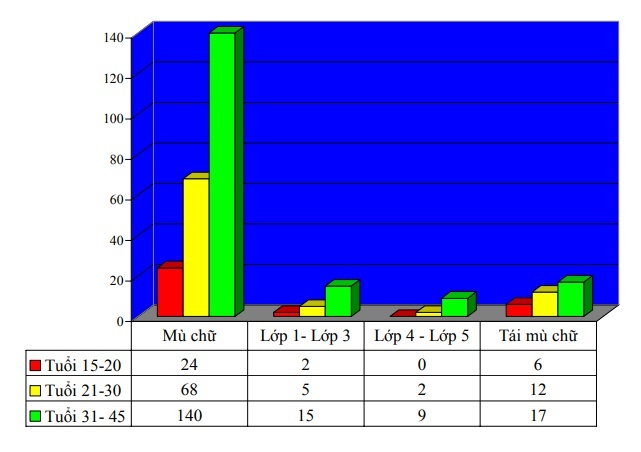 Of the 300 people surveyed: