SUMMARY OF THE MASTER'S THESIS OF ECONOMY 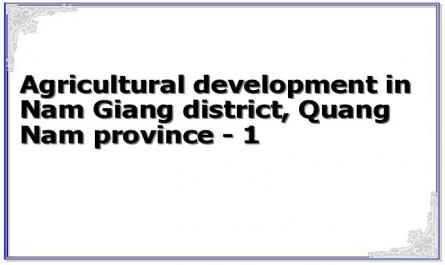 Thesis was defended in front of the Judging Committee of the Master's Degree in Economics at the University of Danang on January 10, 2015.

In that context, Nam Giang is a mountainous district of Quang Nam province, with more than 80% of the population being ethnic minorities, the economy is mainly based on agriculture, moreover, infrastructure and socio-economic conditions The district's association is still facing many difficulties, but the district's agriculture in recent years has also obtained positive results, gradually stabilizing a part of local food and creating a number of agricultural products.

- Analyze the current situation of agricultural development in Nam Giang district over the past time.

- Proposing solutions to develop agriculture in Nam Giang district in the coming time.

The object of the thesis is the theory and practice of agricultural development in Nam Giang district, Quang Nam province.

- About the content: A number of issues on agricultural development, agriculture is understood in a narrow sense including cultivation and animal husbandry.

- About time: Propose meaningful solutions in the next 5 years.

- About space: In the area of ​​Nam Giang district, Quang Nam province

The general methods used in this study are:

In addition to the Introduction, Conclusion, Table of Contents, List of References, the thesis is divided into 3 chapters as follows:

Firstly, agricultural production is regional in nature. Second, land is the main means of production.

1.1.3. The meaning of agricultural development

a. Agricultural development has great significance, which is to contribute to the market and factors

1.2. CONTENTS AND Criteria for ASSESSMENT OF AGRICULTURE DEVELOPMENT

+ Number of production facilities over the years (total and each type).

A rational structure of agricultural production is a structure between the branches of agriculture, whose components have the effect of promoting the potential of production and meeting the requirements of the market and society.

+ Proportion of production of industries and parts in the agricultural economy.

+ Proportion of added value of industries and parts in the agricultural economy.

The ratio of agricultural production value in the economy.

+ Ratio of production value of livestock in agriculture.

+ Rate of production value of crops and sub-sectors in agriculture.

+ Structure of labor distributed to industries.

+ Structure of land allocated to sectors

The resources in agriculture include labor, land, capital, science and technology, material and technical foundations... The scale in terms of quantity and quality of resources mobilized is decisive to the speed of development. agricultural growth and development.

a. Labor in agriculture

Human resource in agriculture is the total amount of labor involved in agricultural production activities, including quantity and quality of workers.

The size of the population structure.

+ Size and structure of labor resources.

+ Education level according to high school level and vocational training.

+ Level of income and expenditure calculated per household and person.

b. Land used in agriculture

Land is the main means of production that is not worn out and eliminated from the production process. If used properly, the land will have better and better quality, giving more products per unit of cultivated area.

+ Area and structure of agricultural land use.

+ Production value and income calculated per unit of land.

Thanks to the knowledge of agronomy and animal husbandry, advanced technologies such as irrigation, mechanization, chemistry, and biochemistry are widely applied in the production and processing process... Agriculture is developing and serving people better.

g. Criteria to evaluate the increase in resource factors

+ Land area and land use situation.

+ Labor and quality of labor over the years.

+ Number and value of facilities in agriculture over the years

Economic linkage in agriculture is the cooperation of partners along the value chain to bring agricultural products from production to consumption in order to find profitable opportunities.

- Criteria for evaluating economic links include:

+ Linking to ensure respect for the independence of agricultural production households with respect to ownership of means of production and production products.

+ The association must increase the competitiveness of agricultural products such as cost, design, and food safety.

+ Links must be sustainable and ensure appropriate distribution of benefits among partners, especially for farmers.

+ Link to ensure agricultural products meet the needs of the market .

1.2.5. Agriculture has a high level of intensive farming

Intensive farming has reached a high level thanks to the application of advances in science and technology to agricultural production such as mechanization, irrigation, biotechnology...

- Criteria for assessing the level of intensive farming

+ Productivity of crops and livestock.

+ Quantity of pure organic and chemical fertilizers per unit area.

+ Good seed structure in the cultivation and husbandry industry.

+ Proportion of areas being irrigated actively and scientifically.

+ Value of products and goods produced per unit area and per worker.

Agricultural production results are what agriculture achieves after a certain production cycle, which is expressed in terms of product quantity, product value, and production value of agriculture.

+ Number of products of all kinds to be produced.

+ Quantity of goods and products produced.

The value of goods produced.

The resulting increase in production is the quantity and value of products, as well as commodity products and the value of agricultural commodities produced over the years.

+ Quantity of output value each year.

+ Growth rate and growth rate of output over the years.

+ Commodity products and product value over the years.

+ Contribution to the State budget.

+ Income of employees over the years.

Nam Giang district is a mountainous district of Quang Nam province. It is nearly 70 km from Da Nang city to the southwest, 120 km from Tam Ky province to the northwest, 70 km from Dac Oc - Dac Tac border gate to the east.

In general, the terrain in the district is mountainous and rugged, the degree of division is strong, it is difficult to arrange production, invest in infrastructure development, arrange concentrated residential areas and apply scientific and technical advances into production.

In summary, the climate of Nam Giang district has the common characteristics of a tropical monsoon climate with high humidity and high temperature, creating favorable conditions for the growth and development of many plants and animals.

b. About social culture

b. The economic structure

In general, the economic structure of Nam Giang district has initially changed in a positive direction, gradually increasing the proportion of the industrial sector.

– Construction and trade and service sectors, reducing the proportion of agriculture sector. However, this shift is still slow, in the economic structure, agriculture still accounts for a large proportion.

In recent years, the district's socio-economic infrastructure has been interested in investing, expanding and upgrading, but it is still limited and has not met the development needs of the district.

As for the input market in agriculture, it is mainly done in the center of the district capital, Thanh My town and the center of communes.

As for the output market, some specialty products such as eucalyptus, bo bon, ta lap... are favored by the market, but due to the seasonal harvest, the output is dispersed, so they cannot be proactive in the market and prices. often precarious.

Farm economy in Nam Giang district in recent years has developed rapidly, especially forestry farms. However, the number of farm economic models has increased rapidly but has not yet developed commensurate with the potential of the district. The application of scientific and technological advances in farms has changed, but there are still many limitations.

Due to the unsynchronized infrastructure conditions plus many adverse factors such as low labor quality, low education level, and underdeveloped agricultural services, there is not enough basis to attract agricultural enterprises. investment in the district.

Table 2.4: Situation of agricultural production establishments in Nam Giang district over the years

b. Restructuring the farming industry

2.2.3. Scale of resources in agriculture

In general, Nam Giang district has great potential for land, but in recent years, land use has not really brought high efficiency. There is still a lot of unused flat land that can be reclaimed and used for rice cultivation. Unused mountainous land can be converted into perennial crops, annual crops and forestry land.

Funding for agricultural development is limited, mainly from support programs from the district and provincial budgets.

d.The application of science and technology to agricultural production

The application of advanced technology and equipment in production fields is still difficult, and the results of the application are still limited .