Along with the increase in loan sales, the outstanding loans also increased from time to time. In 2010, short-term loan balance to SMEs reached 700.35 billion VND, an increase of 30.5% compared to 2009. However, in 2011, domestic inflation and the bad influence of external debt crisis caused a surplus. Short-term loan debt for SMEs is 815.95 billion VND and increased only 16.51% compared to 2010.

Through the data table, we can see that the rate of overdue debt in short-term loans to SMEs in the period 2009 – 2011 of the Branch was always less than 1% and decreased gradually over the years. The rate of overdue debt in 2009 was 0.89%, in 2010 it was 0.83%, in 2011 it was 0.78%. Especially, in 2011 the economy was full of instability with high cost of credit and high credit interest rates, making customers’ situation difficult, but the decrease in bad debt ratio is an encouraging thing for customers. Branch in searching as well as checking the situation of capital use and debt collection of customers.

The table shows that: In general, loan sales to SMEs over the quarters of the years tend to increase and the quarter with the highest proportion is the fourth quarter followed by the first quarter. are mainly commercial and service enterprises, so their borrowing needs largely depend on the needs of consumers. On the occasion before and after Tet, consumer demand increases, so SMEs often borrow money at this time to do business. However, there is a special point that in the first quarter of 2009 due to the impact of the global economic crisis in 2008, it still did not reflect the demand for loans of SMEs in the locality.

Through the above analysis, it is especially noticeable that short-term loans to SMEs in the fourth and first quarters accounted for a large proportion and increased over the years. It shows that the Branch has well grasped the situation of short-term capital needs in the area to promptly meet the needs of SMEs, in addition to closely coordinating with the State Bank to stabilize the market.

2.2.4. Analysis of short-term lending to SMEs by lending method 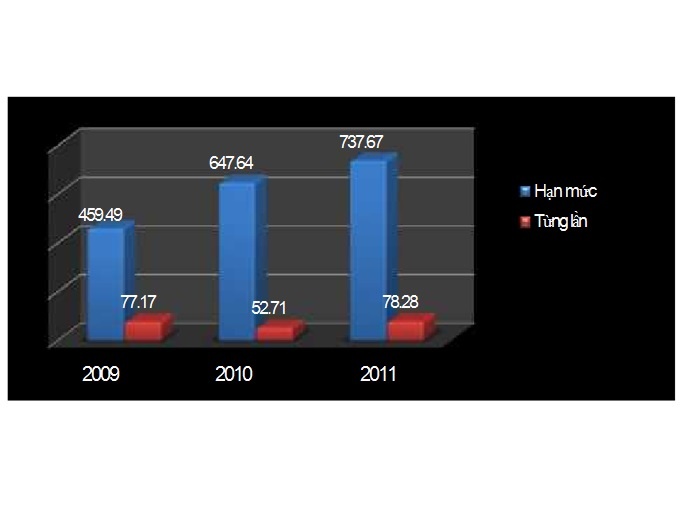 According to the above data, it can be seen that the short-term lending branch for SMEs is mainly lending according to the credit line. Loan balance by line was at VND459.49 billion in 2009, accounting for 85.62% of short-term loans to SMEs. In 2010, the loan balance under the limit continued to increase at 647.64 billion VND, accounting for 92.47%. Limit lending has the advantage of only needing to do one set of documents at the beginning of the planning period for the entire loan, but the disadvantage is that the Bank is susceptible to capital in business, low interest income. .. In 2011, the branch restricted lending by limit, so the outstanding loan balance was only 90.41% in the structure of short-term SME loans.

Loan turnover and limit debt collection also increased and decreased in the same trend as the outstanding loans under the limit in 2010 and 2011. At the branch, only lending by credit term was available to businesses. enterprises have regular relations, have great reputation with banks, stable production situation, and especially for enterprises dealing in few commodities. However, lending by line accounts for too high a proportion of short-term loans to SMEs, which is not good for the Branch, it can cause the Branch to stagnate capital when the enterprise registers but unused interest as well as low interest rates on loans may affect the profit from interest of the Branch.

In 2009 and 2010, the overdue debt according to the limit was always less than 30% of the overdue debt. But in 2011, the structure of overdue debt ratio by short-term credit line method for SMEs accounted for 35.03% of overdue debt and increased to 70%9 compared to 2010 at 2,242 billion dong. The above reason is also partly due to the loosening of short-term lending by the limit method in 2010 and 2011 and partly due to the volatile impact of the Vietnamese economy in 2011. A special point in 2011 then the rate of overdue debt by the method of installment loans decreased to 5.31% from 8.55% in 2010, this is an encouraging thing in the lending and debt collection by the installment loan method.

In general, in the past time, BIDV Quang Tri has flexibly implemented the above two lending methods. However, in the future, the branch may expand short-term lending methods, creating conditions for SMEs to expand their production and business scale, increase competition in the market to limit risks as well as create favorable conditions for SMEs. stable profit for the Branch.

2.2.5. Analysis of short-term lending to SMEs by collateral

Short-term unsecured loans to SMEs are mainly loans to enterprises with high creditworthiness and long-term relationships with the Branch. However, the number of businesses that have access to these loans is very limited.

From the table, we can see that secured loans account for a large proportion of short-term loans to SMEs. Specifically: in 2009, secured loan sales accounted for 94.24% of short-term loans to SMEs. In 2010 it was 92.46%, in 2011 it was 96.87%. Securing usable loans is one of the ways to increase debt recovery and reduce credit risk. The form of loan with collateral is the traditional form of lending activities of the Branch, however it tends to decrease in structure in 2010. In 2011, Vietnam’s economy was unstable. risk by increasing collateral in the loan structure.

Overdue loans of SME lending activities without collateral in the period 2009 – 2011 were all zero. This shows that the Branch’s short-term lending to unsecured SME loans for the loan is always in good condition. , three years without overdue debt. Since then, the branch should promote this form of lending, should not pay too much attention to the collateral, but should consider the plan, efficiency, as well as the production and business process of the enterprise and decide to lend. , both in accordance with the actual situation as well as in accordance with the regulations of the State Bank on lending without special assets.

In general, the situation of short-term lending to SMEs of BIDV Quang Tri in 2009-2011 according to collateral was relatively good. Most businesses do business effectively, most of them pay principal and interest on time.

However, overdue debt is still within the allowable level, the Branch needs to take many measures to strengthen lending and debt collection, limit risks, and improve credit efficiency.

At the same time, credit officers need to be more active in checking and appraising the business situation, the purpose of capital use, collateral, and pledge as well as urging customers to collect debts on time. , reduce bad debt to the lowest level… in order to contribute to the bank’s profit.

Lending activities are the main income generating activities for the Branch. With the Branch’s overall goal of maintaining a reasonable growth rate, focusing on dealing with bad debts, and cleaning up the Branch’s financial situation before implementing equitization in accordance with the direction of the Investment Bank. and Development Vietnam.

In 2010, total short-term loans to SMEs reached 700.35 billion VND, increasing by 30.5% 10 compared to 2009 ; in 2011 at VND 815.95 billion, an increase of 16.51% 11 compared to 2010. On the basis of traditional customer base, the Branch focused on expanding short-term loans to customers who are small and medium-sized enterprises. such as: loans to pay employees, buy cars and other forms of overdraft loans through accounts… As a result, the Branch’s short-term SME customer portfolio is diversified, the credit structure is adjusted according to positive way.

– Regarding the overdue debt ratio:

From the above table, we can see that the overdue debt ratio of the branch’s short-term lending activities throughout the period 2009 – 2011 was always less than 1%. The rate of overdue debt in 2009 was 0.888%, in 2010 was 0.832%, in 2011 was 0.784%. The rate of overdue debt is always at a small level and tends to decrease over the years despite the increase in loan sales and total outstanding loans. Credit quality has improved so strongly because BIDV Quang Tri has focused on strictly implementing the policy of strictly controlling credit growth in order to control inflation and maintain a reasonable growth rate, focusing on handling credit growth. debt management, actively collecting due debts, giving priority to loans to customers with good financial capacity to quickly recover debts, complying with the directions of the Bank for Investment and Development of Vietnam on credit work. It can be said that the period 2009-2010 is the period affected by the post-crisis crisis.In 2011, Vietnam’s economy was unstable, but BIDV Quang Tri still kept a very small rate of overdue debt. This shows the success of the Branch in collecting overdue debts. 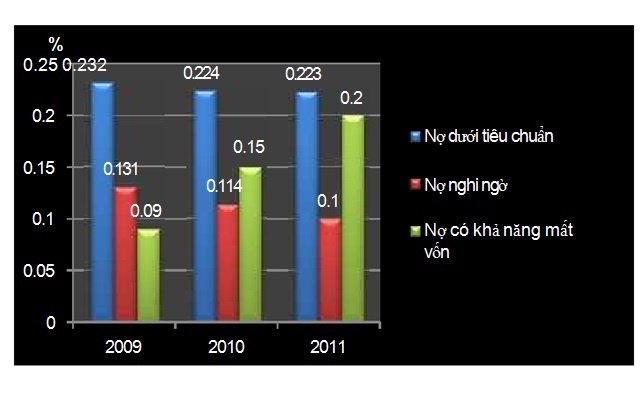 The bad debt ratio of short-term SME lending activities in the period 2009 – 2011 was always low and less than 0.6%, however, this ratio tends to increase over the years. This shows that the debt collection work is relatively good, showing the Branch’s efforts in debt collection. Going into the bad debt component, we see that the debt ratio of Group 3 is substandard debt and Group 4 is doubtful debt, which tends to decrease over the years. Group 5 debt, which is likely to lose capital, tends to increase and gradually accounts for a large proportion of the bad debt ratio. Specifically, in 2009 the debt ratio of group 5 was 0.09%, in 2010 it was 0.15%, in 2011 it was 0.2%. This is a bad thing. It will affect the capital source as well as the provision for bad debts, thereby affecting the profit of the Branch.

In general, the branch’s debt collection and handling is relatively good. However, it is necessary to take better measures for group 5 debt to further improve the financial position of the Branch.

This indicator reflects the profitability of credits. This is an important factor in assessing the bank’s loan quality. It tells us how much profit a dollar of debt brings. The higher this ratio, the greater the profit from lending activities. Through the data table, we see that in 2009, for every 100 VND of loan capital, it generated 2.79 VND of profit. This number increased to 2.92 in 2010 and 2.84 in 2011. This proves that profits from short-term lending activities for SMEs tend to be increasing. 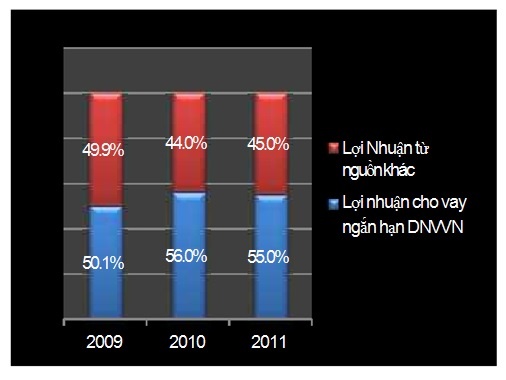 2.2.8. Analysis of the ratio of outstanding loans to total mobilized capital