In recent years, with the strong promotion of economic renovation, Vietnam has achieved great achievements with a high economic growth rate of over 8% per year. In the process of strong integration with the world economy, the domestic economy is making positive changes in line with the general development trend. Especially, since Vietnam became a member of the WTO, the imprint of integration has become clearer in our economy.

Vietnam Joint Stock Commercial Bank for Industry and Trade is a state-owned commercial bank, also one of the leading banks in terms of scale and quality operating in Vietnam. Branch of Ba Dinh Bank for Industry and Trade is a member unit of the Industrial and Commercial Bank system across the country, responsible for directly doing business on behalf of the Industrial and Commercial Bank in Ba Dinh District. In fact, the economic development potential of Ba Dinh District and the demand for consumer loans here is still very large. The development of the economy as well as the consumption needs of the people necessarily have the support of banks. Therefore, consumer lending is a potential market for commercial banks in general and Ba Dinh Branch of Industry and Trade Bank in particular in the coming time. 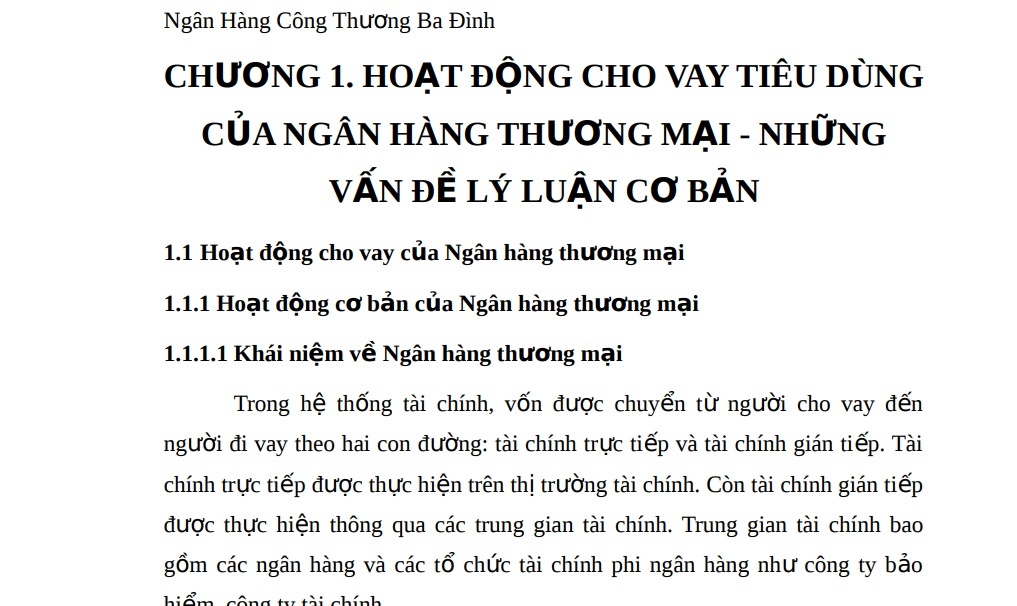 In addition to the Introduction and Conclusion, the thesis structure is divided into 3 chapters:

• Chapter 3: Solutions to improve the quality of consumer loans of Ba Dinh Branch of Industry and Trade Bank

1.1.1 Basic operations of a commercial bank

Article 20 Law on Credit Institutions (Law No. 02/1997/QH 10): A commercial bank is a type of bank that directly deals with companies, enterprises, economic organizations, mass organizations and other institutions. individuals by accepting deposits, lending money and providing banking services to the aforementioned subjects.

French Banking Act (1941): Commercial banks are enterprises or establishments whose regular occupation is to receive money from the public in the form of deposits, or otherwise, and to use resources. themselves in the discount, credit and financial transactions.

Thus, commercial banks are the most important intermediary financial institutions in the market economy. Thanks to this institutional system, idle capital sources will be mobilized, creating a large source of credit capital to be able to lend to economic development.

Bank for Agriculture and Rural Development (AGRIBANK), currently 100% owned by the State and will be equitized in 2008.

Vietnam Industrial and Commercial Bank – VietIncombank is currently 100% state owned and plans to be equitized in 2008.

Bank for Investment and Development of Vietnam (BIDV), currently 100% state owned, plans to be equitized in 2008.

– Vietcombank), in the current situation to increase capital and in line with the trend of financial integration with the world Bank for Foreign Trade of Vietnam has equitized to increase competitiveness with foreign bank branches. foreign and joint-stock banks today. After the share auction on December 27, 2007(1) Vietcombank officially became the first state-owned joint stock commercial bank in Vietnam.

A commercial bank established in the form of a joint stock company.

In which an individual or legal entity is only allowed to own a certain number of shares according to the regulations of the State bank of Vietnam.

A bank established by joint venture capital between a Vietnamese commercial bank on one side and a foreign commercial bank located in Vietnam on the other, operating under the laws of Vietnam.

• Foreign bank branch: is a bank established under foreign law, permitted to open a branch in Vietnam, operating under Vietnamese law

The role of commercial banks

Commercial banks are the most important intermediary financial institutions in the market economy. Commercial banks promote the operational efficiency of the financial system. Through commercial banks, people with small savings receive income from loan interest, and those who need to borrow small amounts of money can borrow money. This is not possible in the financial markets. Banks increase income for savers, thereby encouraging savings, and at the same time reducing borrowing costs for investors, thereby encouraging production and investment. Therefore, capital flows are circulated more easily and regularly, promoting socio-economic development.

Commercial banks are the largest depositors of savings in almost every economy. All entities in the economy, from individuals and households to businesses and social organizations, have deposits at the bank. Therefore, the sources of idle money scattered in the society are concentrated and used to meet the needs of business capital, investment capital for economic sectors and consumption capital needs of the society.

Commercial credit is an important source of finance for companies, individuals, households and the government. Credits provided by the Bank are used to purchase goods and services, invest, expand production and business, and build infrastructure.

Today, commercial banks are the largest cashiers and payment intermediaries in each country. Commercial banks act as a payment intermediary between customers. Many modern payment methods have contributed to reducing the amount of cash in circulation, reducing printing costs, preserving money, and saving costs on payment transactions. Therefore, commercial banks have made a great contribution in accelerating the speed of money-goods circulation, promoting the development of international trade and financial relations.

Capital mobilization is a meaningful premise activity for the bank itself as well as for the society. In this operation, commercial banks are allowed to use necessary tools and measures permitted by law to mobilize idle money in the society as a source of credit capital to lend to the economy.

Components of a commercial bank’s capital include:

– Have always been different

Building houses and offices, purchasing assets and equipment to create a material basis for the bank’s operations, the rest for investment, joint ventures, medium and long-term loans.

Bank’s reserve funds: these are the funds that are required to be set aside during the existence and operation of the bank. These funds are set aside at the prescribed rate on the bank’s net profit, including :

– Reserve fund: is deducted from annual net profit to supplement charter capital – Financial reserve fund: This fund is used to make provisions to cover risks and collect losses in the bank’s operations.

– Fund for technical and professional development – Fund for bonus and welfare.

The bank’s own capital is the most important financial factor, it just allows

This is the main source of capital of commercial banks, which is actually an asset in money of the owners that the bank temporarily manages and uses, but has the obligation to promptly and fully repay when requested by the customer. Mobilized capital is the biggest resource, including:

– Demand deposits of organizations and individuals

For deposits of individuals and institutions, in addition to interest rates, the need for quick and safe transactions is a fundamental factor to attract this source of money. For savings deposits, promissory notes, and bonds, the interest rate is the decisive factor and savers or buy promissory notes are for the purpose of making a profit.

Customers’ deposits are the most important resource, often accounting for more than 50% of the bank’s total capital. The first business of the bank when it comes into operation is to open a TG account to keep and pay for customers. It is thanks to this operation that the bank has mobilized the amount of money scattered in the society. Commercial banks receive deposits from organizations, individuals and other credit institutions.

The common feature of TG is that it must be paid at the request of the Customer, even if it is a TG with an undue maturity. The size and structure of deposits also depends on fluctuations in interest rates, inflation rates and income of customers. Therefore, this is a less stable source, requiring strict management of banks. In particular, the competition in the field of capital mobilization is increasingly fierce, banks must constantly diversify types of deposits, offer attractive interest rates to increase the quantity and improve the quality of loans. TG from KH.

Borrowed capital plays an important role in the total capital of commercial banks. This category includes:

– Borrowing from other commercial banks through the interbank market

Unlike receiving credit, commercial banks do not often borrow but only borrow when necessary. Borrowing is mainly to meet payment needs when mobilizing capacity is limited.

Commercial banks issue debentures such as bills, bonds, and certificates of deposit to mobilize capital from domestic and foreign organizations and individuals. With this operation, the bank has the ability to concentrate a large amount of capital in a short time. This is an important source of funding for customers’ medium and long-term borrowing needs. The ability to raise capital of this type depends heavily on the development level of the financial market and the reputation of each bank.