Conjugate ambiguity is ambiguity related to phrases that have an equivalent role in a sentence. As noted in [70], the word “and” plays a special role when analyzing a sentence on the associative grammar model because it can contain a regular connection as well as a large connection. 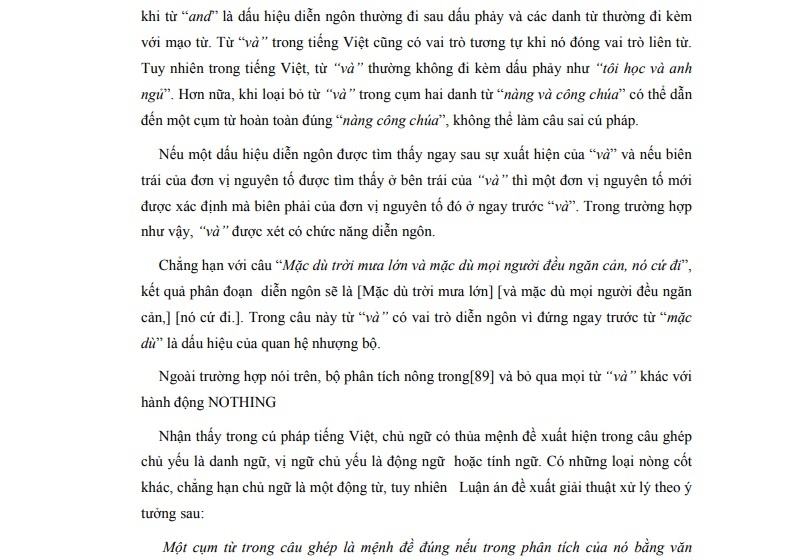 In [66], Le Thanh Huong also mentioned the problem of ambiguity when segmenting discourse, in which a word can act as a discursive sign as well as another, with the most obvious example being the word “” and” in English. The test of whether the word “and” is a sign of discourse is done by checking if the sentence is still syntactically correct when the word is removed. Example sentences with “Mary borrowed that book from our library, and she returned it this morning”. This observation can work convincingly in English, where the word “and” is a discursive sign often followed by a comma and nouns are often followed by articles. The word “and” in Vietnamese also has a similar role when it acts as a conjunction. However, in Vietnamese, the word “and” usually does not come with a comma like “I study and you sleep”. Moreover, when removing the word “and” in the two noun phrase “she and princess” can lead to a completely correct phrase “princess”, which cannot be syntactically incorrect.

For example, with the sentence “Even though it rained heavily and although everyone prevented it, it went ahead”, the result of the discourse segment would be [Even though it was raining heavily] [and although everyone prevented,] [it goes on.]. In this sentence the word “and” has a discursive role because it is preceded by the word “despite” as a sign of concessional relationship.

Apart from the above case, the analyzer is shallow in[89] and ignores any “and” other than the NOTHING action.

It is found that in Vietnamese syntax, the subject with the first clause appearing in the compound sentence is mainly a noun, the predicate is mainly a verb or an adjective. There are other core types, such as the subject being a verb, but the thesis proposes a processing algorithm according to the following idea:

The thesis solved the problem of ambiguity by parsing the phrase appearing before and after the word “and”. If both phrases are syntactically correct, the word “and” acts as a discourse. On the contrary, it acts as a conjugate. That is shown in the algorithm in Figure 3.11 and the results of analyzing the sentence “I like cake and candy, you like wine and beer” in Figure 3.24.

The percentage of correct analytical statements after de-ambiguity increases more or less depending on the frequency of occurrence of suggested words that can cause ambiguity. Incorrect results when removing ambiguities involving the words “and”, “or”, commas mainly because the clauses contain noun-adjective phrases. A noun-adjective phrase can be the core, but it can also be just a noun acting as a subject. For example, in the sentence “Sa Pa is the “kingdom” of fruits, peach blossoms, big yellow peaches, small yellow peaches, queen plums, purple plums, tam Hoa plums, gladiolus flowers, plum blossoms, pear blossoms, peach blossoms, chrysanthemums, roses … especially immortal flowers live forever with time”, commas cause ambiguity. Phrases such as “big gold digger”, “small yellow peach”, “purple plum” are separated into separate clauses when in reality they are just nouns that act as proofs of the assertion before the word “like”. “.

When applied on the link parser, the result is as shown in Figure 3.25.

Figure 3.25. An analysis with the F connection for the word “and”

However, this can lead to a connection: brother — sister. Although the linking grammar allows the cycle, this association does not represent the actual relationship in the sentence.

The most common case is a list with more than two elements, where the elements in the list “and” are separated by commas. For example “grandpa, grandma, dad and mom”. Then, the comma will have the form of selection (( G2 ) ( G1 , G2 )). Here, the subscript represents the priority of the connection.

Figure 3.26. Connect G joins multiple commas and the word “and”

The parsing problem is the crucial problem to be solved when building a new syntactic model. With the linking grammar model built for Vietnamese, the link parser of the thesis has solved the following problems:

The experimental results of the parsing algorithms are acceptable. However, due to the complexity of natural language as well as time constraints, the thesis has not solved the following issues: