4.2. Language difference between Vietnamese and English

There are many differences in word morphology between Vietnamese and English languages. However, not all differences can be handled in machine translation. With the associative grammar model, it is possible to construct a machine-readable rule set quite simply to overcome most of these differences. Before going into details, the thesis reviews the basic differences between the two languages Vietnamese – English. 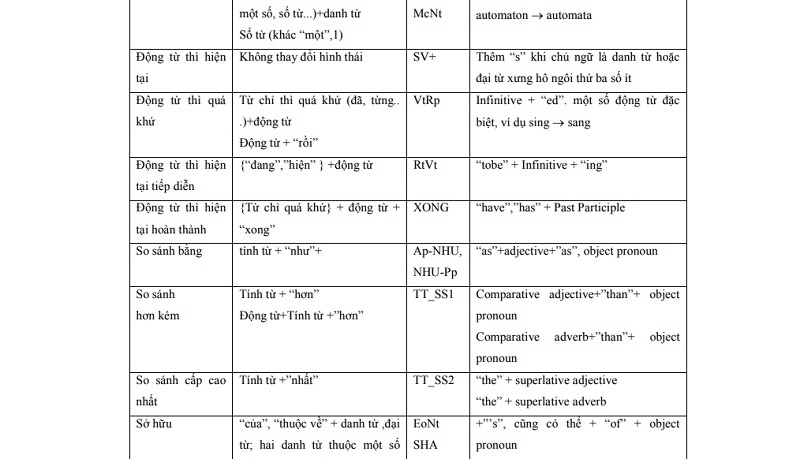 In addition to the above morphological differences, there are also differences in some special words. These differences require handling in the Vietnamese-English translation process

The use of pronouns in Vietnamese is very complicated. Translating into another language requires many rules to cover all cases. Table 4.2. Below is a list of English pronouns that are used in different cases

It can be seen that the number of pronouns in English is quite small, closely related to the grammatical structure. Vietnamese pronouns and phrases that function as pronouns are listed in Table 4.3.

Vietnamese and English mainly have the following differences in word order:

In English, adjectives always come before nouns while in Vietnamese, nouns come before adjectives (except for some exceptions like in the phrase “poor resources” with AN connection). Here is an image illustrating the rearrangement of word order:

The most commonly used question form in Vietnamese involves the word (phrase) to ask, for example “why”, “who”, “how”. These words are usually at the beginning or end of a sentence. In the English “wh” question form, the question word always comes first. Therefore, it is necessary to change the word order, as well as add the appropriate auxiliary verb ….

Non-neighborhood word order is a dependency established between words that are a certain distance apart. This type of dependency can be caused by a “gap” caused by a change in the position of a word, for example, “The wedding gift for the bride, I sent it”, or in compound and complex sentences. with statements such as “The shirt I bought yesterday is very beautiful”. When translating into English, to ensure the meaning of a sentence, it is often necessary to change the position of the word, but the position change for this type of sentence is difficult to represent simply by translation rules. Analyzing and translating this type of sentence requires statistical methods, machine learning with large datasets that we have not had the conditions to build.