The thesis has not been tested on complex sentences, which are sentences with two or more subject clusters but one cluster covers the remaining clusters, for example “the shirt you bought yesterday was very nice” with two subject clusters “you bought” “beautiful shirt”, the phrase “beautiful shirt” covers the rest. In fact, some cases can already be analyzed with our compound sentence analyzer, like the sentence “It says it doesn’t go anymore”. However, some cases need to use machine learning method to recognize gender. clause term.

According to Sleator [111], the time cost of the association analysis algorithm (when not pruned) is for a given grammar of O(n3) where n is the sentence length (the number of words in the sentence), the cost This is also equivalent to the time cost of parsing algorithms using context-free grammars. When parsing natural language, n is not large, so most of the time cost is due to finding matching rules in the grammar. If the grammar size is also considered, the association analysis algorithm has a cost of O(n3m), m is the average number of selected forms of the words in the sentence. Meanwhile, the complexity of CYK and Earley algorithms for context-free grammar according to Jurafsky [70] is O(n3 |G|), |G| is the production number of the context-free grammar. 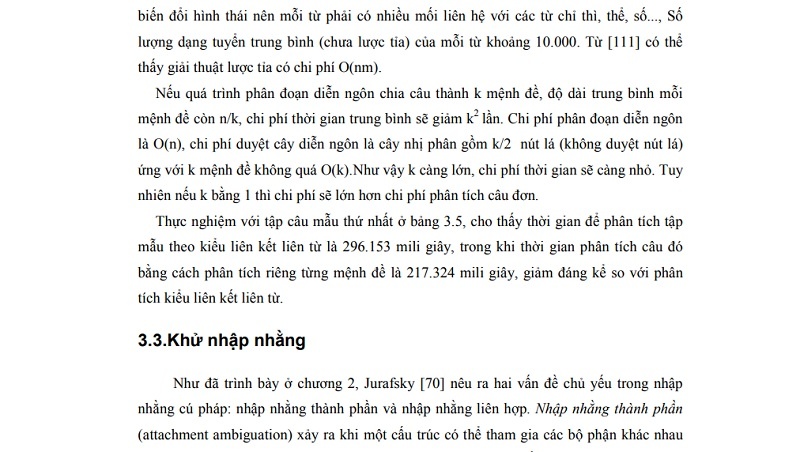 The main time cost is due to the combing stage. In Vietnamese, because words do not change morphology, each word must have many relationships with words indicating tense, form, number…, The average number of selected forms (not trimmed) of each word is about 10,000. From [111] it can be seen that the pruning algorithm has a cost of O(nm).

As discussed in chapter 2, Jurafsky [70] addresses two major problems in syntactic ambiguity: component ambiguity and conjugate ambiguity. Component ambiguity occurs when a structure can join different parts of the analysis tree, producing different analyses. Cordination ambiguation occurs when phrases are linked together by the conjugation “and”, “or”, “or”…Local ambiguity is also taken into account. when a word can receive labels from different categories. The local ambiguity of the partial association model was resolved during parsing. Unlike other models, the word is not labeled before parsing but is labeled based on the association it joins. A word with multiple meanings will appear in different formulas, but only combinations of words and labels that satisfy the association requirements will be accepted. Thus, the number of associative analyzes of each sentence is significantly smaller than the number of syntactic trees of the context-free model.

The composition ambiguity problem occurs when a sentence has more than one association analysis. The sentence considered here is a simple sentence. If it is a compound sentence, it will only solve the problem of ambiguity after splitting it into clauses.

O can take the values ​​→, ←, ↔ representing the direction of the link. It can be understood that: given the word L has a right connection of l and the word R has a left connection r, the parameter is the probability of the event: exists word W between L and R, the selected form d of W is linked. with L or R or both. Probability (3.1) decays to:

Since we are dealing with conditional probabilities on a set of events that are too large for a grammar with a natural language vocabulary, it is practically impossible to estimate this probability. Therefore it needs to be approximated by the formula [79]:

Example: A probabilistic association grammar stores the following parameters (The nth word is the “dummy” word Wn used in the algorithmic analysis in Figure 3.4):

Suppose the sentence “I bought a flower” has two analyzes L1 and L2 as shown in Figure 3.20 below: 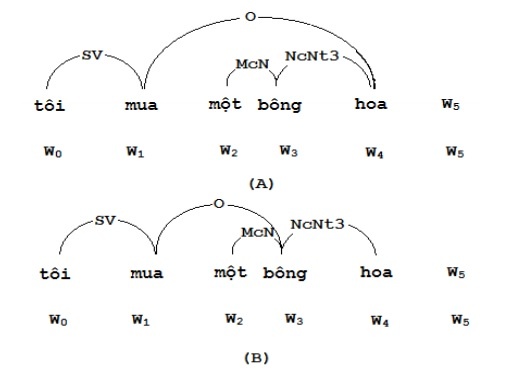 Figure 3.20. Two analyzes of the sentence “I bought a flower”

If one of the two analyzes had to be selected, L1 would be chosen.

In [79] only probabilistic models are given for grammars associated with inner and outer probabilities similar to forward and backward probabilities in the HMM model. The thesis has proposed a Viterbi-type algorithm for the associative grammar model. 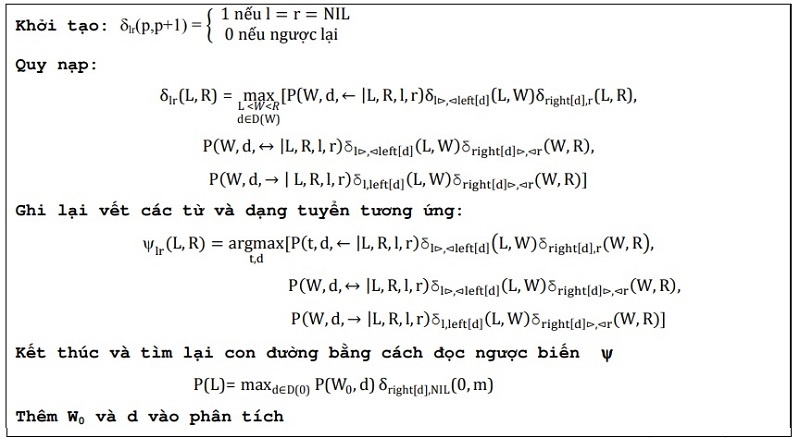 Figure 3.21. Viterbi-style algorithm to predict the analysis with the highest probability