THESIS OF MASTER OF EDUCATIONAL EDUCATION

Vietnam is a multi-ethnic country with 54 different ethnic groups. The Cham are an ethnic group belonging to the Vietnamese ethnic community, currently living in many central and southern provinces, concentrated in Ninh Thuan, Binh Thuan, and An Giang provinces. The Cham script has existed for a long time and is transmitted and cherished by the Cham people, but it is less widely spread among all classes of people, but mainly for the field of belief and religion in order to study rituals and ceremonies. ; or only a part of the Cham people use to learn the customs and habits of the Cham people. With the policy of the Party and the State on ethnic minorities’ policies and writing, the official documents of the State of Vietnam from the first Constitution to the recent ones all agree on an important point. Point: Respecting the rights of ethnic minorities to exist and develop, while supporting the development of their language and writing. 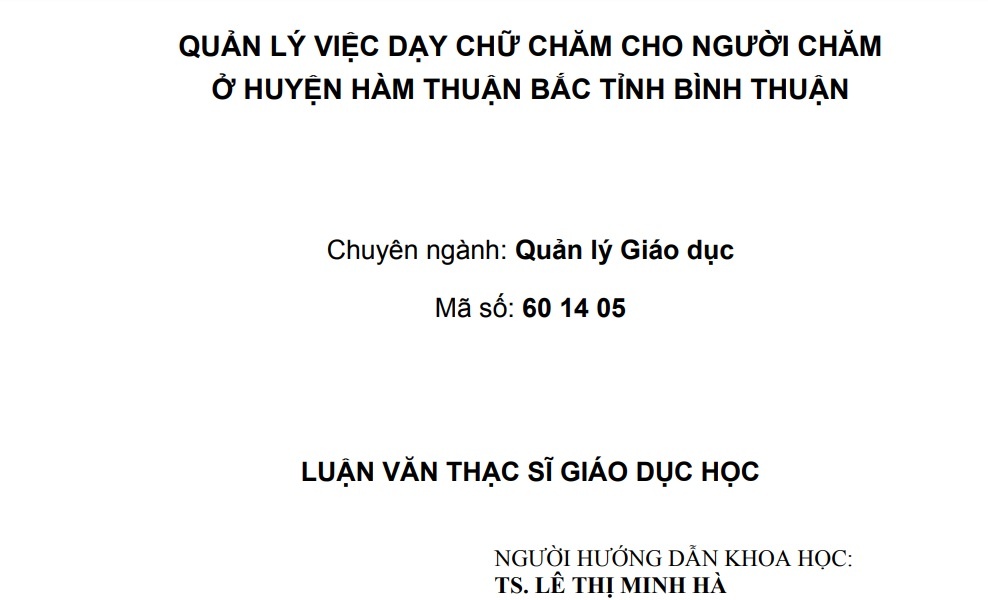 The Constitution of the Democratic Republic of Vietnam in 1960 stated: “Ethnic groups have the right to use their own language and script to develop their own culture”.

Government Decision No. 53/CP dated February 22, 1980 reads: “The existing voices and scripts of ethnic minorities are respected, maintained and helped by the State to develop. Ethnicities. the unwritten minorities are helped to build their writing according to the Latin script”[10].

The Law on Universalization of Primary Education in 1991, in Article 4, reads: “Primary education is conducted in Vietnamese. Ethnic minorities have the right to use their own languages ​​and scripts along with Vietnamese to carry out primary education[21].

The 1992 Constitution of the Socialist Republic of Vietnam reads: “The State implements the policy of equality, solidarity and mutual assistance among ethnic groups, prohibits all acts of ethnic discrimination and division. Ethnic groups have the right to use their own language and script, preserve their national identity and promote their fine customs, traditions and culture.

In order to implement the Party and State’s policy on developing the language and writing of ethnic minorities, more specifically the Cham ethnic group’s language and writing, a number of primary schools in the Cham ethnic minority area In Ham Thuan Bac district, teaching Cham language to Cham students has been conducted. However, the need to learn Cham letters is not limited to primary school students, but many Cham people, especially teenagers, want to learn their own ethnic letters. This is a legitimate aspiration to contribute to raising people’s intellectual level, preserving and promoting cultural traditions in the Vietnamese ethnic community, reflecting the correctness of the ethnic policies of the Party and State.

As a language of ethnic minorities with an average population of 54 ethnic groups in Vietnam, the Cham language together with the Cham culture plays an important role in contributing to the formation and construction of the Vietnamese culture. culture in Vietnam and is considered a subject in the primary education system for Cham students. The broadcast in Cham language and the introduction of Cham language into teaching in schools were enthusiastically received by the Cham people. Cham language is now one of the ethnic languages ​​broadcast on the mass media such as: Radio Voice of Vietnam, Vietnam Television Station, Binh Thuan Province Radio and Television Station, Radio – Television Station. Television in Ninh Thuan province and the magazine Ethnicity and Mountains published by the Vietnam News Agency in Cham language have brought the Cham people a lot of valuable information[34]. However, in order to fully receive the above information, the Cham people need to have knowledge of Cham characters as a transmission tool.

Currently, the Cham language has different variations and different types of writing, which are the original Cham and the variant Cham. In daily communication, the Cham people use a variant of the Cham language, while over 60% of the Cham people (especially those under the age of 50) do not understand, or understand very little, the ancient Cham language being broadcast on the Internet. broadcasting media [34]. Thus, in fact, most Cham people do not understand well the contents of articles published in Cham magazines or on Cham radio waves, because it is understandable that the majority of Cham people are still illiterate in Cham. . Because of Cham illiteracy and because they usually only use the local language with many spelling errors, or no longer remember the vocabulary of their mother tongue but are replaced by many Vietnamese and foreign words, most people Cham cannot read the word Cham on the newspaper or have not heard and understood all the standard Cham language broadcast on radio waves. That proves that the Cham language and writing are increasingly lost. If there is no timely and proper preservation, the Cham language will gradually lose all its role in the Cham’s social life. . Meanwhile, the Cham language taught to students in primary schools is not strong enough to play the role of preserving and developing the Cham language and script. One of the solutions to prevent children from forgetting Cham after primary school and also to make adults literate in Cham is to conduct classes to teach Cham characters for adults (ages 15-45). However, up to now in Binh Thuan province, Binh Thuan province’s government has not organized the teaching of Cham characters for all Cham people of primary school age.

Research topic “The management of teaching Cham characters for Cham ethnic people in Ham Thuan Bac district, Binh Thuan province” in order to meet the legitimate thoughts and aspirations of the Cham ethnic people, to make the Cham people aware. Once you learn the Cham script, you will receive a lot of useful information in life, learn the customs and habits of the Cham people through ancient documents, contribute to the development of education in ethnic minority areas, preserve national cultural identity, improving the material and spiritual life of the Cham people, creating solidarity and demonstrating ethnic equality among the ethnic communities in Vietnam.

If we manage to teach Cham script to Cham people, it will create good conditions for Cham people aged 15-45 to participate in learning Cham script, at least at the level of knowing how to read and write.

6.1. System of some theoretical issues related to the topic.

6.2. Research on the current situation of the need to learn Cham characters and the organization of teaching Cham characters for 15-45 year olds in Ham Thuan Bac district, Binh Thuan province.

7.1. Methods of analyzing and synthesizing documents

7.2. Method of survey by ballot

Survey about 300 Cham people aged 15-45, in 3 communes of Ham Thuan Bac district with a large number of Cham ethnic people living in order to find out the current situation of learning Cham characters (Cham literacy level, needs, objectives). purpose of learning Cham characters). Determining the level and frequency of the need to learn Cham language, the form of organizing Cham script classes for the elderly.

Survey (interview by questionnaire) 50 people, including some religious dignitaries, village elders, village heads, intellectuals and teachers of the Cham people to confirm the needs, purposes and other proposals of learning Cham script. .

Investigate principals at primary schools that teach Cham language, Cham teachers and some staff of the Department of Education and Training and Training in order to comment, supplement and complete solutions for management of teaching Cham language. .

Research on the legitimacy, necessity and significance of the management of Cham writing classes for the Cham people (From June 2006 to July 2006).

* Surveying the current situation of Cham literacy, the needs and purposes of learning Cham letters of the Cham people aged 15-45 through about 300 questionnaires (August 2006).

* Survey about 50 interview questionnaires, find out the aspirations of the village elders, religious dignitaries, intellectuals in the Cham community about the meaning and necessity of organizing Cham literacy for the Cham people. August 2006).

* Study on the current situation of the contingent of Cham language teachers in Ham Thuan Bac district (September 2006).

* Survey on the current situation of the management of teaching Cham characters to the Cham people in Ham Thuan Bac district (September 2006).

« The Pragmatic Aspect Of Pn Contains Direct Questioning. We Stand On The Pn-Hierarchy Point Of View, Considering The
Managing the teaching of Cham characters to Cham people in Ham Thuan Bac district, Binh Thuan province - 2 »