Following [87], we need to distinguish the following GT goals: according to the nature of the goals associated with practice, we have: practical goals, NN goals. The practical goal is beyond the action of words. Speech acts using language as a means to achieve practical purposes and based on it to select and combine linguistic elements to create PN with purpose and pragmatics; According to the function of the target, we have: cognitive target, action target. The cognitive purpose of the act of speaking is to make the receiver, after receiving the content of the PN, become in the same perception as the transmitter about the reality in the mentioned PN. 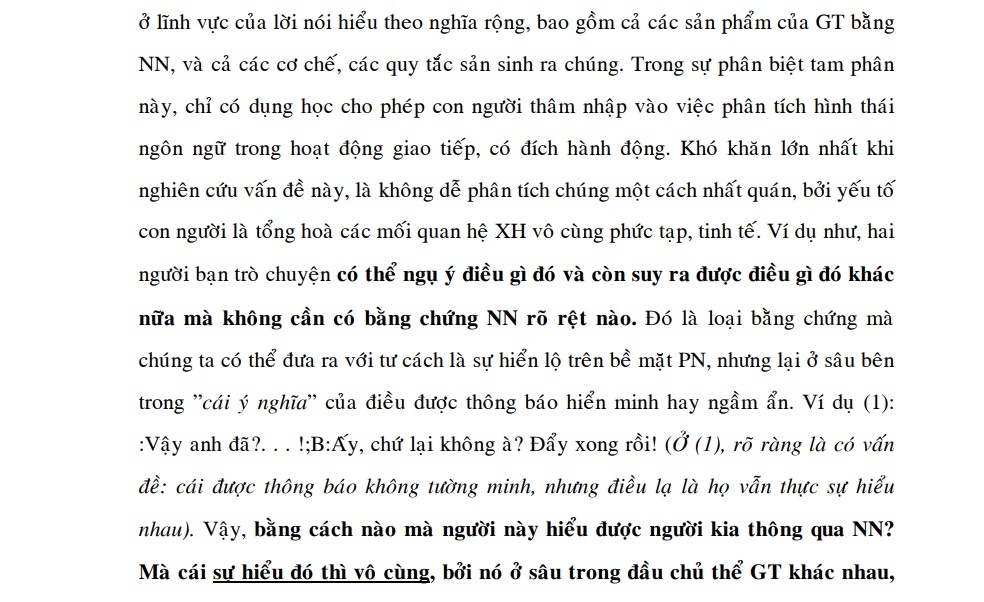 The purpose of the act of speaking is to make the recipient have a certain change in his psychological and emotional state and then, make the choice to have a response action in accordance with the wishes of both roles. . The act of speaking is not only about communicating information, but also to realize the purpose of GT. The actual goal is the impact target, and the real goal of the state is the cognitive goal. In fact, these types of purposes are intertwined, interacting with each other, one is the support of the other, coexisting.

So the main problem of the thesis is the decisive role in the selection and purposeful combination of state factors. That choice is made according to the selection structure, according to certain selection rules; touching means, language level: phonetics, vocabulary, semantics, grammar…; the language aspect: learning end, meaning learning, pragmatics; select the most suitable factor among the extremely diverse of NN. Conclusion is the study of the relationships, arrangement and organization of speech morphology in the sequence of speech. This type of research, in general, does not take into account any worlds or events in the world to which the forms indicate, or does not take into account who uses those forms.

Pragmatics is the science that studies the relationship between the linguistic form and the user in the functional activities of the language, the study in the field of speech understood in a broad sense, including the products of GT by NN, and also the mechanisms and rules that produce them. In this threefold distinction, only pragmatics allows people to penetrate into the analysis of linguistic morphology in communicative, action-targeted activities.

The biggest difficulty when studying this issue is that it is not easy to analyze them consistently, because the human factor is the sum total of extremely complex and delicate social relationships. For example, two friends conversing can imply something and infer something else without any obvious NN proof. That is the kind of evidence that we can give as visible on the surface of PN, but deep within the ‘meaning’ of what is being communicated explicitly or implicitly. Example (1): :So you did?. . . !;B: Ay, but no? Push done! (In (1), there is clearly a problem: what is communicated is not explicitly stated, but the strange thing is that they still actually understand each other.)

So, how does one understand the other through NN? And that understanding is infinite, because it is deep in the mind of different GT subjects, with infinite facts of the objective world, how can the communicator determine and refer to them correctly? corpse? What is said is always more than what is said. Applying communication theory to study the act of asking in business communication, we not only present the linguistic form but also know how to present the pragmatic side when the communication activities of that language form.

We pay attention to the rules of conversation, the principle of conversational collaboration of H. P. Grice (1967), [36, p. 229], in the study, the main object of the thesis is the operating system.

We pay attention to the conclusion of L. Bloomfield, stated in the book “Le Langage” regarding the problem of NN stimulation and NN-induced reflexes: “NN creates conditions for people to perform R reflex when a person other is stimulated”. But that reflex is not cooperative and social, so it is not a foreign activity in the true sense of the word. The OS in the thesis belongs to the social activities (associated activities), and the unilateral state activities are not taken into account. The CTLC that we propose meets the conditions of the rationality of the speaking activity plan and applies the above NN stimulating factors.

1.1.5. Some problems of pragmatic theory

These are issues analyzed through several aspects of the problem of unspoken (unnatural) meanings. Dialogue presumptions include the speaker’s and listener’s shared understanding of the world to which they are concerned.

The presuppositions of PN are the knowledge, which is what the speaker thinks is true before performing a PN (the speaker has the CEO, the sentence does not have the CEO), and what the listener also thinks is true after. when listening to that PN. Entailment is what follows logically from what is asserted in that PN. Sentences lead, not the speaker.

Like (2): “My sister bought a great deal of hats!” (The CEO is my character existence; I have a second sister; this sister is a businessman… All those CEOs belong to the speaker and they can be wrong in fact. As for the hints. is my sister Hai bought something, was the shipment a good deal…. Those quotes are from the close-up of the quoted sentence, they are reported outside of what is said). The basic attribute of CEO is immutability, not controversial when negating.

If two parties disagree about the CEO, it will often cause controversy. This is also one of the ways to create YNHNH. The selection and presentation of the sequence of citations was previously considered by George Yule [183, p72] and said that citation is not a pragmatic concept, but a purely logical concept.

We believe that the problem of choosing citations, arranging references in a logical sequence, is clearly pragmatic. Because, through the sequence of inferences and inferences inferred from the close-up, the speaker can announce what the speaker believes the listener might think, that is, through the manipulation of inference and association. idea, making it possible for listeners to know without having to display it on the surface of the PN.

Conversation is always collaborative, the speaker believes that the listener is ready to cooperate with him, and the listener, when he hears a PN directed towards him, understands that the speaker is collaborating and intending to announce a something with me. That “something” must be more, wider, deeper than what is shown on the surface of PN. YNHÂ, implied, implied, alluded to (implication), only Grice called by the term (implicature). Those are the meanings that are conveyed indirectly through the verbatim of the citation, by using the ND meaning of the verbatim to make it possible for the listener to infer other ideas. To present YNH NH, the speaker always attaches a purpose and belief that the listener is capable of revealing the intended meaning in that context, on the basis of what is known. , CEO and comments. The implication is that what is communicated is more than what is said, to understand them we must admit that there are four principles of cooperation (quantity, quality, relation, manner) (Grice) [36; 72]. Most YNHNH comes from a natural, explicit meaning created in a certain context, co-operated by speakers and listeners, sharing and dependent on each other.

Above, we have mentioned the broad context and the narrow context but have not mentioned the problem of context restriction, (ie how to determine the spatial and temporal compatibility of a particular PN). The problem of local interpretation in discourse analysis is how listeners and researchers when listening to a PN must know how to create a limited context that is closely related to reference. The principle of local hypothesis is based on personal experience, predictability, and hypothesis formulation about relevant aspects of the context. Example (3): B: The general is delicious, but…!

B: That’s what you came up with yourself, when did I say it?

(In (3) the first PN (B) describes one event and the second PN (M) describes another event… The researcher may consider them unrelated. However, The principle of local hypothesis will show us how to build a limited context, in which there are two characters buyer and seller are bargaining MB for a certain item; TXH “tui” “he” “sister” was used to refer to two related characters; The role of the bad word in (3) plays an important role in building a limited context.At the same time, within the context of PN , when the seller denied what she said implicitly, the listener in the conversation also used the principle of local hypothesis about time, place and object to determine the problem… .

The principle of analogy inference is a calculation method, proceeding to choose one of the solutions that is said to be the most optimal. It helps to create a coherent, consistent message that is compatible with other elements in the language.

Politeness is the connotative concept of “polite social behavior”, or etiquette within a culture, which specifically regulates interactions. It is a means of expressing the perception of the face of others [194]. Face is an image of a person related to social and emotional meanings in behavior.

People always want to be respected, have face wants, face saving act, in contrast, face threatening act [183]. Politeness is contained by the activity (gestures, attitudes, eyes…). For example, a buyer goes to a seller who is an acquaintance, after choosing the goods, asks for a price, agrees to buy, but checks his wallet, there is not enough money.

At first, the buyer may rummage through his bags, looking rather blatantly in his pockets, but with a vague intention that: trouble will be noticed; Or maybe with an apology, a promise…. Politeness is expressed in words such as: expressing the contract in YNH NH more than the explicit meaning such as insinuating, … or cursing to avoid putting the opposite person in an awkward situation, or tentative greetings, calculate the spear head accordingly; the second is to use the strategy of friendly politeness, respect…; the third is to use polite wording: Sorry; Whether; …ask when not…