The thesis also helps readers to clearly see the difference between the nuances implicit in the act of asking in the buying and selling environment in daily life, with the nuances implicit in the artistic text. It is not the product of the aesthetic rhetorical process of the figurative thinking manipulation of language in artistic texts, but in fact the creation of pragmatic meaning with different presupposition levels, according to the interaction between the principle of politeness, the principle of cooperation, together with the breaking of the maxim of the conversation in terms of quality and quantity separately, according to a linguistic standard chosen to achieve a specific communication purpose. . 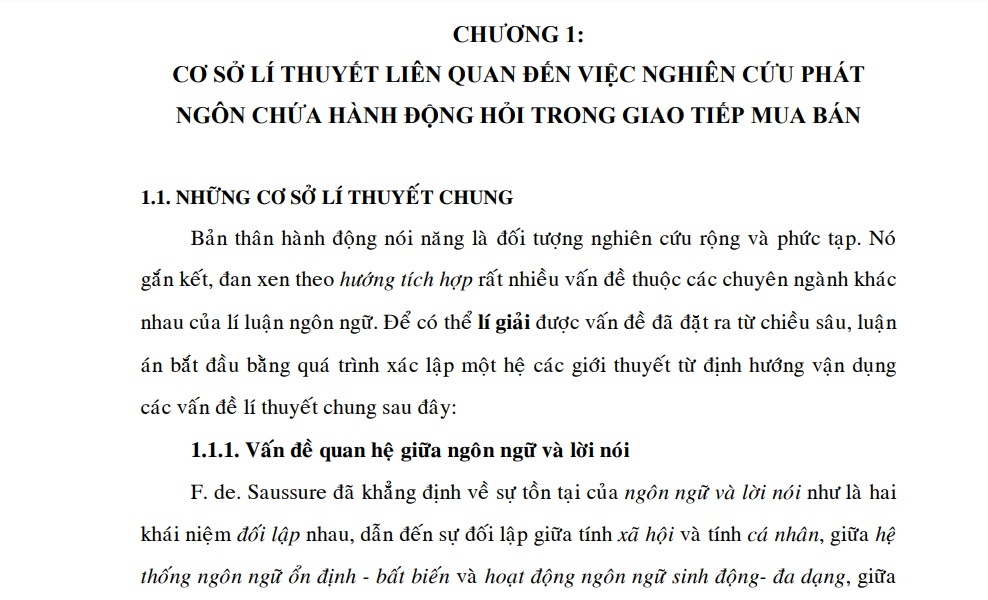 The thesis provides a basic framework to raise the semantic function to a pragmatic function, thereby, showing the main orientations on how to violate the pragmatic principle in the mechanism of creating the meaning of the pragmatic function with the influence of each other. each other at levels. Thus, the mechanism for creating implicit meaning belongs to the linguistic element (which is one of the three structural elements) that helps in the choice of the structure to choose the implicit meaning.

The thesis has made certain contributions to language standards in the scope of trading, overcoming limitations by changing habits. That needs the combination of the whole community, writers, journalists, linguists, including the support of policies and laws of the state.

In addition to the Introduction; Conclude; Appendix; References and dissertations include:

Chapter 1: Theoretical basis related to the study of utterances containing the act of asking in business communication.

Chapter 3: Implicit meaning and mechanism for creating implied meaning of utterances containing the act of asking in transactional communication.

Chapter 4: The utterance and the address of the utterance contain the act of asking in business communication.

The act of speaking itself is a broad and complex subject of study. It connects and intertwines in the direction of integrating many issues of different disciplines of linguistic theory. In order to be able to explain the problem posed from depth, the thesis begins with the process of establishing a system of precepts from the orientation of applying the following general theoretical problems:

1.1.1. The problem of the relationship between language and speech

F. de. Saussure affirmed the existence of language and speech as two opposing concepts, leading to the opposition between sociality and individuality, between the stable – invariant and active linguistic system. vivid language – diversity, between the social language system, the independence from the individuality of speech and language activities. We apply to the thesis research the view of the reciprocal relationship between language and language activities: “Nutrition is necessary for speech to be understood and effective, but speech is necessary. for NN to be established. Historically, the fact of speech always precedes… In the end, it is words that make language change” [67, p.41].

Many other authors pay attention to the distinction between NN and speech, but many disagree and consider that dichotomy to be extreme. In addition to absorbing the point of view that distinguishes between language and speech, we disagree with his opinion that the study of agricultural activities is associated with a major part with the subject being agriculture; a secondary part with the object being the individual part of the language activity, that is, speech. Applying to the study of utterances containing the act of asking in business communication, we find that, in fact, it is impossible to assess which is the main part and which is the secondary part.

We also agree with Saussure when he thinks that, in linguistic activities, in each individual word, creativity, flexibility, and “newness” are all created from the material itself. NN. So, language and speech are two sides of one being, they have a close relationship, inseparable, mutually defining each other. Pragmatics is a discipline that not only studies “speech”, but also studies linguistic competence and pragmatic competence.

The key issue demonstrated by the thesis is that: native speakers not only know the rules that produce grammatically correct sentences, but also know how to use those rules at the right time and right. the right place, the right position, the right purpose, which means to influence the audience in the most effective way.

The thesis always maintains the point of view of putting the speaker and the receiver at the center of the communication and understanding process. It is the speaker who gives the topic, content, presuppositions, frame of reference, information structure…; and listeners understand, decode and draw their own conclusions in the communication process itself. We look at the problem by separating it from relationships, and vice versa also study it in terms of reciprocity, mutual regulation. Thus, the study of speaking activities is coherent, intertwined, integrates many issues of other disciplines and is not limited to describing linguistic forms independent of purpose or function, but attaches communication theory to the form of language. language, the communicative purpose of language.

Lyons argues that the concept of GT refers to feelings, states and attitudes, but he is only interested in the transfer of information containing practical and judgmental purposes. Bennett (1976) also observes, “GT seems to be primarily a matter of the speaker either to inform the listener of something or to enable him to perform a certain action” [194, p. ].

For example, when a seller meets an acquaintance at the market (I don’t know if he intends to buy or not), in the middle of the sale, the seller turns to the acquaintance and says: “Oh my god, it’s been too long, boy is it big lately?”, it is hard to say that the main intention of the speaker is “transfer of information”; which makes more sense: the speaker is starting a conversation and suggesting a purchase offer…

Therefore, we study the act of saying that is interested in the function and purpose, the way to generate the code and interpret and process the NN code of the PN associated with the context element; that is, the study of pragmatics from a dynamic point of view. Apply Morris’ definition of pragmatics as “the relationship of the sign to the user”. We are really interested in what the users of NN are doing and interpret the “new” layers of meaning, which feature NN in the operating system as a means to accomplish the main purpose (explicit or implicit) of what they are trying to do. doing. We also follow Do Huu Chau [38], communication activities, including: context, have 3 factors: GT character, GT content, GT situation. Nunan (1997) called this the extra-NN context. The character GT includes the transmitter and the receiver: when the PN is to inform, the transmitter is forced to choose the ND first, then choose the appropriate expression.

In GT, the transmitter usually counts as one, but the receiver can be one, or it can be more than two. In the case of the majority, we need to distinguish between the real recipients and the general recipients. The GT content (or the fact talked about) is the result of the choice of reality introduced into the content of the message transmitted to the receiver, for some GT purpose. The context of GT (in a broad sense) includes all natural, social and cultural circumstances of the ethnic community in which the GT characters are present, which will govern the content and form of the utterance.

They usually do not participate directly in GT but only participate in the form of experience, knowledge of the role participating in GT. Therefore, there are authors called encyclopedic presuppositions. In a narrow sense, GT context refers to a specific place, with specific happening situations, specific characteristics in the GT environment. People will have to choose specific messages to suit the GT context and vice versa, the GT context will directly or indirectly affect the HT and ND of the PN or the speaking activity. The second is the GT target: GT people always associate the utterance with the GT target.