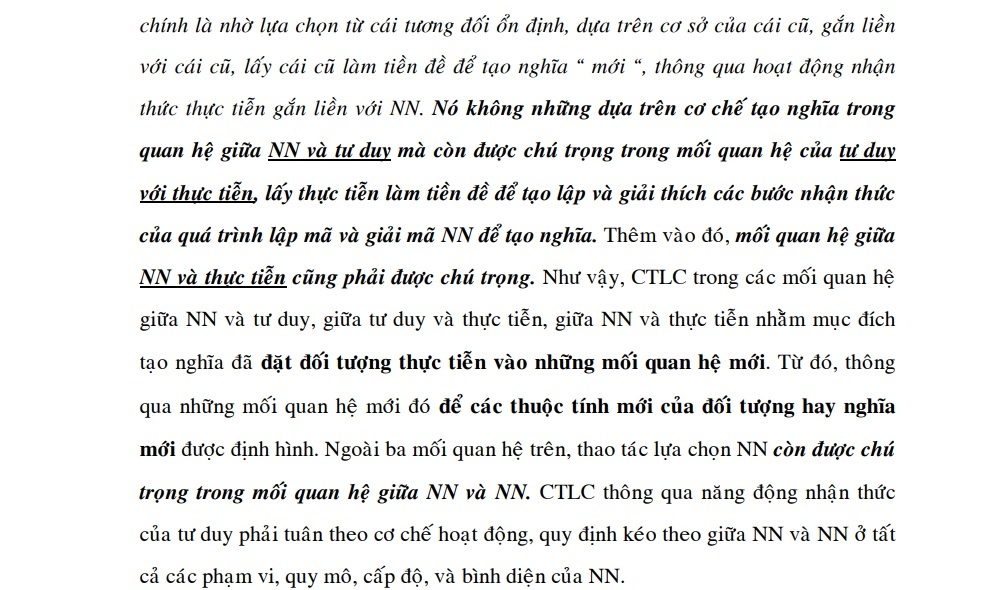 a. Steps for CTLC to code:

First, the transmitter must select the ND, so that it is suitable for GT purposes.

The transmitter will choose, considering the parameters on the receiver’s side, and must take into account the possibility of the right to accept, agree or disagree. (From there, it is possible to decide which ND and HT are suitable for the message ND to be transmitted).

The next step is to select and consider the ways the HT is presented to match the ND that the transmitter has selected before speaking.

The final step is to complete the PN with a certain intention combined with factors such as: context, location, output, CEO, language activity, CTTB, social language…

b. Steps for CTLC decoding:

The first is that the receiver has to come up with multiple interpretations of the ND to match what is being communicated by the sender.

The next step is that the receiver will choose and consider the parameters on the transmitter side and on his side, so that he can decide which ND and HT to choose for the response message. about to be transmitted.

The next step is to choose and consider ways to express it in accordance with the ND that the recipient has selected before speaking.

The last step is to complete the PN with certain communication intentions combined with factors such as context, location, output, CEO, verbal activity, and program.

1.2.2.8. The relationships of choice structure

1/ Structure choice in the relationship between form-content

In the dialogue, when the speaker takes turns to take the right to speak (floor), they are forced to organize the structure of HT and ND meaning (explicit meaning, YNHANH, old meaning and new meaning…). They have to organize “packaging”[183, p. 157], that is, to select, organize, and arrange their messages according to what they think the audience knows and does not know. When studying the speaker’s part of the meaning, the CTLC must necessarily find out how the speaker can make inferences about what is said, in order to arrive at an understanding of the meaning the speaker intends to convey. , or how a great deal of the unspoken is perceived as part of the ND of what is communicated.

Then, in turn, CTLC itself will have the effect of re-dominating the selection of NN morphemes, returning to better serve the pragmatic aspect of NN morphemes. CTLC is related with significance in the choice of HT structure corresponding to ND structure. The meaning and purpose of CTLC mainly expresses what is communicated by the speaker and what is understood from that message by the listener or what one wants to say through the PNs rather than with what the words themselves phrases in those PNs can say. Thus, the study of CTLC is the study of the meaningful part of the speaker.

Up to now, the most difficult thing in the practice of agricultural research is to identify and explain the relationship between ND and HT in a stable and available system. Identifying and explaining the relationship between teaching and learning is even more difficult in the context of knowledge [92] Because in the realism of linguistic activities, the aspects of learning, semantics, and pragmatics are medium entities. concrete, abstract, express at the same time, and rely on each other to exist, it is difficult to separate them clearly. When it comes to the pragmatic level of speaking activity, one is forced to touch on the epistemology and semantics, the logic of the perception of the transmitter and the receiver and the logic of objective reality itself. love) are perceived by them.

On the contrary, the transmitter itself has to comply with the cognitive logic and the logical law of objective reality by performing the existing CTLC to achieve the NN goal. The CTLC will perform the important task of how to express the natural logic, the attachment and binding in a “reasonable” way between theory and theory, between cognitive laws and objective reality, between the sender and the receiver, between the explicit meaning and the YNHA, between the HT-ND really need to be conveyed deep in the NN signal… To achieve this, we have to pay attention to the premises that form the With the above-mentioned natural logical attachment, the premise of CTLC must be based on active thinking activities with the rules of syntagmatic and associative relationships.

CTLC must also adhere to the principle of integrity. CTLC is the HT-ND holistic structure. This overall structure is created on the basis of awareness of selection, adjustment, calculation of distribution so that it is reasonable to promote all possible semantic potentials. It shows the two-way interaction: between the whole – each element in the structure, between the text and the text, between grammar and semantics – pragmatics.

CTLC adheres to the principle of individuality, meaning here is not only the generality belonging to society, but also the specific individuality and specific context.

CTLC adheres to the principle of specificity, which means that the selection operation cannot be separated from the syntactic system and the associative system of cognitive thinking”, if analyzed to the end, abstract entities are always based on on specific entities. There can be no general abstraction without the underlying material elements, and it must always return to those concrete elements”.[72]

CTLC adheres to the principle of extensibility, because the message function of NN is always “open”, that is, when choosing NN for encoding and choosing NN for decoding, we have to expand our consideration of the expressions. expression of NN morphology, expanding the scope of morphological representation “beyond the outside,” so that “new” meaning can be discovered through the role of the notification function. We need to repeat the view that what is communicated is always more than what is said.

Examining CTLC in close relationship with the dynamic activity of thinking is based on the point of view: semantics is not something completely available in the system, but semantics and especially “new” meanings are created. Therefore, since the word CTLC has a NN purpose, the new meaning is formed more dynamically, changing, developing richly and diversely, always supplementing what is already available in a specific context.

Derived from the law of relationship between thinking-NN; from the dynamic activity of awareness associated with practice as a premise for diverse agriculture; Language as a premise for thinking towards practice to operate in a oriented way, Marx said: “A state without thought does not exist, and thought must be expressed in the natural substance of language. Therefore, thinking constitutes the design of the state, and the state in turn is the fixed thing, realizing thinking” [100, p 66]. Thus, language is a means of conveying meaning, but at the same time it is a premise and fulcrum for the further development of “itself and for it”, through the relationship of language and thinking, through the path of development. cognitive development.

The latter meaning (new meaning) is always related to the previous meaning (old meaning), the former meaning serves as a premise for the development of the new meaning. Foreign thinking is the premise to form elements of CTLC, showing the natural attachment of cognitive logic and reality. Analytical writing must be based on typical sociological thinking dynamic activities, with the rules of syntagmatic and associative relationships to create “new” meanings (which can be stable or temporary according to the context), but The “new” is produced by choosing from the relatively stable, on the basis of the old, attached to the old, taking the old as a premise to create the meaning of “new”, through activities. practical cognitive activities associated with agriculture. It is not only based on the meaning-making mechanism in the relationship between language and thinking but also focuses on the relationship of thinking with practice, taking practice as a premise to create and explain the cognitive steps of NN encoding and decoding process to create meaning.

On the other hand, speech is both a product of existence and not a product that exists as potential in the mind of each person, unlike a dictionary, whose copies are the same, distributed among the people. each individual. Thus, CTLC creates speech as both a medium for both the speaker and the listener; operate under a mandatory, rule-based institution; It is both a diverse and creative activity of each individual, with a very distinct personality.