With the dynamic thinking activities of coders and decoders in communication activities, they have taken advantage of the overlapping phenomenon arising from the pressure of non-linguistic categories, combining linguistic elements, thereby , turning the language of the message structure into a reference expression with hidden pragmatic potentials in creating meaning, on the basis of maximizing the profound social nature of language through individual thinking. typical and familiar sociolinguistic form of a group of people in a society.

Sociolinguistics is the use of social factors to explain language. It refers to the psychology of communication, its own sociability, its own way of understanding, its way of relying on specific linguistic and non-linguistic factors. and familiarity of a class of people, a group of people in society. The specific sociolinguistics in the thesis are the classes of buyers and sellers.

In other words, under the pressure of non-verbal factors, the choice structure has taken advantage of them to choose the object projection, create the act of projecting the object, combined with the linguistic signal element to create its own reference expression. typical sociolinguistic thinking.

Structure selection through the dynamic and subjective processing line of thinking, making use of only the material shell of the signal, turning it into a process of contacting and interacting with the above two factors to reprocess language, to nullifying and suppressing the inherent real meanings of that linguistic signal.

From there, the structure of choice to create explanatory meanings will contribute to creating new meanings (maybe stable or temporary) and create a distinct communication effect of typical sociolinguistic thinking.

– The relationship of three factors is the problem of meaning processing through CTLC, which is the process of nullifying the inherent real meanings and creating YNH, ensuring the movement of meaning according to the principles of semiotics.

It is the combination and interaction of the constitutive elements, through the dynamic and subjective processing of thinking, combined with the cognitive principles of the coder and decoder, the most typical social language. by CTLC. Perception is the cognitive process to create meaning, but the created meaning is not in the language itself, but it depends on the mind and feelings of the GT people themselves. 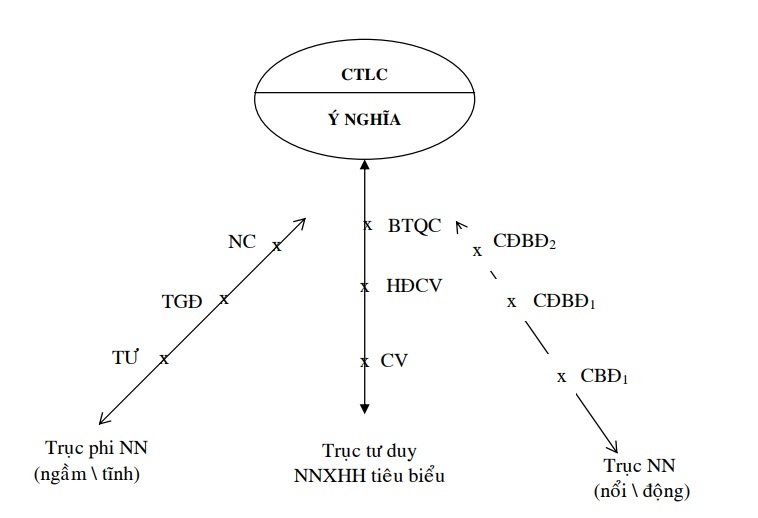 1.2.2.6. Features and conditions of selection structure

The suitability of CTLC is considered an important feature and condition first. For a long time, people often talk only about the appropriateness of the choice in the sender, but little about the suitability of the interpretation for the receiver.

We need to emphasize that the relevance of the message is specified in both directions: sender, receiver. Because when choosing ND, NN signal system, the speaker must estimate the ability to receive information codes and decode information and the suitability for listeners such as: age, level, position, experience, etc. hometown, occupation, context…

Relevancy also partly determines the impact on the audience and the results of that impact. It has an effect on whether the receiver accepts or rejects the ND, the perception of the reality that the transmitter transmits to them.

George Yule (1996) mentioned regularity, regularity [183, p. 23]”people tend to behave in fairly regular repetitive ways” in their use of NN. In other words, it is the tendency to follow the “artificial trails” of the same agricultural community, by repeating it over and over again and quite regularly.

They have the characteristics of using agriculture in the same social group (narrow scope) and in the same social community (wide range). They originate with each member of a social group, on the contrary, they are forced to conform to common stereotypes. Regularity and regularity are both characteristics and conditions to be able to perform CTLC. Without regular and regular use of language usage methods, it is difficult to create habits, difficult to create experiences, resulting in difficulty in choosing to create meaning.

Therefore, if using language in a social group that they are familiar with, which means regularity and regularity, it is easy for foreign language people to become polite and understanding people because they have said appropriate things. . On the contrary, in a new and unfamiliar social environment, we often don’t know what to say and are often worried because we are afraid to say things that are not or are not standard.

In fact, there are sentences that are not wrong, but are not appropriate to the context, habits, customs and habits; but it will convey additional information such as: you are an outsider, a stranger, speaking inappropriately… [see 143]

A: Mary, where are you going?

B: I can’t answer! (accompanied by awkward attitude)

Regularity and regularity in the use of language will lead to a corollary that is habitual and patterned in CTLC. The regularity leads to the existence in the consciousness of each member of the community the habits of both HT and ND meaning, with different levels of awareness. The speaker will need to choose and combine the NN elements out of habit (habit over time will form the common norm).

The choice (based on CTLC) is not only aimed at creating clear and understandable meanings, but also has to rely on linguistic habits to create implicit information, things that do not need to be said more than the system of words. . The habitual choice of language will gradually become traditional and will form standard patterns in speech activities. The norm depends on the habit of the majority of people in the community to accept it as reasonable and right, and most of them understand it if they put them in that context.

In GT reality, what is communicated is always more than what is said. For example, if you talk to a certain friend and say everything, refuse to accept the CEOs of course, surely your friend will feel treated like a fool because there is no such thing. basic knowledge.

That is the habit and the stereotype in CTLC. Habits and patterns are characteristics and conditions for the existence of high-class culture, indicating the rules and rules of selection using state factors and non-state synthetic factors for the existence form of each ethnic group. and of each individual in that community.

CTLC must ensure that the condition is standard. NN standard is a relatively broad concept. Standards are expressed in many aspects: standards of HT, standards of rules, standards of scope of use, standards of style, … Standards are always synchronous and contemporary, which means it recognized as true by all people of the nation in a certain historical period and are considered as mandatory and normative guidelines and will create certain rules of choice that are followed by everyone in the community. consciously, consciously.

Any PN needs to be properly communicated and informed. Accuracy is a feature and also an important condition in CTLC. It not only accurately represents the HT structure, expressed through the correct and appropriate use of NN elements, but also accurately expresses the ND, reflecting the most true reality, then it will help the speaker to reflect. get their subjective intentions authentic and effective; At the same time, helping the listener get the most appropriate explanation and understand the most accurate and correct problem.

In order to ensure the use of CTLC, each person must rely on and voluntarily follow the following principles: must comply with the agricultural practices of society (thoughts, ways of doing) which have become traditional regulations; based on the subtle feelings of the native speaker. Self-discipline is an important trait and condition in CTLC. All are the basis for the standards of cultural language. We also note that the norm is not something that is always constant and stable, but is subject to gradual change from each successive generation. Therefore, we should not be too rigid in seeing the standard. The self-discipline to follow the rules from the HT structure to the ND structure has laid an important foundation and support for CTLC.

CTLC also implies adaptability and creativity. Regularity, pattern, and habitability help the speaker to speak correctly, but not completely in a rigid, stereotyped manner. Humans must be creative and adaptable to reflect vividly rich thoughts and feelings.

In actual use, NN is not absolute. The comparison and selection of NN factors in the CTLC at the comparative and extreme levels are only appropriate and relative best.

When using CTLC well, PN often ensures aesthetics, and vice versa, the good use of aesthetic factors when using CTLC selection manipulation is more effective. Aesthetics here is not only understood in the narrow sense of beauty, but also broadly understood as the correct, appropriate, and harmonious uses of NN and non-NN vehicles in certain GT contexts.

Regarding this feature, at first glance, it seems that they contradict what has been stated above. In fact, they are one of the characteristics that show diversity, complexity, and overlap. CTLC is not always the right standard, it also follows the familiar path of the community, but sometimes it has an unusual element, deviating from the standard, deviating from the path that creates creativity in the coding mechanism and mechanism. the GT’s decoding mechanism. The standard deviation and anomaly in CTLC not only do not contradict, do not contradict the characteristics belonging to the norm, but they are also an important and decisive condition in the mechanism of coding and decoding of speech pragmatics. general, CTLC and indirect contract in particular.

12/ The property is not within the framework of the HT . structure