The thesis focuses on answering the following questions to clarify the pragmatic aspect of the act of asking: What do we do when we speak? What do we really say when we speak? Why did I ask my friend if he could give the book to me, when it was obvious that he could? Who told whom? Who said? Tell who? Who do you think I am to talk to me like that? Is that clear or is it still vague? Apart from the superficial verbal meaning, what other meanings does the utterance have? How can those meanings be understood behind the surface of the words? … The thesis studies on speaking acts, more narrowly asking acts, in speaking events belonging to a broader field than conversational analysis (conversational analysis). ).

In trying to express oneself, one not only creates utterances containing grammatical structures and words, but one also performs actions using those utterances. Study the act of speaking not only in individual utterances, but in a set of utterances.

This is all expressed in the broader field of conversation analysis, which uncovers what and how the linguistic features of conversation are and is expressed. The thesis proposes the structure of choice in the act of asking. The act of asking in the field of communication is a great concern of sociolinguistics in general and pragmatics in particular.

The research and application of them in real-life communication is our first purpose. The next purpose is based on the data of the language of sale, we identify the real elements in the operating system of pragmatic theory and the problems related to this theory from the perspective of application, especially the problem of pragmatics. language standards and politeness factors in business communication. 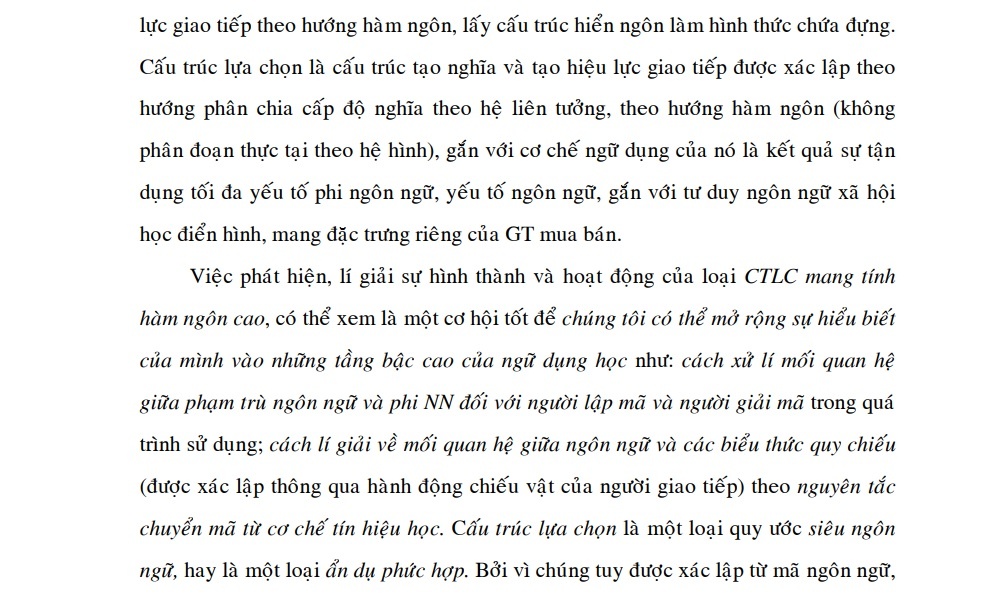 From the above purpose, the thesis aims at the following main objects and tasks:

5.2. METHODS OF HANDLING OF MATERIALS

First, we observe and record the conversation. Next is a corpus diary, recording communicative contextual factors and non-verbal factors. Then listen again, convert the dialogue into written form. Finally, mark the statements containing the act of asking, profiling, classifying, and analyzing documents.

This thesis is carried out in the direction of linking theory with social practice in language use, so we have used the following general methods:

We statistics the frequency of occurrence of elements in the act of asking and asking utterances on the mentioned corpus sources. Statistical results will be used to draw out the characteristics of the research object (quantitative statistics to draw and induct qualitative conclusions) which are practical bases for scientific data authenticity, proof, persuasion.

In addition to using analytical methods, we also use a combination of synthetic methods, generalizing the problem in a grounded way, that is, analyzing and synthesizing, deductive and inductive to handle the problem. good problems.

We apply the method of describing the structure – semantics – the method of constructing utterances with the meaning of asking actions, linguistic and non-linguistic factors accompanying the act of asking…

5.3.4. Methods of investigation and test by interview

We have directly investigated the subjects involved in buying and selling activities in an objective and natural way (see the appendix table).

This method is used to examine the similarities and differences between the factors of direct and indirect questioning, to create the basis for the method of analysis, synthesis, description, etc. to be implemented accurately and effectively. more fruitful.

This thesis is carried out in the direction of linking theory with social practice in the use of language, so besides the general methods, we have used the field method as the main specific method. fact to collect data from face-to-face interviews, voice recordings in the scope of sales. Then rely on and process well the source material to come to conclusions.

6.2. Research on utterances and interrogation is the requirement to provide what is announced by the speaker and what is understood by the listener..

7. PROSPECTIVE CONTRIBUTIONS OF THE THESIS

The first is to categorize the act of asking in a general and systematic way.

The choice structure is the structure that creates meaning and creates communication effect, which is established in the direction of dividing the meaning level according to the associative system, in the allegorical direction (without segmenting reality according to the paradigm), associated with the semantic mechanism. Its use is the result of making the most of non-verbal factors, linguistic factors, associated with typical socio-linguistic thinking, with its own characteristics of trading GT.

The discovery and explanation of the formation and operation of CTLC is highly figurative, which can be seen as a good opportunity for us to expand our understanding into higher levels of pragmatics. such as: how to handle the relationship between language and non-NN categories for coders and decoders in the process of using; interpretation of the relationship between language and referential expressions (established through the act of projecting objects of the communicator) according to the principle of transcoding from the semiotic mechanism.

The choice structure is a kind of meta-linguistic convention, or a kind of complex metaphor. Because they are established from the language code, but in reality, their true communicative effect is often no longer based on the inherent physical meaning of the language.

In other words, the real language here has been coded in the non-linguistic direction and vice versa, it can be said that this is also the process of linguisticizing non-linguistic elements.

This problem cannot escape the radical view of the theoretical mechanism of semiotics with the addition of cognitive linguistics, and with it, it must be an open linguistic vision towards sociology. and cultural studies.