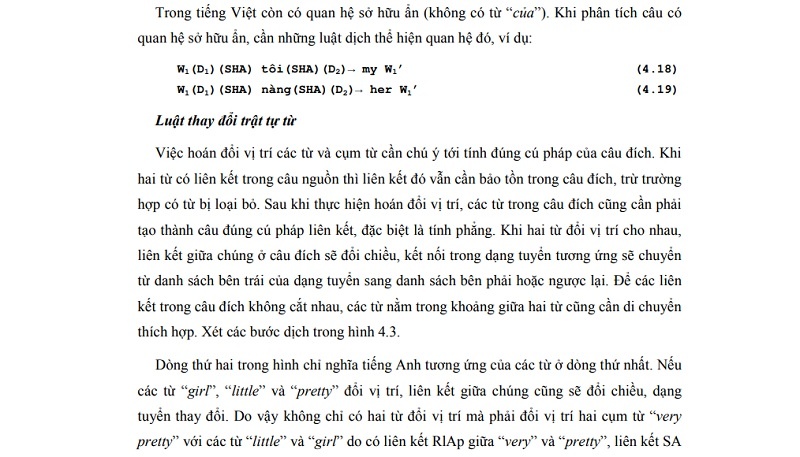 Vocabulary in Vietnamese is very complicated. Even dictionaries have differing views on the wording of the terms of a vocative nature. For example, “we”, “we” appear as a pronoun, but the objects that have the same meaning as “we”, “we” with most dictionaries are considered as two-part phrases. are from. All spoken words are only translated into English as “we”. Likewise, “she” is always considered to be a phrase consisting of the noun “she” and the demonstrative pronoun “she”, “ta”, or the noun “she”. The relationship of the word “she” through the link NtPd+ and SV+ allows translating “she” into “she” , while NtPd+ and O- or EpNt allows translating “she” into “her”:

Then, of course, rules are also needed to assign persona information to the corresponding verb. Obviously word-by-word translation is not possible for high-quality translations because in any language there are phrases that, when taken apart, make no sense or have a different meaning. For idiomatic phrases, an idiom dictionary should be used. The rule is only established for phrases with a specific structure commonly used in Vietnamese.

Phrases with the word “go”

The word “go” plays a rather special role when translating Vietnamese – English. In Vietnamese, the word “go” can be combined with some regular verbs, such as “go swimming”, “go shopping”, “go to school”, “go out”. This phenomenon has been shown in the dictionary associating with the DI link for the verb “go” and some other verbs. In many cases, the translation formula will be go + verb + ing (go swimming, go fishing…)

Law on translation of ownership relations

The second line in the figure shows the corresponding English meanings of the words in the first line. If the words “girl”, “little” and “pretty” change positions, the association between them will also change direction, the form changes. Therefore, not only two words changed positions, but also two phrases “very pretty” with the words “little” and “girl” had to be replaced because of the RlAp link between “very” and “pretty”, the SA link between the two words. “girl” with “little” and “pretty”. The displacement does not affect the flatness of the analysis so we get the final result in the 3rd line.

Figure 4.3. Change the word order for the translation of the sentence “The little girl is very pretty”

The law of changing the position of nouns – adjectives

The law of negative structure translation

The words indicating the negative structure are the negative auxiliary words “no”, “no”, “not yet”… (the word type is Rn). The connection between this type of word and the verb is RnV. When translating this structure, attention should be paid to the conjugation that matches the tense of the verb in the source sentence (the word “not” corresponds to the present perfect, other words translate into the present tense:

The Law of Translating Question Structures

The thesis has provided a context-free grammar to represent rules in machine-readable form. The syntax described by EBNF is as follows:

The following objects are preprocessed and treated as terminators: