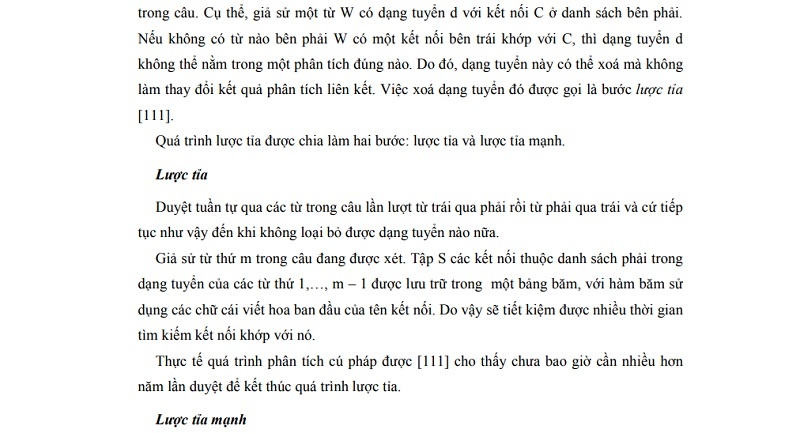 The calculated result of the COUNT function at each call is stored in a hash array (just before returning). In the next time, the result of the previous calculation is looked up in the hash table. Since there is a hash table that stores the results, the runtime cost is O(c2 d) where d is the number of pools and c is the number of connections. For a given grammar, d = O(n) and c = O(n), so the running time is O(n3).

With the formulas presented in Chapter 3, in order to cover Vietnamese syntactic phenomena, the number of selection forms to consider is very large. However, most conjunctions are not used because they contain connections that do not match a connection of a word in the sentence. In particular, suppose a word W has the form d with the connection C in the list on the right. If none of the words to the right of W have a join on the left that matches C, the candidate form d cannot be included in any correct analysis. Therefore, this type of recruitment can be deleted without changing the results of the association analysis. The deletion of that selection is called the pruning step [111].

Sequentially traverse the words in the sentence from left to right, then right to left, and so on until no more forms can be eliminated.

Assume the mth word in the sentence under consideration. The set S of connections in the list must be in a collection of words 1,…, m – 1 stored in a hash table, with the hash using the initial capital letters of the connection name. This will save you a lot of time looking for a match to match it.

In fact, the parsing process of [111] shows that it never takes more than five passes to finish the pruning process.

In contrast the connection is deep. Strong pruning comb is based on the following criteria:

1. The nearest word criterion must be satisfied for both connections to form the association.

2. There cannot be a link between two deep connections.

3. Two connections of a link between two adjacent words must be the last connection in their list.

4. Two connections of a link between two non-adjacent words cannot be the last connection in their list at the same time (except in the case of a large connection).

Although according to [111], after building all the newly-trimmed categories, the thesis has chosen the method of English association analyzers [137], which is to build a tree representing the association formulas. the concatenation of each word, and then pruning the tree before constructing the aggregates. This treatment allows for much faster execution than the one introduced in [111].

If the connection name is treated as operands, &, or, xor are operators, the join formula has the same structure as an arithmetic expression ({X} is converted to X or()). Figure 3.5.below depicts a tree representing the association formula 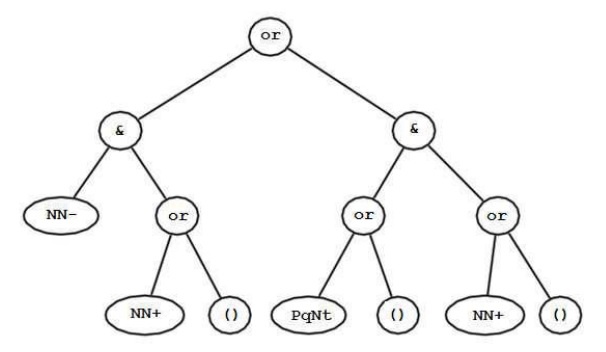 When traversing the association of words for pruning as introduced in Chapter 4, if we find a connection that does not match any of the connections on the right, we will remove the nodes in the tree according to the following rules:

In addition, the following three rules should be applied sequentially.

Of course, the process is still performed in the order of left → right then right → left, etc. The result is the same as the result of two steps of pruning comb and strong pruning comb, but the execution speed is much faster.

The effect of trimming comb in Vietnamese

Because Vietnamese does not change morphology, tenses, forms, numbers … are expressed by adding words, so the number of initial forms of each word, especially nouns and verbs, is much larger than that of English. . However, the pruning algorithms are very effective: after two strong pruning and combing processes, the number of selection forms is only equivalent to English, and there is no need for any sentences in the thesis’s example set. 5 times trimming comb.

In figure 3.6. is a pruning result image made by the analyzer with the phrase “we want to win titles”.

Link parser built in Java, working on Windows environment. To test the parser model according to [111], the thesis has collected 200 sentences, typical for different types from articles on the Internet on a number of topics: Vietnamese conversation, science casual, sport, travel. Below are the results of the program implementation with the sentence “We want to win titles” 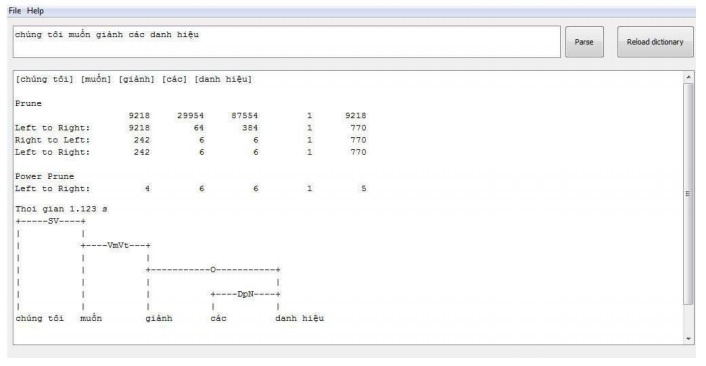 Figure 3.7. Results of the link analysis of the sentence “We want to win titles”