Lending is the basic activity of most banks, so the risk that is concentrated on the loan portfolio is also the most basic type of risk within a bank.” According to the Basel Committee definition, “risk A concentration is any single risk or group of risks that is likely to produce a loss sufficiently large in relation to the bank's capital, its assets, or its total loss. 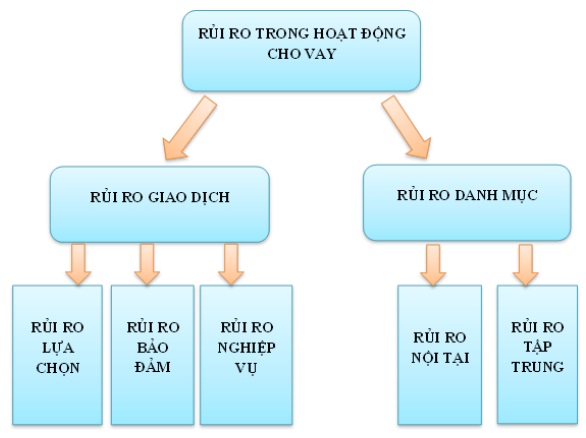 Source: Reference from the book of Banking Administration

2.4 Impact of the loan portfolio to the profit of banks

Traditional banking theory holds that banks need to diversify their loan portfolios, by expanding their lending products to new areas, at which point the probability of a bank's default is increasing. goods will be reduced.

[Diamond, 1984]. Diamond shows that diversification allows to reduce bank risk, risk borne by depositors, and bank supervisory costs. The idea is that due to asymmetric information, diversification reduces the cost of financial intermediation. Furthermore, less diversified banks are vulnerable to economic downturns because they have access to only a few sectors. Many banking crises over the past 25 years occurred, among other reasons, the concentrated loan portfolio of banks supporting the view that the risks are very high using this strategy [BIS,1991 ]. This view is also empirically supported by Argentinean banks regarding the 2001 and 2002 Argentine financial crisis [Bebczuck and Galindo, 2008] and by Austrian banks over the years 1997-2003 [Rossi et al. , 2009].

- On the other hand, corporate finance theory supports the idea that companies should focus their activities on a particular sector or industry group in order to have the benefit of specialization when doing business in these areas. (Jensen, 1986, Denis et al., 1997, Meyer and yeager, 2001, Stomper, 2004, Acharya et al., 2004).

Besides, Benjamin M. Tabak, Dimas M.Fazio and Daniel O.Cajueiro (2010) also concluded that a concentrated loan portfolio seems to improve the performance of Brazilian banks in terms of profitability and default risk. in debt. The index measures the degree of concentration that has a positive effect on returns and a negative effect on risk. The reason is that centralizing loan balances increases supervisory efficiency as banks specialize in the areas in which they lend. Diversification reduces this efficiency because it makes it more difficult for banks to track their credit customers, and banks can also face an edge over other banks.

Thus, the general conclusion is that the relationship between a bank's loan portfolio and returns is a non-linear relationship in bank risk (U-shaped inversion). To be precise, diversifying loan sectors helps banks' profits to be highest when loans have moderate exposure to industry downturns (downside risk); when the downside risk loans are low, diversification has little benefit, when the downside risk loans are high enough, diversification can actually reduce its returns.

2.5 Impact of loan portfolio on risk

First, a portfolio consists of a large number of loans of relatively small value, such that the risk event, if it occurs, the loss incurred by one loan does not have a large impact on the value of the portfolio.

It can be seen that, limiting transaction risk is a mandatory job of all banks in the lending process, in order to minimize the phenomenon of non-recovery of principal and interest of each loan. However, from the perspective of the entire loan portfolio, the portfolio risk depends not only on the individual risk of each loan as an independent existence, but also on the correlation between the loans above. category. The higher the correlation between loans on the portfolio, the greater the degree of risk of concentration, the possibility of a loss that can have very severe consequences for the bank. Therefore, in lending activities, besides transaction risks, commercial banks must also pay attention to loan portfolio risks.

In the early 1990s, in many countries around the world, many research papers and scientific conferences appeared on the impact of concentration or diversification strategy on loan portfolio on business performance. commercial banking business. There have been many large-scale surveys taking place in countries such as Australia, Germany, the US ... related to this issue.

In Australia, there is a similar situation as in Germany: there are scientific debates that involve many researchers as well as bank administrators. Among those studies, the most prominent is Stefania PS .'s team

Rossi, Markus S. Schwaiger, Gerhard Winkler 2009. This group used mathematical models to test hypotheses regarding the impact of diversification on a bank's loan portfolio on risk. , performance and capitalization of Australian commercial banks. The survey respondents were Australia's 96 largest commercial banks (by asset size) within 7 years from 1997 to 2003. The conclusions published after the study showed clear benefits of diversification. loan portfolio on bank performance. Specifically, diversification (especially the diversification of lending industries) will reduce the provision for bad debts in the future, and at the same time the bank can operate with a lower capital level, thereby reducing costs, saving resources. force, increasing the efficiency and profitability of the bank. According to this study,Australian banks agree that poor portfolio management is the main cause of poor loan portfolio quality. Since then, banks believe that it is necessary to apply diversification measures in portfolio management, especially the strengthening of supervision according to the Basel committee (through safety standards as well as supervision process) is essential. necessary condition for successful management of loan portfolios at banks.

Many research papers, scientific conferences have used regression model to analyze the impact of concentration or diversification strategy on loan portfolio on business performance of commercial banks. Typically, the following two studies on the impact of loan portfolios on the profitability of banks in Italy and Brazil 2.6.1 Regression model of Acharya et al. (2004)

In this study, Acharya uses the Hirschman-Herfindahl Index (HHI), to calculate the degree of diversification of the industry. The industrial HHIs (I-HHIs) are the sum of squares of the classification weights for the business sectors.

The research paper “The effects of loan Portfolio Concentration on Brazilian bank's return and risk” by Benjamin M. Tabak, Dimas M.Fazio and Daniel O.Cajueiro (2010) uses an unbalanced high-frequency data panel of 96 commercial banks during the 74-month period from January 2003 to February 2009, a composite of 5175 observations. The data for each bank is provided by the Central Bank of Brazil.

The paper analyzes the impact of loan portfolio on profitability by regression analysis. In the regression analysis, with bank profitability as the dependent variable, the study uses the Feasible Generalized Least Squares (FGLS) method. The advantages of this model are that it allows for variable variance and first order autocorrelation. This is because the variance varies between groups and the variance is constant within the group, which is exactly one of the assumptions of the FGLS model. Test this hypothesis using a modified Wald test with the null hypothesis (H0) that there is no variable variance phenomenon. If the hypothesis is rejected, we can conclude that the FGLS model has good results.

The most fundamental question related to this topic is whether loan portfolio concentration increases returns. It can be answered using the concentration measure for profitability regression, as shown in the following regression equation:

- bt is the residual value.

With the meaning of forming a theoretical framework for the entire thesis, chapter 2 has gathered the most basic theories about loan portfolio and its impact on profitability of commercial banks. Topics covered in chapter 2 include:

3.1 Overview of the operation of the Vietnamese banking system

3.1.1 The strong development in terms of increasing the number of banks and the asset size of the banking system

In the trend of international integration, along with the development of the system of credit institutions in general, the banking industry has had great changes in the number of operating units as well as the size of assets. As of the end of 2014, the Vietnamese banking system has 5 state-owned commercial banks (including commercial banks that are wholly owned or controlled by the state), 1 bank development, 1 policy bank, 37 joint stock commercial banks owned by non-state organizations and individuals, 50 foreign bank branches, 5 100% foreign owned banks, 5 joint venture banks, 18 companies finance companies, 12 finance leasing companies, 1 Central People's Credit Fund, more than 1000 grassroots People's Credit Funds and 1 microfinance institution. The existence of many types of credit institutions with different sizes has created favorable conditions to meet the diverse needs of banking services.Not only has the number of banks rapidly increased, the network of branches and transaction offices of the system has also been expanded, in which Bank for Agriculture and Rural Development has the largest network of 2,300 branches and transaction offices. covering locations across the country.