MBBank has synchronously and flexibly used many solutions to create stability in attracting capital sources for business activities.

MBBank mobilizes capital from financial institutions and individuals through many different channels.

Funds mobilized from economic institutions through a sales network of management and vertical support from large enterprises and financial institutions (CIBs), small and medium enterprises (SMEs) and science and technology have brought effective. MBBank's capital mobilization methods are diverse and flexible in order to best meet the deposit needs of business and science and technology customers.

Along with the diversified deployment of traditional capital mobilization products, the implementation of modern banking services such as cash flow management, cash management and financial consulting services of MBBank and other companies. members have brought MBBank a great stability in capital.

MBBank pays great attention to mobilizing capital from the population. This is an activity that plays a decisive role in stabilizing capital flows for MBBank's business activities. Through deposit mobilization of science and technology, MBBank has deployed a series of utilities and products for HCN and is receiving increasing trust from these customers.

MBBank provides loans to organizations and individuals in many forms such as short-term, medium-term and long-term loans; unsecured loans or with special assets; loans in many currencies, etc. MBBank has participated in financing many key economic and national defense projects through credit granting activities. In addition, MBBank implements many credit financing activities for customers who are corporations, small and medium enterprises, for individual economic households as well as individuals to borrow installment loans, serve customers. life or business.

In order to be able to best finance credit for corporate customers, MBBank has established a system of useful and supportive products and services, such as: Project financing for energy, oil and gas, seaports, etc. ; Loan by item/ credit line to finance working capital; Discount loans according to the set of export documents; Loans according to the overdraft limit; Domestic factoring; Equitization loans;…

Science and technology subjects are segmented and evaluated in line with MBBank's development strategy. The granting of credit to science and technology is considered on the principle of prudence, there is a strict control mechanism when lending, and customers must meet all financial conditions, business experience, ethics, ... regulations of MBBank.

The network of more than 800 correspondent banks around the world has helped MBBank's payment activities be quick and accurate, which is highly appreciated by partners. The international payment services that the bank is providing include: Barter payment; Transfer money overseas; Transfer money from abroad to Vietnam; By collection by method of immediate payment (D/P) or deferred payment (D/A) in the role of collecting bank, bank transferring documents; Export letter of credit as advising, discounting or confirming bank; Export letter of credit; Discount on export documents; and Issuance of international guarantees.

MBBank is increasingly diversifying card products, from domestic payment cards to international payment cards. To effectively serve card transactions at POS, ATM or internet transactions, MBBank has successfully connected with Smartlink card system and is an official member of Master.

MBBank is considered as one of the large-scale banks in the banking system with high and stable capital mobilization ability, which has helped MBBank to control liquidity risks well in the difficult context of Vietnam's economy. and the world economy today. In the period of 2010 - 2012, despite facing many difficulties, MBBank made efforts to introduce policies to increase capital for the bank.

The situation of capital mobilization of Military Commercial Joint Stock Bank in the three years 2010, 2011 and 2012 is shown in the table on the next page. 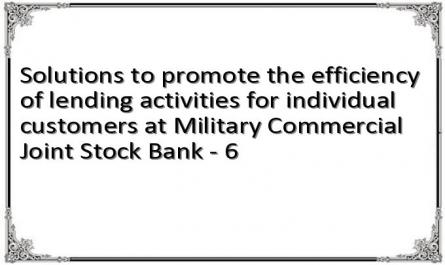 Structure of deposits by term:

Based on the data table, we can see that the total capital mobilized from term deposits has fluctuated greatly over the years. In 2010 and 2011, demand deposits and deposits with terms of less than 12 months accounted for a large proportion in the structure of mobilized capital.

In 2010, demand deposits accounted for 30.55 shares, in 2011 this proportion was 27.41% of total mobilized capital. The proportion of deposits with terms of less than 12 months was 69.35 in 2010, and in 2011 was 72.39%. But by 2012, the bank had a shift in mobilizing structure, mainly from deposits with terms of less than 12 months and deposits with terms of 12 months or more. Because in 2012, the bank was actively looking for new customers who wanted to use ATM cards or payment cards with preferential rates. However, the capital mobilized from demand deposits is not stable and fluctuates depending on the depositor's demand for capital. So,The bank has focused on increasing the structure of deposits with a term of more than 12 months so that it can meet the demand for medium and long-term loans without having to use short-term capital in order to minimize risks and related costs. Mandarin. Besides, MBBank has built many programs and actively implemented such as: "Save MB, be happy in spring, win big", "Save MB, have fun in summer", "Saving MB, imprinting golden fortune" ... Thanks to that, deposits with a term of more than 12 months had a strong transformation, from 65 billion dong in 2010 and 87 billion dong in 2011 to 10,166 billion dong, equivalent to 8.64% of total resources. capital mobilized in 2012, helping MBBank save costs and increase profits this year. Therefore, banks need to continue to maintain existing policies, expand and develop new policies to attract more customers and maintain the reputation of the bank.

Structure by type of deposit:

The difference between funds mobilized from domestic currency and foreign currency can be clearly seen.

Thus, through the above analysis, we can see that MBBank has used diverse, flexible and highly effective forms of capital mobilization to create favorable conditions to meet the capital needs of borrowers. But besides that, banks need to ensure the minimum capital adequacy ratio as prescribed by the State Bank of Vietnam, and take measures to maintain the growth of deposits from customers in the long term.