MBBank provides loans to organizations and individuals in many forms such as short-term, medium-term and long-term loans; loans in many currencies, etc. Besides, MBBank has implemented many credit financing activities for customers who are corporations, small and medium-sized enterprises , for individual economic households as well as for financial institutions. individuals for installment loans, for life or business.

The situation of lending activities of Military Commercial Joint Stock Bank in the period 2010 - 2012 is shown in Table 2.3. 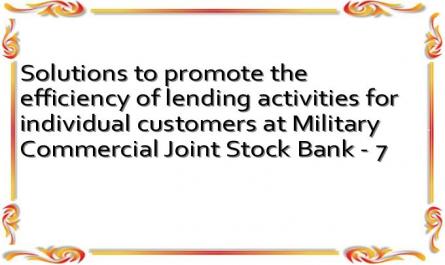 Thereby, it shows that MBBank tends to focus on short-term lending activities. Table 2.1 shows that banks' loans are mainly mobilized from short-term sources (deposits with a term of less than 12 months) with a structure of over 60% of total mobilized capital. Therefore, banks give preference to short-term loans. In addition, because the interest rate race between banks makes borrowers afraid of interest rate fluctuations, so they don't dare to borrow much, borrow for a long time, the demand for loans is not too large and urgent, so short-term loans are a great choice. optimal choice. Especially the financial institutions - the main customers of the bank, the fluctuating interest rates cause the interest payment costs for loans to increase, thereby reducing profits, so the financial institutions give priority to short-term loans.

The proportion of long-term loans did not decrease much, but the number increased, specifically: in 2010 reached VND 5,944 billion, equivalent to the proportion of 12.18%; 2011 reached 7,538 billion dong, equivalent to a proportion of 12.76; 2012 reached 8,565 billion VND, equivalent to 11.50% of total outstanding loans. In early 2011, the real estate market tended to decline, so the bank reduced loans for real estate investment purposes. However, the number of long-term loans increased in number due to the increased consumer demand, especially the need to buy houses and cars. Moreover, the State has introduced a policy to support social housing (a support package of VND 30,000 billion) to help the poor get loans to buy houses. In addition, the State also cut public investment, reduced spending to focus on completing the remaining key projects. The demand for long-term loans is mainly from financial institutions.The interest rate race among banks makes short-term deposit interest rates rise, leading to higher lending rates. Therefore, financial institutions borrow more in the medium and long term to avoid fluctuations in short-term lending rates.

In 2010, because the stock market was developing, financial support and REPO contracts reached a high amount of VND 3,515 billion, equivalent to 7.21% of total outstanding loans. In 2011, these amounts decreased by 2,587 billion dong, reaching only 937 billion dong, equivalent to 1.59 ; 2012 decreased to 567 billion dong, equivalent to 0.76% of total outstanding loans. The reason is that the bank wants MB Securities Company to operate more separately, not depending too much on the parent company, MBBank. Since 2011, the stock market has fluctuated unpredictably, so the bank has reduced the discount of valuable papers of MB Securities Company. As a result, the proportion of financial support and REPO contracts decreased significantly in both quantity and proportion.

Although personal loans only account for a small proportion of total outstanding loans, MBBank increasingly focuses on this customer. The proportion of outstanding loans for personal loans gradually decreased over the years (in 2010 it was 16.16, in 2011 it was 13.89 and in 2012 it was 12.53) but outstanding personal loans are increasing in absolute numbers; in 2010 reached 7,317 billion dong, in 2011 it increased by 756 billion dong, equivalent to 10.33% increase compared to 2010, in 2012 it increased 1,191 billion dong, equivalent to an increase of 14.75 compared to 2011. The reason is because in 2012, The bank has increased marketing to households and individuals, increased the convenience of using the bank's products for customers, etc., so customers increased more. However, because the main loan purpose of science and technology is consumer loans for life, the size of these loans is small. Therefore,outstanding personal loans increased in absolute number and decreased in proportion.

The proportion of financial assistance and REPO contracts decreased significantly from 7.21% of total outstanding loans in 2010 to 0.76 of total outstanding loans in 2012. The main reason was due to stagnant stock market, real volatility. often. Moreover, the bank has increasingly focused on its main operations, leaving MB Securities Company to run the business by itself, MBBank only plays a management role. As a result, lending operations are more efficient.

The amount of capital mobilized by the bank is mainly from local currency, so local currency loans account for a large proportion of total loans. Customers who have a credit relationship with the bank are mainly financial institutions operating in the field of domestic trade and services.

The ratio of overdue debt to total outstanding loans of MBBank increased quite high in 2011 and 2012. In 2010, this ratio was only 2.54%, still within the industry standard (overdue debt is less than 5%). ); but in 2011 this target exceeded the industry standard at 5.66 and increased to 5.91 in 2012. Total overdue debt increased very rapidly, from 1,239 billion VND in 2010 to 3,341 billion VND in year. 2011 and VND 4,401 billion in 2012. This shows that MBBank's appraisal is still not good, has not properly assessed the feasibility of the loan, has limited staff qualifications, and sources of information to make decisions for loans. The loan is still sketchy, incomplete, and detailed about the borrower. In the current economy, financial institutions have reduced profits and revenue, so the source of debt repayment is not guaranteed.

But besides that, Military Commercial Joint Stock Bank has controlled the bad debt ratio at a fairly good level below 2, in 2012, although the whole system had difficulties in dealing with bad debts, MBBank's bad debt ratio was at 1.84 %. However, the total value of bad debts of MBBank increased rapidly in the past 3 years from VND 613 billion in 2010 to VND 1,372 billion in 2012. This result is due to MBBank's appreciation and good performance of credit risk management by how to conduct internal inspection and control throughout the system. The application of the internal credit rating system facilitates MBBank in planning and implementing credit policies, credit risk management policies and customer policies to ensure safe and effective operations. This is also a very good achievement in the lending and debt collection work of the bank when maintaining such a low bad debt ratio.

Guarantee activities: Military Commercial Joint Stock Bank provides a variety of guarantee services such as backup guarantee, contract performance guarantee, advance payment guarantee, payment guarantee, etc. Total income from guarantee fees in 2010 the revenue of guarantee fee reached 209 billion VND, an increase of 88.29 compared to 2009, reached 373 billion VND in 2011, this figure was 452 billion VND in 2012. MBBank builds a strict guarantee process, considers granting guarantees to customers as a loan based on the business plan, the bank's ability to control the plan and the decentralization of approval authority. (Branches/Headquarters/Credit Councils…) guarantees and separates, clearly defines the functions and duties of the units participating in the guarantee issuance process. Hence the risk is minimized. It can be said that, among commercial banks,MBBank is one of the banks with the highest guarantee fee income because MBBank has sufficient financial capacity and reputation for the Beneficiary. At the same time, MBBank can take advantage of its diversified customer base, operating in many areas that can be developed in guarantee activities.

International payment activities: With a system of more than 800 correspondent banks around the world, MBBank's payment activities are fast and accurate and highly appreciated by partners. In 2009 the bank was awarded the bank with a high computing success rate by Wachovia Bank New York. In recent years, although the import and export activities of the country faced many difficulties, MBBank's payment services still increased strongly. By the end of 2010, MBBank's total international payment revenue reached USD 5.3 billion, USD 5.9 billion in 2011 and USD 6.2 billion in 2012, an increase of 5 compared to 2011.

Since 2007 until now, MBBank has always been evaluated as one of the banks with an advanced transaction and risk management system according to international standards and has had a great influence on the Vietnamese foreign exchange market. At the same time, MBBank is highly appreciated by domestic and foreign banks by continuously increasing the foreign exchange transaction limit for MBBank in the context that the reputation of its partners in Vietnam is declining.

Card service: In 2004, MBBank provided Active Plus debit card service to customers, this product has payment features such as POS payment, ATM transfer, personal insurance for owners card . The bank has successfully connected with the Smartlink card alliance system, so customers can make transactions at any ATM in the card alliance. Currently, MBBank has officially become a member of Master. MBBank successfully issued and connected VISA internal payment on December 27, 2010. Accumulated to December 31, 2012, MBBank has issued 10,576 Visa cards and 3,737 Master cards. Newly developed 512 POS, accumulated 1,106 POS. In addition, 61 new ATMs were developed, accumulated at the end of the period reached 388 ATMs.

The bank's business results are always aimed at achieving high profits. In order to achieve positive business results, banks must pay attention to income and expenses, two factors that make up profits. Strict management and cost reduction are as decisive as increasing revenue. The business performance of Military Commercial Joint Stock Bank is reflected in detail below: