Loan limit: Maximum loan amount is up to 500 million VND.

Loan limit: Up to the amount of securities sold (after deducting transaction fees and loan interest).

2.4. The reality of lending to personal customers of Military Commercial Joint Stock Bank

Loan turnover is the total amount of money that the bank has disbursed to customers for a certain period of time, which can be quarterly, monthly or yearly (in this thesis, loan sales are calculated by year). . If the amount of money mobilized by the bank is high and the loan turnover is high, it shows that the bank has used the mobilized money effectively, with the aim of bringing profit to the bank.

But high loan sales does not mean good lending performance, but it also depends on debt collection in the period. Sales of science and technology loans of MBBank in the period from 2010 to 2012 are presented in the following table: 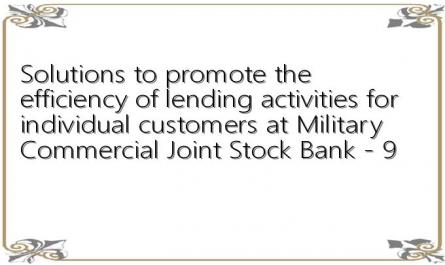 From Table 2.6, we can see that lending activities for science and technology tend to decrease in proportion in loan sales but still increase in quantity. This is one of MBBank's efforts when designing many new products and services, expanding operating areas and developing credit products.

In 2012, loan sales for science and technology reached VND 20,072 billion, accounting for 14.23% of total loan sales, continuing to increase compared to 2011 at VND 4,503 billion, equivalent to an increase of 28.92 . According to Table 2.3, the main borrowers of banks are financial institutions because they have better repayment capacity than science and technology, have collateral as collateral and the lending process is simpler.

The science and technology lending market is a market that banks are not allowed to leave when currently banks such as Techcombank, ACB, MSB, etc. are aiming to become a selling bank. Meanwhile, MBBank is moving away from that goal. Therefore, MBBank needs to have better measures to maintain its relationships with science and technology.

The low total loan balance shows that the bank's operations are still weak, inability to expand, the bank's marketing ability is poor, and the qualifications of its staff are low.

However, it does not mean that the higher this ratio, the higher the lending efficiency because behind those loans there are credit risks that banks encounter. The indicator of total outstanding loans reflects the bank's lending scale and the bank's reputation for science and technology.

The outstanding loans for science and technology loans of Military Commercial Joint Stock Bank in 3 years 2010, 2011 and 2012 are shown in the table below:

In terms of scale of science and technology loans

MBBank's total outstanding loans to science and technology increased in both quantity and proportion:

By 2012, short-term loans to science and technology were VND 6,447 billion, equivalent to 69.59% of total loans to science and technology. The period 2010 - 2012 were difficult years for the economy. Although banks have issued many credit cards, the real demand for loans of the people is not much. Moreover, because the economy is difficult, income is also more difficult, so all consumption needs decrease.

Therefore, the demand for short-term loans increases, and medium and long-term loans decrease. Medium-term loans are mainly from S&Ts to buy equipment and build factories for production. The balance of medium-term loans to science and technology increased in absolute terms, but the proportion gradually decreased over the years: in 2010 reached 2,158 billion VND (equivalent to 29.49), in 2011 reached 2,296 billion VND (equivalent to 28.44 USD). ) and in 2012 was 2,401 billion VND (equivalent to 25.92 total outstanding loans to science and technology). Long-term loans accounted for the smallest proportion of total outstanding loans to science and technology: 2.66 (in 2010), 2.65 (in 2011) and 4.49 (in 2012). Long-term borrowers mainly serve the purpose of buying cars, buying houses, studying abroad, or exporting labor. Currently, when society develops, families want their children to study in developed countries, so the demand for study abroad loans increases.That is the reason for the increase in the long-term loan balance.

Structure by type of loan:

Structure according to special assets:

In 2012, along with the increase in loan sales, the bank also accelerated debt collection.

From there, it can be seen that the revenue of science and technology debt increased in both quantity and proportion.

This is a commendable achievement of MBBank. Part of the reason is that customers' production and business activities were strongly affected by the economic crisis, unable to repay bank loans, so they applied for debt restructuring.

At the same time, debt restructuring is a way for banks to help their customers overcome difficulties and generate revenue to repay loans. In addition, because the customers keep their reputation, they are responsible for the loan. The increase in debt collection over the years shows that MBBank has effectively applied debt collection policies for science and technology such as closely monitoring risky debts, focusing on settling overdue debts, use foreclosure measures against customers who are no longer able to repay their debts.