In the past three years, MBBank has not only enhanced lending activities, but also paid great attention to the task of debt recovery. The evidence is that the situation of debt collection for loans in general and loans for science and technology in particular has made clear and positive changes. This can be a proof of the effectiveness of science and technology lending activities at Military Commercial Joint Stock Bank.

MBBank has complied with the regulations of the State and the State Bank. Moreover, the bank also promulgates its own documents and regulations suitable to each stage and period of economic development to ensure that the bank's business activities are on the right track, especially lending activity - the main activity of the bank is effective. Thereby contributing to the overall development of the economy. The profitable business bank shows the correctness and accuracy of the legal basis.

In general, banks or credit officers in particular have strictly implemented the bank's credit process, ensuring the necessary safety principles. However, there are still some credit officers who do not comply with professional principles causing risks to the bank. The appraisal is being focused by MBBank because this is the most important step to consider whether to lend to customers or not, but it still needs to be improved. The bank's loan application appraisal process follows the following principles: Fast, transparent, accurate and efficient. However, the lending process has not yet fully met the needs of customers. Borrowing time and procedures are cumbersome, not fully and quickly providing capital to customers. Therefore, borrowers sometimes do not save on transaction costs.does not save time, so there are still some complaints about the bank from customers.

Military Commercial Joint Stock Bank has long been known for its image as a leading bank, relatively large in terms of capital, assets, staff, network of operations and number of customers. As a modern, versatile bank, providing a wide range of safe and effective financial products and services with professional, healthy, safe and friendly service quality. MBBank has diversified the loan structure for science and technology with short-term, medium-long-term loans combined with diversification of customers. Customers come to the bank operating in many fields such as industry, agriculture, commerce or services.

In addition to lending in local currency, the bank also supports customers to borrow capital in foreign currencies. It is the diversity of lending sources that has created the basis for avoiding risks, contributing to promoting the development of a colorful economy. Since then, attracting more customers, the reputation of the bank is increasingly enhanced. Therefore, maintaining customer loyalty and the number of customers is especially important in increasing the number of customers and expanding the bank's business.

Overdue debt is an indicator that the bank's credit relationship is not perfect when borrowers do not fulfill their debt repayment obligations to the bank on time. An increase in overdue debt will cause additional costs of debt collection, handling costs of special assets, expenses for setting aside risk provisions, etc., causing losses to the bank. Bad debts belong to debt groups 3,4,5.

This indicator evaluates the actual risks occurring in the structure of overdue debt.

Table 2.8 below shows the specific situation of overdue debt and bad debt in total outstanding loans for science and technology of Military Commercial Joint Stock Bank in the period 2010 - 2012.

Table 2.9. Situation of overdue debt and bad debt on total outstanding loans for individual customers in the period 2010 - 2012 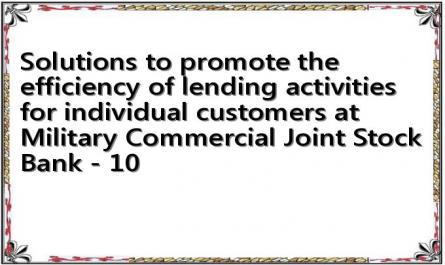 The reason is that since 2011, the housing and real estate market froze, some customers borrowed capital for investment and this market made a loss, leading to the inability to repay the bank's debt. Moreover, rising inflation makes it difficult for borrowers when their manufactured goods cannot be sold. .

Some consumer borrowers are also unable to repay their loans because businesses cut payrolls. There are also a number of reasons from the bank's side such as the bank is still quite subjective in collecting information related to customers, is too trusting in its long-term customers, the loan monitoring is still very difficult. loose.

Therefore, in 2011 overdue debt increased by 190 billion dong compared to 2010, equivalent to an increase of 93.14 . Until 2012, the economy continued to be difficult, making customers unable to repay the bank's debt. Although the bank has paid more attention to the supervision of customers' loans to reduce the rate of overdue debt, but due to the rapid increase of outstanding loans for science and technology (in 2011 outstanding loans for science and technology increased by 10.32% compared to the previous year). In 2010, 2012 increased by 14.75 compared to 2011), so the rate of overdue debt is still high.

Bad debt of science and technology is also low with absolute amounts of 62 billion dong (2010), 85 billion dong (2011) and 131 billion dong (2012). Bad debt ratio for science and technology also accounts for a low proportion, 0.85 in 2010, 1.05 in 2011 and 1.41% in 2012. The frozen real estate market caused investment customers to struggle, although they used all means to sell plots of land and apartments, but as a result, they still could not pay their debts to the bank. Vietnam's economy in 2011 and 2012 faced a global crisis, rising inflation caused business activities of customers to decrease. The job market is very competitive, requires a high level of expertise, and customers who have lost their jobs find it difficult to find new jobs. Those are the reasons for the increase in bad debt.

Although, the bank has put in place some measures in monitoring and recovering debts, restructuring debts to ensure that the bad debt ratio is still kept at a level lower than 2 .

However, the bank cannot subjectively neglect bad debt management, especially when overdue debt exceeds 5%. That is an alarming sign of the risk of a mishap.

Overdue debt above 5% makes credit activities in the bank unhealthy, high risk, causing congestion and capital stagnation. Currently, the possibility of credit risk is low compared to other banks in the system, but there is still a high possibility of credit risk, if the bank itself does not have good credit risk restriction measures, this requires the bank itself In any event, appropriate risk-reducing precautions must be taken.

The ratio of bad debt to overdue debt in 3 years was 30.39 (in 2010), 21.57 (in 2011) and 25.64 (in 2012). In 2011, the bank restructured a number of customers' debts, so bad debts decreased. Besides, the rate of overdue debt increased in 2011 was higher than that of 2010 (increasing by 93.14 ), so the ratio of bad debt to overdue debt in 2011 decreased compared to 2010. By 2012, the bad debt ratio overdue debt increased again because the growth rate of bad debt compared to 2011 (54.1 ) was faster than the growth rate of overdue debt (29.70%). If the bad debt ratio accounts for the majority of overdue debts, it will affect the business activities of the bank. Although debt restructuring can reduce bad debts, banks cannot rely too much on this measure. Restructuring debts too many times will make customers subjective and irresponsible for loans,which can lead to loss of capital.

The ratio of provisioning for credit risk for science and technology loans shows how much credit risk provision in science and technology loans is made compared to the total outstanding loans for science and technology. In 2010, despite the difficult economy, due to fluctuations, reasonable credit policies and measures, and improved credit standards, MBBank began to focus on ensuring credit safety. use. Moreover, MBBank always adheres to the principle of prudence and the goal of ensuring a healthy and under control credit portfolio, in addition to always maintaining the bad debt ratio below 2% of the total outstanding loans, the bank also determines In the worst case scenario, there will still be a reserve to handle when the risk occurs.

Ability to offset the risk of lending to science and technology

Debts that have been dealt with risks for science and technology are bad debts of the bank, which are offset by the bank's DPRR for HCN loans, which are deducted and monitored in the off-balance sheet account.

Table 2.9 shows that the highest compensability coefficient in 2011 is 4.35 times. That is, 1 VND loan is lost, there is 4.35 VND in reserve to compensate. This ratio is high because the balance of loans handled at risk in 2011 decreased by 18.42% compared to 2010, while the DPRR for science and technology loans in 2011 increased by 20.54 compared to 2010. Therefore, the compensation coefficient in 2011 increased to the highest level in 3 years. In 2012, this coefficient was 3.82 times, a decrease compared to 2011 but still high compared to 2010 of 2.95 times. To achieve this reduction, the bank attempted to increase the outstanding outstanding balance. In addition, this year, the bad debt of science and technology increased significantly, causing the bank's debt to deal with risks to increase rapidly: in 2012, it reached VND 40 billion, an increase of VND 9 billion, equivalent to 29.03% compared to 2010. However, the system this number has not decreased much, so the bank should pay attention because it directly reflects the safety,capital stability as well as the bank's lending efficiency.