In addition, they also consider: (1) the rate of turnover in the domestic market, (2) the companies that are members of a business association or chamber of commerce, (3) the company's habitual frequent use of the Internet in dealing with customers and suppliers, (4) education level of the workforce. These variables may provide useful information for firms with unobserved structural characteristics, related to management quality. 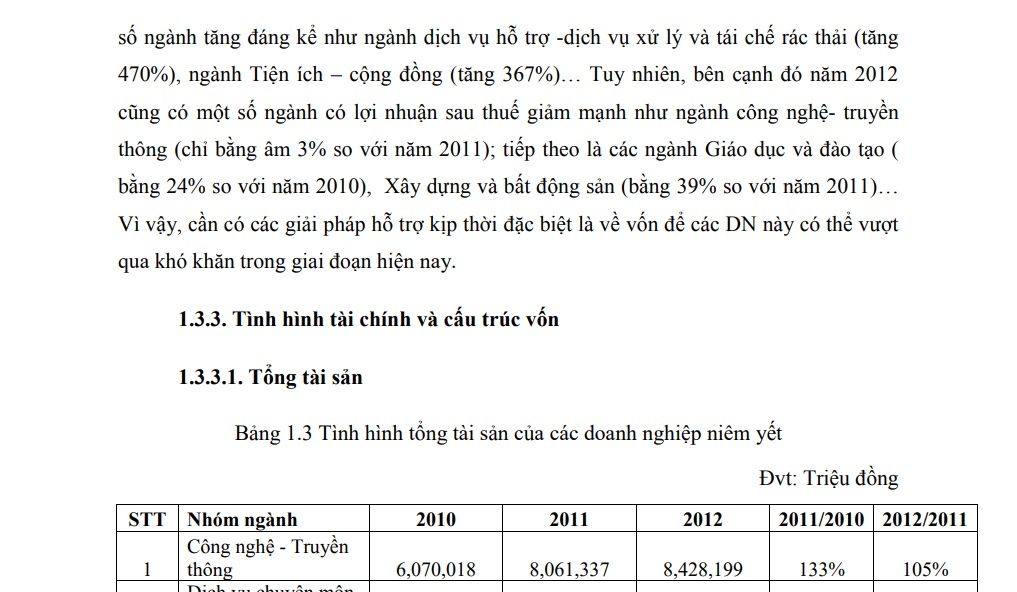 The author uses probit model to study, the test results show that the higher the ability to access bank credit for: (1) companies with growth in revenue; (2) profitable company  ; (3) large-scale companies; (4) the company has a relationship with the bank. Factors that do not affect credit access include age of the company, use of independent auditors, use of international auditing standards, medium-sized companies, and gender of female owners.

In 2009, Vietnam's stock market grew strongly thanks to the government's economic stimulus policies, especially the policy of interest rate support, exemption, reduction and deferral of income tax. The high credit growth rate in 2009 contributed to growth on the one hand, but also helped the stock market rebound strongly. In addition, the decrease in inflation this year also creates more confidence about macroeconomic stability.

In 2010, due to the pressure of inflation and high interest rates, the trade deficit was high, while credit growth and money supply decreased compared to 2009, so the VNIndex decreased by 2.04%. However, Vietnam's stock market continued to achieve very positive results in important aspects: market capitalization reached 39% of GDP, an increase of 17.1% compared to 2009; actual capital mobilization reached 98.7 trillion dong, 3 times higher than 2009; average trading value per session reached 2,480 billion dong; net foreign capital inflows over 1 billion USD; the number of investor accounts increased by 38%…(State Securities Commission, 2012).

Market size compared to GDP narrowed when the market capitalization as of December 31, 2011 decreased significantly, reaching only VND 539,000 billion, down VND 187,000 billion (26%) compared to VND 726,000 billion at the end of the year. 2010. Vietnam's stock market was one of the world's biggest decliners in 2011. Vietnam's stock market is affected by and reflects macroeconomic difficulties and uncertainties such as high inflation, The banking system faced liquidity difficulties, most businesses failed to achieve the set revenue and profit targets. The downtrend clearly dominated with HNX-Index down 48.6%, VN Index down 27.5%. 62% of stocks on both exchanges have market prices below par value. Market liquidity dropped sharply with the total trading value of both exchanges in many sessions below 1,000 billion dong.The average trading value and volume per session for both HNX and HOSE (by order matching method) in 2011 was VND 790.72 billion and 53.25 million shares, down 65% and 30% compared to the previous year. (State Securities Commission, 2012).

Looking back at 2012, Vietnam's stock market is still quite unstable due to both objective and subjective reasons. Although there were economic bright spots recorded in 2012 such as relatively low inflation, stable exchange rate, falling interest rates, strong export growth and trade balance surplus, the trend of capital divestment of large corporations has not been confirmed. unions and corporations, plus the restructuring of not only credit institutions but also SOEs, makes it difficult for the market to see significant improvements in the medium term.

Through the survey of audited financial statements of 648 enterprises listed on the Vietnam stock market from 2010 to 2012, the business situation of listed companies is as follows:

The above table shows that, in 2011 the revenue of listed companies had a significant growth (up 54% compared to 2010). However, in 2012, the business situation started to be difficult, revenue only increased by 21% compared to 2011. In which, the Technology - Communication and Agriculture - Forestry - Fisheries industry saw the biggest decrease in revenue. (17%), followed by Trade (wholesale and retail (down 9%), Construction and real estate (down 8%)… Particularly, the Community Utilities industry saw a significant revenue growth (down by 8%). 313%), Education and training (52%), mining, accommodation and catering services also saw significant revenue growth.

Table 1.2 Situation of profit after tax of listed companies