6. From an analytic perspective, we identify the cultural content associated with the ethnic characteristics of the language. The formation of the coding line of CTLC is associated with the dynamism of cognitive-oriented thinking in a specific environment, inseparable from the elements from the address, cultural characteristic schema, etc. In the process of creating meaning, the The above factors are indispensable materials, influencing each other to raise the semantic function to the pragmatic function, and at the same time put the process of language communication into the openness of cultural vision.

7. The thesis has contributed to highlighting the picture of stylistic characteristics and style standards closely related to habitability, stereotypes, accuracy, experience, compliance, creativity, At the same time, it evokes the difference in nuances implicit in the act of asking of the buying and selling environment in real daily life (the creation of pragmatics with different presuppositional levels, according to the the interaction between the principle of politeness, separate cooperation, together with the breaking of the maxim of conversation in terms of quality and quantity is also very different according to a language standard selected to achieve specific communication purposes) , with implicit nuances belonging to literary and artistic texts (products of the rhetorical process in the direction of aesthetics, manipulating figurative thinking).

8. Thus, CTLC is the basis of the governing principles of language activities in commercial communication , and suggests pragmatic research on: strategic choice theory; choice for norm; choice for polite strategy.

9. We need to have a more objective and comprehensive view of the art of communication and purchase in our country, avoiding the one-sided view that the trading language belongs to low, monotonous, non-standard style compared to literary language. common standardization. At the same time, cultivating the ability to use personal and business languages ​​well in macro-economic situations and negotiations brings great and practical benefits to the Vietnamese economy.

10. We also hope that the Ministry of Education and Training will include the issue of standard language for buying and selling communication into the educational curricula at the high school and university levels 11. Some suggested issues for further study , clarifying the intersection theory of interdisciplinary nature. That is to build and supplement the vocabulary of buying and selling words in order to interpret, compare, and provide some necessary knowledge for the Vietnamese dictionary system. The next step is to establish a semantic field system, practice the building of a set of words with semantic relations according to the topic of purchase and sale. At the same time, it is possible to add a class of Vietnamese buying and selling vocabulary in terms of origin, scope of use, time of use… From there, we can build theory and practice about commercial VIETNAM,to be able to push Vietnamese in the field of commercial communication to international standards and become “Vietnamese commercial terms” VIETNAMESE REFERENCES 1. Dao Duy Anh (1932), Sino-Vietnamese dictionary, Hanoi .

3. Do Anh (1990), Try to apply the functional structure perspective to identify and describe the Vietnamese language bridge sentence, NN, No.

4. Hoang Anh (1998), Some methods to enhance expressiveness in journalism, culture and life, no.7.

39. Do Huu Chau (2003), The basis of pragmatics, volume 1, Publishing House of the University of Pedagogy, Hanoi.

41. Hoang Thi Chau (1995), Some Suggestions on Standardizing Addressing in Social, Language and Life, No. 3.

61. Le Dong (1991), Semantics and pragmatics of Vietnamese lexical verbs: the evaluation meaning of lexicons, NN, No.2.

62. Le Dong (1994), The role of presuppositional information in the pragmatic semantic structure of the question, NN, no.2.

63. Le Dong, Pham Hung Viet (1995), Emphasis as a pragmatic phenomenon and pragmatic semantic characteristics of some stressed particles in Vietnamese, NN, no.2. 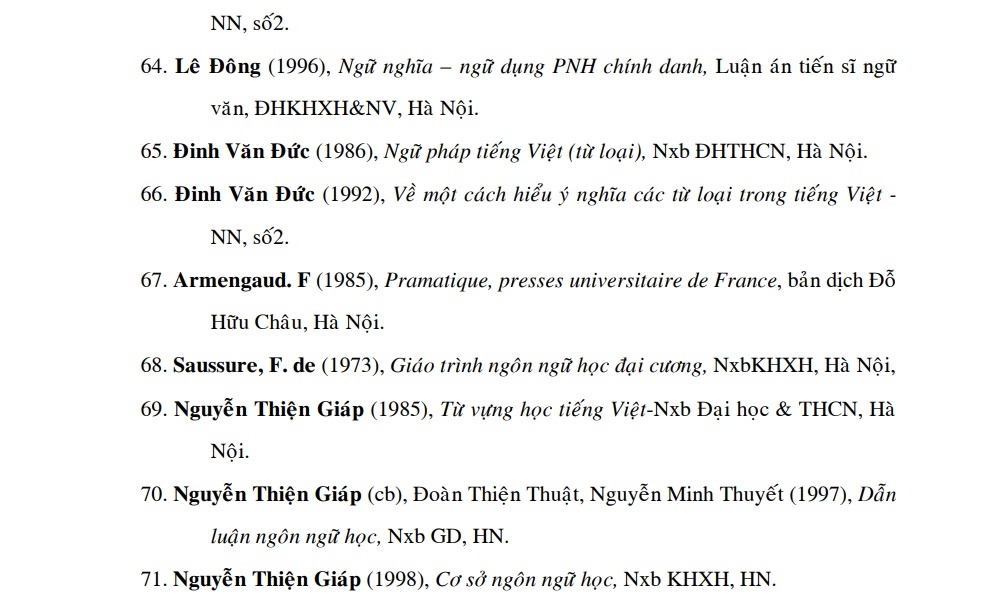 92. Nguyen Thi Li Kha (2001), The meaning indicates the relationship of nouns of kinship in Vietnamese – Proceedings of Young Linguistics.

117. Duong Thi Nu (1999), Some comments on the characteristics of the words “father” and “mother” on the basis of comparison between Vietnamese and English, Proceedings of Young Linguistics.

133. Mai Thi Kieu Phuong (2002), Some comments on pronunciation of Nha Trang dialect Khanh Hoa – Proceedings of linguistics seminar “Language on the way of industrialization and modernization of the country” HCMC .

134. Mai Thi Kieu Phuong (2002), Some comments on the structure of bilingual language between buyers and sellers, Proceedings of the linguistics seminar “NN on the way of industrialization and modernization of the country” HCMC.

139. Mai Thi Kieu Phuong (2005), Implicit meaning and mechanism for creating the allegorical meaning of the act of asking in buying and selling conversations in Vietnamese, NN, no.2.

142. Mai Thi Kieu Phuong (2006), National cultural characteristics in the implicit meaning of question statements when communicating in Vietnamese, NN, no.9.

149. Trinh Sam (1986), On a phenomenon of slang words in Southern dialect, in “Some problems of NNH about Eastern languages” – National Institute of Agriculture, Hanoi.

156. Le Xuan Thai (1984), On the problem of realizing the combinatorial presupposition of verbs and adjectives, NN, no. 3.

165. Tran Ngoc Them (1984), Discussing Vietnamese morphemes from the perspective of general linguistics, NN, No. 1.

184. Hoang Tue (1991), Manifestation with implication, an interesting issue in the current 10th grade program of high school, NN, no. 3.

198. Bui Thi Minh Yen (2001), From the address in the family to the social address of the Vietnamese-PhD thesis.

201. RE Asher Editor in chief (1994), The Encyclopedia of Language and Linguistics, Pergamon Press.

2. (2002), Some comments on pronunciation of Nha Trang dialect Khanh Hoa Proceedings of NNH seminar “NN on the way of industrialization and modernization of the country” HCMC.

3. (2002), Some comments on the structure of bilingual agriculture between buyers and sellers, Proceedings of the National Bank’s workshop “The State on the road to industrialization and modernization of the country” HCMC.

10. (2005), Implicit meaning and mechanism for generating allegorical meanings of the act of asking in a buying and selling conversation in Vietnamese, Language, no.2.

13. (2006), National cultural characteristics in the implicit meaning of interrogative statements in Vietnamese language, Language, No. 9.