However, the use of quality and distance models as a basis for assessing service quality is also controversial (Carmen 1990, Cronin & Taylor 1992). From the experimental research results, Cronin & Taylor (1992) with the SERVPERF scale, said that the perceived level of customers towards the service performance of the enterprise best reflects the service quality. According to the SERVPERF scale:

From the experimental research results, Cronin and Taylor (1992) concluded that the SERVPERF scale performed better than any other service quality measurement tool. The superiority of the SERVPERF scale compared to the SERVQUAL scale has been demonstrated in many studies by authors such as McAlexander et al., 1994; Hahm et al., 1997; Avkiran (‘BANKSERV’), 1999 and most recently Lee et al., 2000; Brady et al., 2002.

The SERVPERF scale also uses the same statements as the questions and feelings of customers in the SEVQUAL model, omitting the question about expectations. 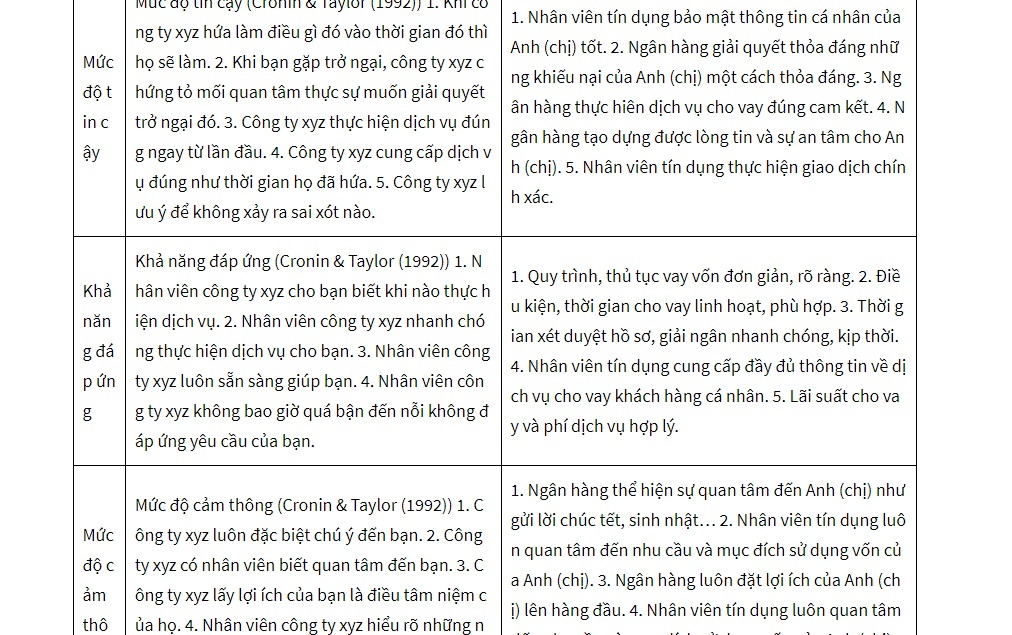 The SERVPERF scale was introduced by the authors Cronin & Taylor (1992) based on overcoming the difficulties when using the SERVQUAL scale with 5 service quality components:

Since it comes from the SERVQUAL scale, the components and observed variables of this SERVPERF scale are kept as SERVQUAL. This measurement model is called the perceptual model.

Figure 1.3: Research model of the topic

The research hypothesis is stated as follows:

– Hypothesis H1: Tangibles factor has a positive influence on the quality of lending services for individual customers.

– Hypothesis H4: The service capacity factor has a positive effect on the quality of lending services for individual customers.

– Hypothesis H5: Factor Level of sympathy has a positive influence on service quality of personal loans.

In 2006, with the approval of the State Bank of Vietnam, the Bank transformed its operating model from Rural Commercial Joint Stock Bank to Urban Commercial Joint Stock Bank operating in the financial-monetary sector, from then on. The Bank’s activities had a breakthrough, reflected in the rapid and stable growth in terms of total assets, network and operating area, charter capital and business performance. In 2006, Navibank’s charter capital was 3,000 billion VND.

However, Nam Viet Bank had major problems in risk management, the management and administration system was not synchronized, and the allocation of resources was inefficient. Therefore, when the Vietnamese economy was in crisis, Nam Viet Bank fell into a difficult situation and only restructuring could help the Bank to really change and develop. Faced with that situation, Nam Viet Commercial Joint Stock Bank proposed to the State Bank to allow self-restructuring based on available resources. In early 2014, the beginning of a new development phase. Nam Viet was changed to a new shirt with the name of National Citizen Commercial Joint Stock Bank (NCB). Over 20 years of operation, National People’s Commercial Joint Stock Bank has affirmed its position in the financial-currency market.

In the new period of operation, NCB Hue Branch encountered many difficulties and challenges: as the Bank opened a branch in Hue later than some other joint-stock commercial banks, it was not known by many Hue people. In addition, the fear of reputation and trust in a new bank is also a difficulty that the branch needs to face, finding the market is also under competitive pressure from other banks. . However, with its efforts and customer policies, NCP-Hue Bank has removed the initial difficulties, gradually created a good image and consolidated trust and prestige in the hearts of people. people.

With a team of young, dynamic, professional financial resources, interested in more subjects of science and technology, dedicated to serving customers, businesses have brought to customers financial solutions with good costs. 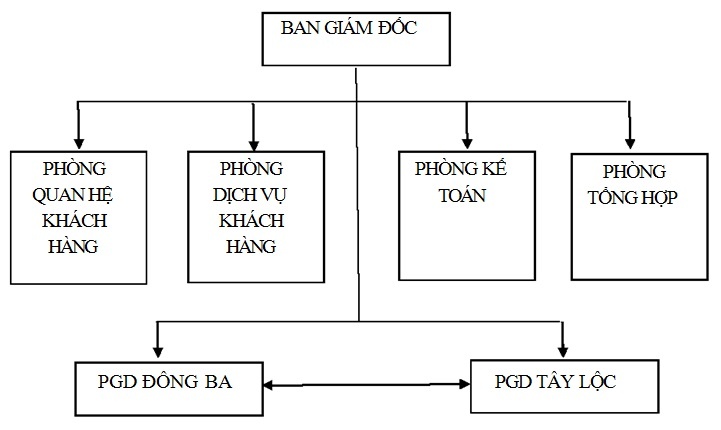 Functions and duties of departments:

– The Board of Directors: is the highest leadership department and has the right to decide on all matters in the Bank, to take control and take all responsibility for the Bank’s operations in accordance with the Bank’s plans and targets.

– Customer Relations Department: has the function and task of researching and building credit customer strategies, appraising and proposing loans to borrowers, regularly monitoring, checking and controlling the use of credit. loans, recover loans, analyze business activities of the borrowers, select the safest and most effective lending measures.

– Accounting Department: directly accounting operations, accounting reports of branches, treasury, performing revenue and expenditure operations according to the decision of the leader or authorized person.

– Customer service department: disbursing loans and providing loans to customers based on approved documents, and at the same time opening deposit accounts for customers. Perform transactions such as deposit, withdrawal, payment, foreign currency transaction… and be responsible for handling customer needs.

– Transaction offices: operate like fast payment but with small scale, under the management and administration of the branch.

– Additional loans for working capital for production and business.

– Loans to purchase machinery and equipment, invest in factories.

– Loans to supplement working capital with medium and long-term installments.

– Financing the production and processing of export goods.

– Loans to invest in cars with transport businesses.