Labor in the tourism industry

There is a shortage of labor in the tourism industry in Vinh Phuc province. In 2013, there were 16,600 employees, an increase of 64.26% compared to 2009 but the average rate of employees per hotel room in the province was only 0.55. low compared to neighboring provinces and the whole country. The quality of labor in the tourism industry is still weak and limited in terms of professional qualifications.

In 2009, total income from tourism reached 713 billion VND, in 2013 increased to 870 billion VND. However, the spending level of tourists to Vinh Phuc is still low. On average, international visitors spend about 50 USD/day/person. Domestic tourists spend at a lower rate, about 30 USD/day/person.

Since 2001 until now, Vinh Phuc tourism industry has had 17 investment projects in the tourism sector with a total capital of 6,346.3 billion VND, of which: Tam Dao tourist area 6 projects, Phuc Yen 5 projects , Vinh Yen 4 projects, other areas 2 projects.

- Intra-provincial tourism routes are built on the basis of connecting tourist areas and attractions in the private space of Vinh Phuc province, through national highways 2, 2B, 2C, North - South railway and other routes. Provincial Highway.

- The inter-provincial tourist routes are linked mainly in the space of the northern mountainous provinces. In addition, Vinh Phuc has the potential to develop an inter-provincial waterway tourist route through the Lo River - the Red River, but in the past time, this route has not really been developed.

reached a revenue of 1,768.85 billion VND, equivalent to 70% of the total number of visitors and 55.27% of the total revenue of the province. In which, the proportion of international visitors is very low, accounting for 1.48% of the tourist structure of the whole province. Domestic tourists account for the majority of visitors (98.52%), and often gather the most during festivals at the Tay Thien scenic area.

Linking with neighboring provinces In the space of tourism linkages between Vinh Phuc, Thai Nguyen, Tuyen Quang and Phu Tho, because there are no inter-regional tourism products, the spread of tourists from other provinces to Vinh Phuc is not high. Therefore, development links have become one of the key orientations of Vinh Phuc tourism.

The thesis applies a system of zoning criteria on topography and geomorphology of Nguyen Dinh Ky and Lai Vinh Cam (2011), criteria on climate zoning by Tran Viet Lien, Ngo Tien Giang (2011), and other criteria on climate zoning. Indicators of vegetation zoning by Vu Tan Phuong et al (2013) in natural geographical zoning in the study territory. The zoning hierarchy is divided into two levels: regions and subregions. Based on identified zoning criteria and criteria, the entire territory of Vinh Phuc province is divided into 4 regions and 7 natural geographical sub-regions.

Board. The system of natural geographical zoning of Vinh Phuc province 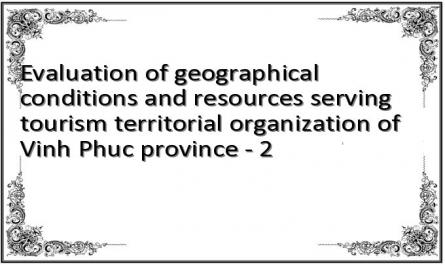 General assessment of the favorable level of tourism resources

The objective of the assessment of geographical conditions and resources is to determine according to the levels of “very favorable”, “fairly favorable”, “favorable” and “unfavorable” of resources for tourism development purposes. in the study territory. Specifically: (1) General assessment to determine the favorable level of natural resources for tourism activities in general according to 7 natural geographical sub-regions of Vinh Phuc province; (2) Evaluation of each type of resource to determine the favorable level of the resource for some typical types of tourism.

Based on the assessment results, the thesis will propose appropriate orientations and solutions for the organization of tourism territory of Vinh Phuc province.

The evaluation formula has the form:

Applying the triangular matrix method of NCHuan (2005) to calculate the weights:

where: kj is the weight of the jth indicator; rj is the number of repetitions of the jth criterion.

The distance of each ranking level is calculated according to the formula (NCHuan, 2005):

Establishing a system of evaluation criteria

(2) The system of criteria for assessing conditions for exploiting tourism resources is divided into: groups of auxiliary technical and physical facilities and groups of criteria on the attractiveness of resources.

Build a rating scale and determine the weights

Determine the weight according to each evaluation criterion

The results of ranking the convenience of tourism resources

The results of assessment and classification of the convenience of sub-regions for eco-tourism are as follows:

+ Sub-region of the hills of Binh Xuyen - Tam Duong province

The results of evaluation and classification of the convenience of sub-regions for cultural tourism are as follows:

The master plan for tourism development of Vinh Phuc province to 2020 with a vision to 2030 has organized Vinh Phuc tourism space according to 5 tourist clusters.

- Diversity of tourism resources are favorable conditions for Vinh Phuc to develop specific tourism products that do not overlap with many other localities in the region.

- Resources and favorable position help Vinh Phuc have the opportunity to promote economic, social development and especially tourism in relation to the capital Hanoi and the northern provinces and cities.

- The image of tourist destinations of Tam Dao tourist areas and Tay Thien scenic relic area has created strengths with its own nuances of Vinh Phuc tourism.

- The quality of labor in the tourism industry is still limited in both quantity and management and professional qualifications, not meeting the development requirements in the current trend of tourism integration in Vietnam.

- Seasonality in tourism is one of the important reasons affecting the average number of days of stay and the very low capital expenditure of tourists when coming to Vinh Phuc.

- The ability to link and develop tourism is not high, leading to the limitation of visitor flows to Vinh Phuc, as well as not creating a general tourism image of the whole region, in which Vinh Phuc has not yet been created.

Phuc is an important destination.

- The waterway route has not been put into operation for tourism activities, which also leads to limitations in the exploitation and association of tourism resources, especially forms of humanistic tourism resources associated with tourism. wet rice civilization of the Red River Delta.

- Marketing strategy to position Vietnam as a unique, attractive and safe destination built by the Government to create opportunities for Vinh Phuc tourism to assert its image in the domestic and international tourism market.

- Tourism competitiveness is still low, affecting the position of Vinh Phuc tourism in the local socio-economic development strategy, as well as in the development strategy of the Northern tourism region in particular and of the whole country. water in general.

- Unsustainable use and exploitation of tourism resources leads to the degradation of historical and cultural relics, the decline of biodiversity in natural areas, especially in Tam Dao National Park.

Orientation for tourism development in sub-regions

(1) Northern low-mountain sub-region of Lo River - Lap Thach: is an area for future expansion and development.

These tourist routes combine the exploitation and use of physical, technical facilities and tourism resources of localities on the whole route.

Solutions to improve the effectiveness of State management of tourism

1. The thesis has reviewed the research works and the theoretical basis related to the research content. Create a basis for applying research points of modern geography to approach zoning and assess the convenience of resources for tourism territorial organization, applied to the province. Vinh Phuc.

2. Vinh Phuc province has quite rich and diverse tourism resources. Natural tourism resources are formed thanks to geographical conditions affected by non-tropical laws in nature, creating a diversity of terrain, climate, vegetation, and soil. In addition, there is a system of humanistic tourism resources formed throughout history with 967 sites

There are 228 provincial-level relics, 60 national-level relics, along with many craft villages, festivals and archaeological sites of high value for tourism development.

3. The economic growth rate of Vinh Phuc province in the period 2009 - 2013 has been maintained stably. From an agricultural province, Vinh Phuc has rapidly transformed its economic structure towards industrialization and modernization to become a province with a high industrial-construction structure in the whole country. The proportion of industry - construction accounts for the majority of GDP of the province (57.3%), the proportion of the service industry tends to decrease (26.2%), followed by the proportion of agriculture, forestry and fishery (13, 6%). The service sector and tourism account for a very small proportion (2.9%).

4. Current status of tourism activities of Vinh Phuc province in recent years has not developed commensurate with its potential: low number of tourists, especially international visitors; Infrastructure - material and technical has not been developed strongly, unevenly distributed; Lack of human resources and low training rate; The ability to link tourism has not been expanded with neighboring provinces, in the space of the provinces of the Northern key economic region and the Northern tourism region; Effective tourism business is only concentrated in a few places such as Tam Dao, Tay Thien, Dai Lai, Dam Vac, leading to modest tourism economic efficiency, limited in investment and in the ability to meet demand. of visitors.

5. On the basis of dividing the territory into relatively homogenous units in terms of composition, nature and relationship between the forming factors, the entire territory of Vinh Phuc province is divided into 4 regions with 7 sub-regions . Identifying natural characteristics and tourism resources of each sub-region creates a scientific basis for the assessment and classification of favorable levels of geographical conditions and tourism resources by sub-regions and by type. tourism.

6. The results of synthetic assessment of the convenience of resources by the multi-criteria analysis method integrating the summing algorithm with the triangular matrix weighting model have determined the favorable level of the resource. tourism resources by sub-regions with levels of “very favorable”, “fairly favorable”, “favorable” and “unfavorable”. At the same time, it is possible to determine the degree of convenience of the sub-regions for two key types of tourism in Vinh Phuc province, namely eco-tourism and cultural tourism.