SUMMARY OF MASTER'S THESIS OF SOCIAL SCIENCE AND HUMANITIES 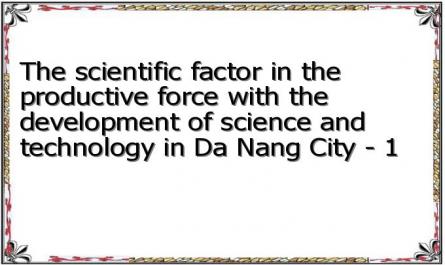 The thesis was defended in front of the Graduation Thesis Graduation Committee of Social Sciences and Humanities at the University of Danang on January 31, 2015.

- Center for information and learning materials, University of Danang

In the development of mankind, we have been witnessing many great changes in the entire social life, from economic, political, social changes to scientific awareness.

That is why science has been making an increasingly strong impact on all aspects of human life, with the most important result being a turning point in the qualitative development of the productive forces. Science is the first cause of change, promoting development in all aspects of humanity. That proved Marx's predictions: Science - technology will become a direct productive force - which C. Marx has said since the middle years of the nineteenth century.

Seen from all aspects or different levels, science - technology has had a positive influence on the overall development of all countries in the world, including Vietnam. Especially in the current period - when our country is in the period of accelerating industrialization and modernization of the country. Science and technology have been invested by the Party and State in the most important way, which is an important factor to ensure the victory of the cause of socialist-oriented national construction.

In the documents of the Communist Party of Vietnam Congress, especially in the 7th National Congress of Deputies up to now, the issue of education - training; Science - technology is the top national policy emphasized by our Party and introduced a policy of raising people's knowledge in order to absorb advanced science and technology, step by step entering the integration of international civilization. Especially in the recent document of the 11th National Party Congress, the issue of science and technology was specifically mentioned by the Party and State in every detail.

Da Nang is one of the big cities of the country, is the economic, cultural, educational, scientific ... center of the central provinces and the Central Highlands. In recent years, Da Nang has achieved many important achievements in all areas of social life. However, besides these commendable achievements, the problem of developing and applying science and technology to industrial development in particular and socio-economic development in general in Da Nang still faces many difficulties.

- Objective: From the analysis of the role of scientific factors in the productive forces, the thesis gives some orientations and develops solutions to develop science - technology in Da Nang city today. .

+ Systematize basic theoretical issues about the role of scientific factors in productive forces.

+ Analyze the potential, current situation and trends of science - technology development in Da Nang, assess the achievements, limitations and clarify the causes.

- The object of the thesis is the development of science and technology in Da Nang city, from a philosophical perspective.

+ Theories about the scientific element and the philosophy of the quantity of production.

+ Factors in the relationship with the development of science - technology in Da Nang city.

- Research scope of the thesis: Focusing on research on the role of scientific factors in productive forces with the development of science - technology in the current Da Nang city.

- Theoretical basis: The thesis is made on the basis of the theory of Marxism - Leninism on productive forces. The policy of the Communist Party of Vietnam on the development of science - technology and economic theories related to the topic.

* Scientific and practical significance of the thesis

- Is the scientific basis for the undertakings, policies, plannings, plans and development programs of the city.

- The thesis can serve as a reference for those who are interested in the development of science - technology of Da Nang.

SCIENCE AND THE ROLE OF SCIENCE IN THE FORCE OF PRODUCTION

1.1.1. Concepts of science and technology

The term science appeared very early, it is a process to research and discover new knowledge, new theories... about nature and society. Throughout history there have been many different conceptions of science.

Science is a system of knowledge about the laws of matter and the movement of matter, the laws of nature, society and thought. This knowledge system is formed in history and is constantly developing on the basis of social reality.

Depending on the research purpose and approach of each discipline or subject, the concept of science is also studied from different angles.

Technology (derived from technologia, or τεχνολογια, in Greek; techne meaning craft and logia meaning "adjective") is a broad term that refers to human tools and tricks. . Depending on the context, the term technology can be understood: Tools or machines that help people solve problems; techniques include methods, materials, tools and processes for solving a problem; the products created must be mass and similar; Products with high quality and low price.

There are many different concepts about the term technology, but it can be understood: Technology is the synthesis of scientific knowledge systems that are applied in material production life to achieve the necessary purposes. People. Technology is an indispensable important step in the progress of mankind.

Technology is represented by two components hardware and software:

1.1.2. The concept of productive forces from the point of view of Marxism - Leninism

The structure of the productive forces includes means of production, first of all tools and workers

The object of labor is the natural object that man acts on and transforms them into different material possessions.

Second, workers: People with their strength and intelligence create work tools and use those tools to influence nature to create material products to satisfy their own needs. and social.

The tool of labor is considered as a dynamic factor of the productive forces. It is always improved to suit new conditions, is constantly being created, and it is the development of working tools that has created many miraculous changes in social production.

Thus, the factors constituting the productive forces have a close relationship with each other in the production process, in which workers are the decisive factor and the means of production play an important role.

1.2. THE ROLE OF SCIENCE - TECHNOLOGY IN PRODUCTION FORCE

1.2.1. Science - technology in the development of human society

The first scientific and technological revolution (18th century), originated from the period of replacing manual labor with mechanized labor, the second (19th century). The basic content of each revolution is the replacement of rudimentary, manual production tools, outdated and isolated production processes with the application of new scientific and technical achievements to production, gradually moving forward. mechanization, automation, modern production lines with new energy sources, ... that is to improve, replace, and invent new tool systems, on that basis to improve productivity labor and increase wealth for the society.

* Impact of science and technology in social development

With the application of science and technology in many fields, people are becoming more and more civilized and advanced, thanks to the great significance of science - technology.

1.2.2. The role of science and technology in the development of productive forces

From the 18th century until now, science and technology have gradually developed, many machines and tools for labor were born, it has gradually replaced human labor in the process of creating material wealth in society. is very large.

It can be seen that with the development of science and technology, the production force is increasingly improved, thereby helping to increase labor productivity and create more material wealth for society.

Da Nang city has a particularly favorable position for rapid and sustainable development. Located on the North - South traffic axis of the country by road.

Da Nang is located in a typical tropical monsoon climate with high temperature and little fluctuation. Climate Da Nang is a transitional place alternating between Northern and Southern climates, with the dominant characteristic being the typical tropical climate in the South. There are two distinct seasons each year.

In addition, Da Nang is also the eastern gateway of the East-West Economic Corridor, which is one of five economic corridors developed under the initiative of the Asian Development Bank in the Greater Mekong Sub-region.

Da Nang is a locality rich in revolutionary traditions with national cultural identity, characteristically honest, friendly, and heroic in fighting and defending the country.

Thus, with the city's geographical and socio-economic advantages, it has created great opportunities for socio-economic development, especially in key economic sectors, with conditions to apply science and technology. technology into the comprehensive development of the city.

2.1.2. Location and advantages of science - technology in Da Nang city

Da Nang is a big city in the central urban chain, Da Nang is identified as one of the major economic - cultural centers of the Central region and the whole country.

Firstly, the infrastructure and organizational system of science and technology have developed rapidly. cornucopia.

Third, the investment in equipment and technology innovation, diversification and improvement of product quality is really focused.

That is both a great and rare advantage of Da Nang's science and technology for comprehensive socio-economic development.

Over the years, under the continuous development of science and technology, it has had a great impact on the human resources of Da Nang city, which is the change in quantity and quality in the direction of increasing quantity. skilled human resources, gradually reducing manual labor.

In terms of quality, Da Nang is one of the country's famous masterpieces of spiritual land. Absorbing the cultural traditions of our nation for many generations, the people of the Central region in general and the people of Da Nang in particular have inherited and promoted the good values ​​of the Vietnamese people.

Regarding the level of education, as we all know, Da Nang city is a land with a tradition of studiousness and determination to learn to be successful, so Da Nang's learning movement is very active.

* Science and technology human resources in research and development organizations

Over the years, especially from 2005 to now, the City People's Committee has issued many policies on training and fostering cadres, civil servants and public employees;

The city has many policies to develop high-quality human resources to serve the needs of industrialization and modernization such as investment in attracting talents; training and fostering cadres and civil servants; in parallel with training human resources in the country, the city also develops a project to send people to train abroad; organizing a pilot exam to recruit leadership positions... Besides, human resources in local administrative agencies at ward and commune levels also have many changes in the quality of grassroots cadres.

Da Nang is a center with a team of science and technology staff occupying a high position compared to the whole country.

The investment in the development of the city's education and training system has trained qualified and adequate human resources in all industries and fields, meeting the demand for human resources, not only for the city. but also meet the needs of the Central and Central Highlands regions.

Science and technology development is one of the key orientations of Da Nang towards a modern and developed city.