Finally, for customer satisfaction studies in the banking sector, Grönross’s model of technical quality and skill quality is more reasonable (Lassar et al, 1998). However, this study does not consider the corporate image factor, so this model is not used. Oliver’s Perception-Perception model was also rejected because this study did not measure customer expectations. 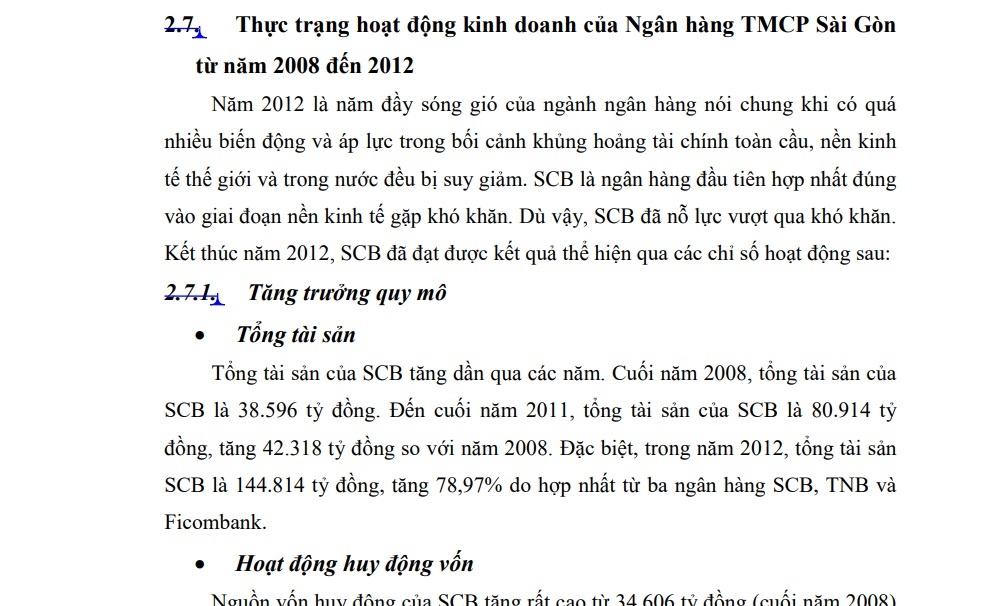 2.6. Overview of Saigon Commercial Joint Stock Bank after the consolidation

2.6.2. The process of formation and development

Saigon Commercial Joint Stock Bank, formerly known as Que Do Commercial Joint Stock Bank, was established in 1992 under the operating license number 00018/NH-GP dated 06/06/1992 by the Governor of the State Bank of Vietnam and under the license of the State Bank of Vietnam. 308/GPUB dated June 26, 1992 of the People’s Committee of Ho Chi Minh City.

On the basis of inheriting the inherent strengths of the three banks, the Consolidated Bank immediately has a strong advantage in the banking sector and is among the top five largest joint stock banks in Vietnam. Specifically: Charter capital reached VND 10,584 billion, Total assets of the bank reached about VND 154,000 billion, Fund mobilized from credit institutions, economy and residents of the bank reached more than VND 110,000 billion. The accumulated pre-tax profit reached over 1,300 billion VND. Currently, the bank’s system based on the total number of head offices, transaction offices, branches, transaction offices, savings funds, and transaction points is estimated at 230 units across the country. most convenient and economical.

From the available strengths and the determination of the Board of Directors, the Board of Management and all employees, the support of the State Bank, Bank for Investment and Development (BIDV), especially With the trust and support of customers and shareholders, Saigon Commercial Joint Stock Bank (Consolidated Bank) will certainly promote its strengths in financial capacity, operational scale and management ability to quickly become one of the leading financial and banking groups in Vietnam and of international stature, strong enough to compete in domestic and foreign markets. Thereby, providing flexible and high-quality financial solutions to meet the needs of all customers as well as enhance the value and interests of shareholders.

2.6.3. Products and services being offered

– Exchange for other face value.

– Paying on the spot.

– Escrow service to establish a business and maintain business operations.

– Service of supply and payment of domestic registration checks.

2.7. Situation of business activities of Saigon Commercial Joint Stock Bank from 2008 to 2012

2012 was a turbulent year for the banking industry in general when there were too many fluctuations and pressures in the context of the global financial crisis, the world and domestic economies were in decline. SCB was the first bank to consolidate in a time of economic difficulties. However, SCB has made efforts to overcome difficulties. At the end of 2012, SCB achieved the following performance indicators:

SCB’s mobilized capital increased very high from 34,606 billion VND (at the end of 2008) to 106,712 billion VND at the end of 2012. With the policy of ceiling deposit interest rate reduced from 14%/year from the beginning of the year to 8%/year. At the end of the year, together with the general difficulties of the economy and the banking industry, as well as being the first bank to consolidate in Vietnam are challenges that SCB must overcome. With many drastic and positive solutions, increasing capital through mobilization channels, ensuring liquidity safety and complying with regulations of the State Bank, by December 31, 2012, the deposit balance reached 106,712 thousand billion, up 35.75% compared to 2011. 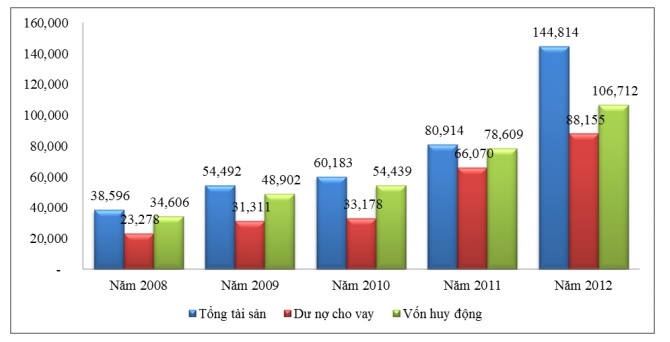 Despite the difficult business environment in 2012, complicated changes in interest rates and exchange rates and the first year of consolidation, SCB managed to achieve a pre-tax profit of VND77 billion. 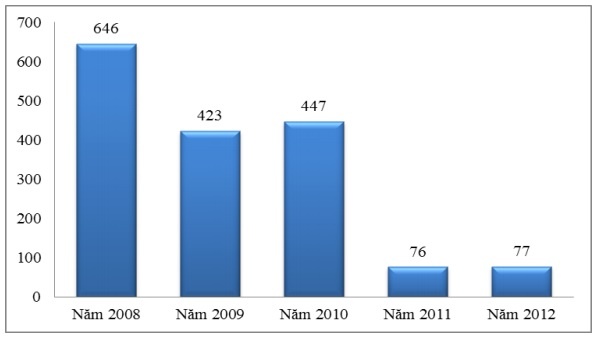 For the whole year of 2012, SCB’s total mobilized capital from economic organizations and residents reached VND 106,712 billion, an increase of VND 28,103 billion, an increase of 35.75% compared to 2011, the growth rate average over 2,300 billion VND/month (see chart 2.1). In 2012, SCB has continuously implemented many attractive deposit mobilization products and policies with an appropriate and highly competitive interest rate mechanism. for customers by flexible and comprehensive deposit mobilization products and policies. Some of the deposit products for individual customers can be mentioned such as: “Consolidate millions of springs”, “Enjoy the summer with SCB”, “Billionaire’s fortune”, “Sparkling Christmas – Win gifts” level”…; deposit products for corporate customers such as: “Multi-benefit payment”, “Flexible investment”, “SCB 100+” with VIP customer policies, preferential policies for middle-aged customers , elderly. Through that, SCB has attracted the attention and support of customers across the country; building a loyal customer base, and helping SCB approach and attract new customers.

Besides, with the policy of accompanying and sharing difficulties for customers, especially corporate customers, SCB advocates selective credit growth, focusing on businesses in priority areas. , with typical loan products such as: “Lending for agricultural and rural development”, “Lending for rice purchase”, “Lending for farming and seafood processing”. In addition, SCB continues to apply preferential policies for customers such as preferential interest rate policy for customers who transfer revenue to SCB. Especially, in 2012, following the policy of the State Bank, SCB continuously reduced lending interest rates to support businesses facing difficulties in production and business activities.

Always ensure that the amount of gold and foreign currency meets the needs of customers with an appropriate and competitive exchange rate from time to time. As of December 31, 2012, the total sales of USD and other foreign currencies of SCB reached more than USD 1,426.8 million. 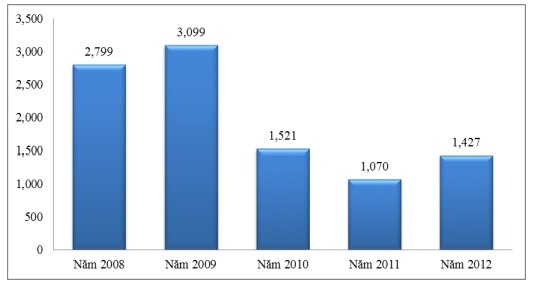 Developing many derivative products such as futures, swaps, etc. to help customers be proactive in hedging against exchange rate risk. Sales in 2012 of these products reached more than 188 million USD.

By the end of 2012, SCB had 138 ATMs operating nationwide and issued more than 31,515 domestic debit cards, including co-branded cards, Rose cards and Tai – Loc – Phu – Quy cards with different colors. Feng shui colors and outstanding transaction limits to meet the different needs of many customers. In addition, in order to encourage customers to use ATM cards, SCB does not collect fees for basic transactions of cardholders at ATMs such as withdrawing money, looking up balances, transferring funds, printing transaction statements, etc.

By the end of 2012, SCB had installed 133 POS machines at hotels, restaurants, commercial centers, supermarkets, and retail stores with a payment turnover of VND 188 billion. In addition, SCB has implemented salary payment service via card for 51 businesses with a total salary of 524 billion dong. At the same time, completing the implementation of the international MasterCard credit card project.

SCB has successfully connected to Banknetvn and VNBC systems. SCB has been a pioneer in joining the Smartlink card alliance, and at the same time, SCB is also one of the first four banks of this alliance to successfully connect to the Banknetvn system. On June 10, 2010, SCB successfully connected with the ATM system of Dong A Commercial Joint Stock Bank under VNBC alliance, bringing the total number of allied banks that SCB card can transact with up to 30 banks with thousands of transactions. ATMs nationwide. 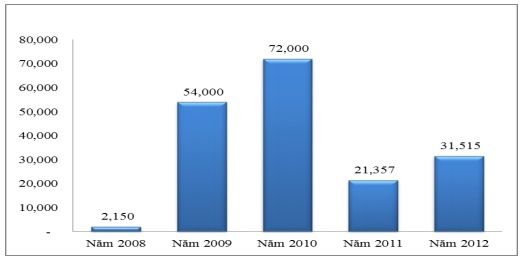 As of the end of 2012, the transaction turnover through the ebanking channel reached more than 1,252 billion VND, an increase of 751 billion VND compared to 2011. Customers can use the utilities provided by the ebanking service such as: online money transfer within and outside the system, deposit / finalize / renew savings accounts, look up account information, topup, pay bills for electricity, water, telephone, ADSL, pay for online shopping such as airline tickets , games, movie tickets… and other operations without fear of risk, without fear of being stolen or copied. This is a fast, time-saving transaction method, anytime, anywhere, customers can make transactions 24/7 without having to go to the bank.

SCB has received Verisign’s certificate of authenticity in transmission encryption. At the same time, SCB has also developed a variety of authentication methods via SMS and Entrust token. Customers’ financial transactions are checked and authenticated through two rounds with passwords and randomly generated security chains from the system to ensure that transactions are processed accurately, safely and securely.