- Transforming the accounting account system, accounting contents, accounting voucher regime and building all kinds of accounting reports and financial statements in accordance with the practices and standards of the international accounting system. .

- The transformation of the accounting system must be carried out on the basis of selectivity, in accordance with the principles and accounting practices of developed economies from the point of view of the Ministry of Finance and the State Bank.

- Implement the annual audit regime and each bank needs to choose for itself a reputable auditing company, performing the audit according to international standards.

5.3.2.1 Recommendations to the Government

The government plays an important role in macroeconomic management, creating an environment for the development of commercial banks as well as businesses in the economy, thereby also having certain influences on the investment portfolio. loans from commercial banks.

The reality of the past time has shown that the role of the Government in operating is not really effective, which has a negative impact on banking activities in general and loan portfolio management in particular of commercial banks. Therefore, the author has some recommendations to the Government as follows:

Firstly, in the coming period, the Government needs to consider to ensure a reasonable harmonization between the economic growth target and the goal of economic stability and inflation control. The reality of the past years has shown that, overemphasizing economic growth on the basis of investment capital (in breadth) rather than on effective productivity (in depth), on the one hand has led to capital investment is scattered and inefficient: some non-manufacturing industries grow "too hot" without control, while other production and business sectors face difficulties.

On the other hand, in the condition that all economic sectors have difficulty in capital, the capital demand for economic growth will be pushed to the banking system. This is also a reason for the banking system to expand too much in number (banks, branches) and at the same time with excessively "hot" credit growth, the unbalanced portfolio structure in this period. period 2006-2007, causing many consequences for later years. Therefore, it is thought that the Government needs to consistently and persistently pursue the goal of economic stability, on that basis, to develop appropriate operating policies with long-term stability, creating peace of mind. trust for actors in the economy.

Second: Accelerate the process of economic restructuring, including restructuring the banking system and businesses, accept the dissolution/bankruptcy of weak businesses, economic groups and banks. consider it as a necessary screening process, to form a market economy with actors with independent and really effective competitiveness. At the same time, there are measures to remove (such as tax policy, support for trade promotion ...) to help business entities facing difficulties to stand firm and overcome the current economic crisis. indirectly positively affects lending activities and loan portfolio of commercial banks.

Thirdly: There are measures to improve macro management capacity, including the ability to monitor and forecast the economy, etc. to help business entities, including banks, to develop strategies. long-term business strategy, favorable for the good implementation of loan portfolio management in a proactive manner, maintaining stability, and being able to withstand adverse impacts of the economic cycle.

Fourth: It is necessary to form and maintain the habit of information transparency at a macro perspective as well as in industries and business entities, step by step creating a healthy socio-economic environment, creating trust for customers. The business world, people as well as partners and countries have relationships with Vietnam, affirming the prestige and national brand name in the international business environment. 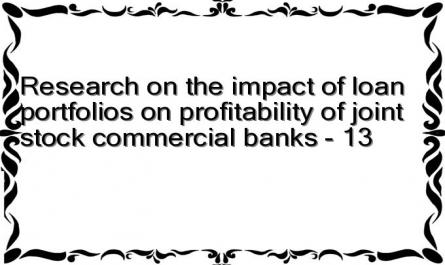 As the main contributors to economic development, businesses need to have a long-term strategy to improve their financial capacity, limit the business scale within the capital capacity, and not be too dependent on sources of capital. bank capital. The past period has shown that many businesses abuse financial leverage, expand their business scale excessively, exceed their capital capacity as well as management capacity, so when the economy has unexpected fluctuations. profits, bank interest rates increased, many businesses fell into loss and had to close down and go bankrupt.

5.4 Limitations of the thesis

The data for this study are only domestic commercial banks, without mentioning joint venture banks and foreign banks in Vietnam. Therefore, the research results do not fully reflect the fluctuations in the performance of the entire banking system in Vietnam.

The objective of DMCV management is to show the level of loss that the bank can accept in relation to the maximum profit the bank expects to achieve.

Therefore, when studying DMCV we need to consider 3 issues:

- Examine the relationship between loan portfolio and bank's risk.

- How to manage loan portfolio effectively.

The thesis only considers the impact of the loan portfolio on the bank's profitability. The remaining two issues will be a new research direction of the thesis.

2. Government (2006), On the approval of the Project on the development of the banking industry in Vietnam up to 2010 and orientations to 2020.

5. Akhavein; Berger and Humphrey. 1997. "The Effects of Megamergers on Efficiency and Prices: Evidence from a Bank Profit Function," Board of Governors of the Federal Reserve System (US).

14. Bourke. 1989. "Concentration and Other Determinants of Bank Profitability in Europe, North America and Australia." Journal of Banking and Finance 13, 65-79.

20. Fotios and Kyriaki Kosmidou. 2007. "Factors Influencing the Profitability of Domestic and Foreign Commercial Banks in the European Union." Research in International Business and Finance, 21, 222–37.

23. Haslem. 1968. "A Statistical Analysis of the Relative Profitability of Commercial Banks." Journal of Finance, 23.

29. Profitability in Banking." Journal of Money, Credit, and Banking.

32. Should Banks Be Diversified? Evidence from Individual Bank Loan Portfolios.

34. Short. 1979. "The Relation between Commercial Bank Profit Rates and Banking Concentration in Canada, Western Europe and Japan." Journal of Banking and Finance 13, 209-19.

35. Smirlock. 1985. "Evidence on the (Non) Relationship between Concentration and and Profitability in Banking." Journal of Money, Credit, and Banking.

37. Witton (1999),Don't Put All Your Eggs in One Basket? Diversification and Specialization in Lending, Working Paper, University of Minnesota.