On the whole text (including sentence, paragraph, and item levels), the discourse analyzer gave an accuracy of 63%. At the sentence level, the accuracy achieved is approximately 80%. Deriving from the characteristics of Vietnamese compound sentences that most of the propositional limits can be detected by discursive signs combined with some syntactic features, the thesis has improved the discourse segmentation algorithm to a higher level. sentence to split the compound sentence into clauses, then build the discourse tree of the sentence. The clauses will be parsed separately, and the discursive relations between the clauses will be transformed into large connections in the linking grammar into a complete analysis of the entire sentence. This is possible because, for the association grammar model, the association requirement only determines the direction of the association, so there is no need for overly complex evaluations of dependencies. Since the scope of analysis is compound sentences, the limits of the propositions are quite clear.

The thesis used the names of 18 discursive relationships between the propositions [1] and [9] as the connection names. These connections are massive because they link phrases together. They are built between pairs of clauses according to the discourse tree of the sentence. Figure 3.10 shows the discourse tree of the sentence “It rained heavily and the wind was very strong, so I had to leave school, my mother had to leave work”. This sentence has 4 clauses denoted A1, B1, C1, D1. Discourse relations: cause, association, enumeration are transformed into connections. The connection between clauses must still satisfy the following requirements: 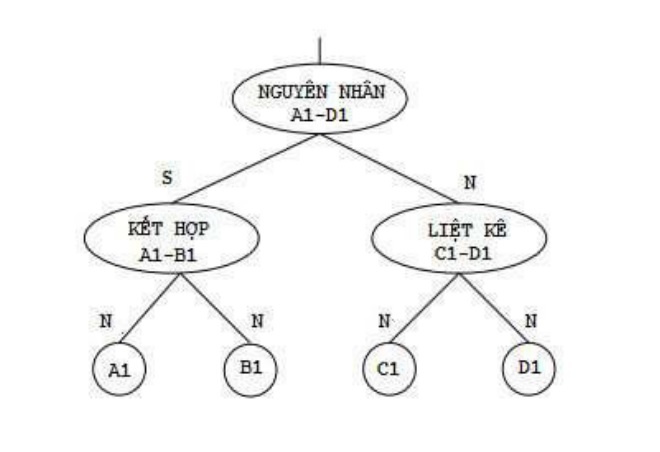 Figure 3.10. Discourse analysis tree of the sentence “[it rained heavily and A1] [the wind was very strong, so B1] [I had to leave school,C1] [my mother had to leave work.D1]”

To ensure flatness, that is, the links do not intersect when plotted over words, it is necessary to select one representative word from each clause to link. Each word in the clause will be assigned a weight (rank). The word with the least weight corresponding to the highest link will be chosen to represent the clause.

Thus, the parsing process for compound sentences needs to go through the following steps:

The smallest piece of text between which discursive relations exist is called Elementary Discourse Units (EDU). The EDU can be a clause or a clause title.

The thesis on improving the algorithm of Marcu [89] for discourse segmentation. The notation for dividing text into prime fragments is essentially quite similar to that of English. Table 3.3. below allows to identify potential discursive signs in the text to be analyzed.

Discourse segmentation algorithm [89] allows to read all the discursive signs of the text, each sign corresponds to one of 10 actions NOTHING, NORMAL, NORMAL_THEN_COMMA, COMMA, END, MATCH_PAREN, COMMA_PAREN, MATCH_DASH, SET_AND, SET_OR. The following are descriptions of some of the most common actions:

Based on the algorithm of Marcu [89], the thesis segments Vietnamese text with the following actions: COMMA, NORMAL, NOTHING, NORMAL_THEN_COMMA, END, SET_ AND, SET_OR, MATCH_PAREN, COMMA_PAREN, MATCH_DASH, PH.

After having built a parser on a linked grammar for a single sentence, the thesis used this tool to more thoroughly solve the problem of ambiguity with the word “and”.

The action NORMAL_THEN_COMMA, is related to the word “and”. The thought process of the thesis when the discourse segmentation encounters the word “and” is as follows:

The handling of the NORMAL_THEN_COMMA action, the action associated with the word “and” as in the algorithm described later.

Commas require more complex handling. In [89], commas are handled by the discourse analyzer in the two actions COMMA and NORMAL_THEN_COMMA, the other cases are ignored. Now the thesis deals with some other cases. When a comma is encountered, even though the term under consideration is a syntactically correct clause, it is unlikely that the text limit has been added immediately after the comma. It is necessary to consider whether the sign after the cluster is a comma. If it is a comma, the text limit will be filled in after the first sign other than a comma. For example, in the sentence “I bought many toys, cakes, and candies for my children to give you”, the text limit should be added after the word “candy” instead of after the word “toys”, even though the phrase “I buy a lot of toys” is a complete proposition. This work is done by the action PH associated with a comma.

Here is the entire discourse segmentation algorithm. The input of the algorithm includes the sentence to be analyzed and the array of discursive signs in the sentence. The output of the algorithm is the input sentence filled with [] pairs to indicate the limit of the proposition. In this algorithm, the thesis has edited the NORMAL_THEN_COMMA action and added the PH action to handle ambiguities with “and”, “or” and commas. Other treatments according to [89].

Explain the meaning of objects used in the algorithm:

For example: With sentence S as “It was raining heavily and the wind was very strong, so I had to miss school, my mother had to leave work”, the array marker[4] has the values ​​of the elements as “and”, “should”, sign commas and end sentences. The word “and” is associated with the action NORMAL_THEN_COMMA. In the algorithm’s processing in Figure 3.11, the value of isClause function with the phrases “it rains a lot” and “the wind is very strong” is true, so the Clauses set of clauses is added with the clause “it rains a lot and” and NORMAL_THEN_COMMA is saved in status. When dealing with the “should” sign with the NORMAL action, the clause “the wind is very strong so” is added to Clauses, the status is empty. When a comma is encountered, because the isClause function with the phrase “I have to leave school,” and the phrase after the comma “my mother has to leave work” both evaluate to true, these two clauses are added to Clauses. The ending sign corresponds to the NOTHING action, so do not add new clauses to Clauses. The results of discourse analysis when testing are presented in Figure 3.19.