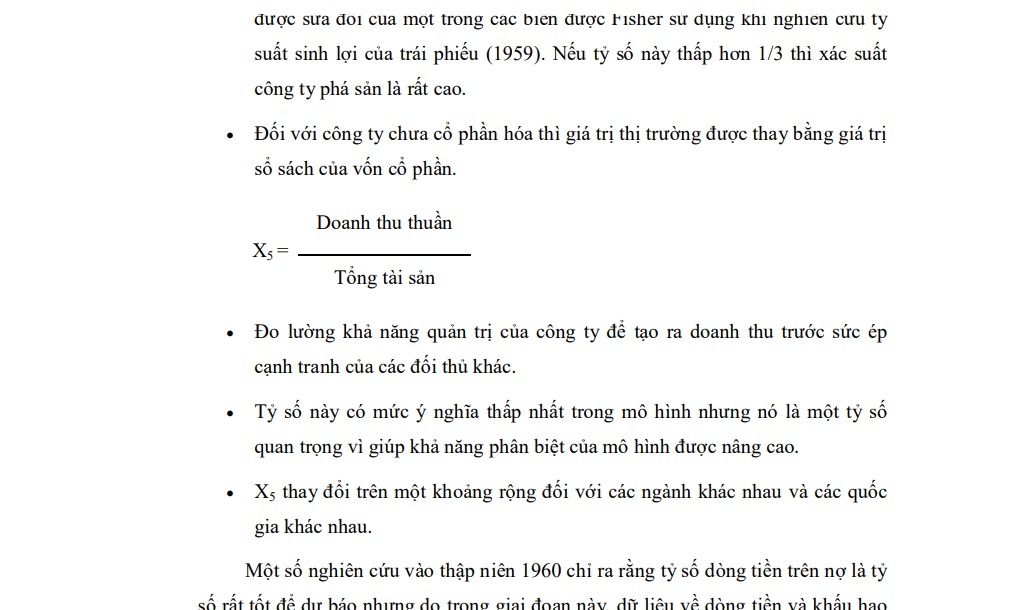 Separate financial indicators often used in credit scoring cannot accurately predict the likely trend of financial difficulties of enterprises because they depend on individual perceptions.

In order to increase the accuracy when predicting the risk of default of enterprises in credit scoring models, commercial banks can use multivariate forecasting models. There are many methods to predict the risk of default of enterprises that have been developed and published. However, few methods are as thoroughly tested and widely accepted as Altman’s Z-score statistic function, also known as the Z-score.

The Z-index was developed by Edward I. Altman (1968), New York University. Later it was further developed by Steele (1984), Morris (1997) and other researchers. The general form of the model is Z=c+∑ciri (where: c is the number row, ri are the financial ratios and non-financial indicators used as variables, ci are the coefficients of each variable. number in the model). The Z-Index is the world’s most widely used, recognized and used tool by both academia and practice. This index is based on statistical methods with multifactorial discriminant analysis (MDA).

Some studies in the 1960s showed that the cash flow to debt ratio is a very good ratio for forecasting, but because during this period, the data on cash flows and depreciation of businesses are inconsistent, so the ratio is not consistent. Altman’s Z does not include cash-flow related ratios. This is quite consistent with the current situation of financial information of Vietnamese enterprises, moreover the Z-index has been used effectively in the US (95% accurate forecast for the data sample) and many other countries. Otherwise, it will probably also perform well in Vietnam in the field of credit rating or bankruptcy prediction.

From an initial Z index, Altman further developed Z’ and Z” to be applicable to each type of business:

For enterprises that have not been equitized, the manufacturing industry:

The Z-index” below can be used for most industries and types of businesses. Because of the large variation of X5 between industries, X5 is omitted.

The higher the Z index (or Z’ and Z”), the lower the probability that the borrower will default. To increase this index requires improving management capacity, reviewing to reduce inactive assets, saving reasonable costs, and building brands. It is the indirect combination of many financial and non-financial factors in the new model called the index of safety.

In addition to warning signs of bankruptcy, Altman studied over 700 companies to come up with an adjusted “Z” index:

Adjusted Z” is quite similar to the S&P bond ratings. The implication is that the mathematical models are comparable to the expert method. 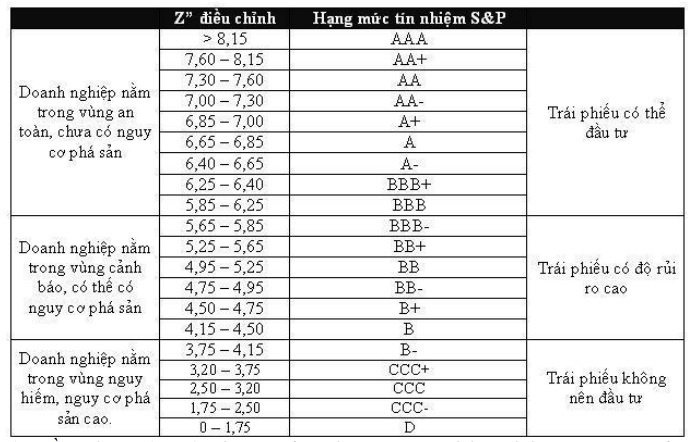 (Source: Altman (2003), The use of Credit scoring Models and the Importance of a Credit Culture, New York University. Lam Minh Chanh (2007), “Using the Z-score to estimate the Credit Score”)

1.3 Experience in corporate credit rating of some commercial banks in Vietnam

The system of financial indicators evaluated in Vietinbank’s credit model is based on the guidance of the State Bank and has some adjustments to the industry statistical coefficients according to calculations from Vietinbank’s credit information system data.

The corporate credit model at Vietinbank includes 11 financial indicators, divided into 4 groups of industries and 3 levels of business size. Groups of non-financial indicators in the evaluation model have different weights between SOEs, foreign-invested enterprises and other enterprises, including: Cash flow, management experience capacity, transaction reputation with the bank, including credit and non-credit relationships, business environment, and other operating characteristics.

The corporate credit scoring model focuses on financial indicators with relatively large weights. However, the proportions of financial and non-financial expenditures are still similar with the deviation not too large.

Joint Stock Commercial Bank for Foreign Trade of Vietnam (Vietcombank) builds a credit society system on the principle of minimizing the subjective influence of non-financial indicators by designing non-financial indicators and providing cost guidance. details for the evaluation and scoring of the criteria. This is one of the leading commercial banks in Vietnam in applying debt classification according to Article 7 of Decision 493/2005/QD-NHNN.

The system of non-financial indicators includes more than 40 evaluation criteria belonging to five groups as presented in Table 1.5.

Based on the total score obtained multiplied by the weights as mentioned above, enterprises are classified into 16 groups, decreasing from AAA to D as shown in Table 1.7.

Through the consulting program of Ernst & Young Vietnam Co., Ltd (E&Y), Asia Commercial Joint Stock Bank (ACB) has also gradually improved its credit system according to the principle of minimizing credit risk in its portfolio of loans. bank credit.