  Savings and Investments: The branch attracts savings from residents and businesses with many attractive programs.

  Foreign currency trading: buying and selling foreign currencies in many forms such as Spot, Forward,... and performing transactions of valuable papers on the money market.

From 2009 to the end of 2011, although the mobilized capital in VND at the branch increased, but the huge decrease in USD capital caused the total mobilized capital in VND to decrease to 68.92% (in 2010 compared to 2009). ). Since 2008, oil and gas businesses have moved to Ocean Commercial Joint Stock Bank to transact under pressure from the Oil and Gas Group, causing a sharp decrease in USD capital at the branch.

Credit balance at the branch has increased over the years. Taking up a large proportion of the credit portfolio are loans to oil and gas, steel, power generation, water, real estate, and construction material production. Despite increasing lending and bringing in higher profits, debt management has always been focused by Vietcombank Vung Tau, the branch's bad debt ratio is low, from 1.91% (in 2009) to 0.4% (in 2011). ) on the total outstanding balance.

2.3 The situation of international payment activities at Vietcombank Vung Tau.

In general, the import-export sales of Vietcombank Vung Tau have increased steadily over the years, especially in export payments due to efforts to attract customers as well as improve professional skills. The growth rate of export sales was higher than that of imports and in 2011 export turnover exceeded import turnover.

Revenue from import-export operations did not increase correspondingly, on the one hand due to the policy of the Head Office to exempt and reduce money transfer fees for exporting enterprises, on the one hand, because the branch supports service fees for import-export enterprises in the area where the business is located. high number are loyal customers of the branch.

Table 2.3: Sales of export payments by payment method at Vietcombank Vung Tau in 2009-2011

Located in the key economic area of ​​the Southeast with many large enterprises present in the fields of oil and gas, seaports, tourism, construction,..., Vietcombank Vung Tau was instructed by most businesses to receive payment. move back. Money transfer revenue accounts for a large proportion of the branch's export turnover because the money transfer method is free, the documentary credit method accounts for about 20% of the export turnover and the collection method has the lowest revenue due to the fact that the transaction is free of charge. export industry does not like. In 2011, the value and number of payment items increased significantly compared to previous years, especially noting the sudden increase in money transfer payment, the number of L/C payments also increased significantly with the value of each payment. Due to high volume, L/C payment volume doubled compared to 2010. 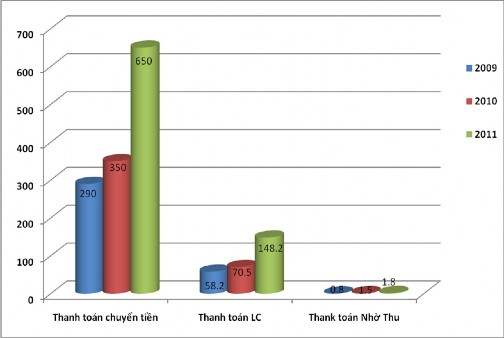 Figure 2.2: Sales of export payments by payment method at Vietcombank Vung Tau in 2009-2011

Due to the specificity of the area of ​​operation and the motive for establishment, the main export payment revenue of Vietcombank Vung Tau is petroleum, petroleum services, transportation, seafood, etc.

Since 2007, according to the centralized money transfer mechanism of Vietcombank's Head Office, most of the crude oil export money entrusted by Petechim Company (located in Ho Chi Minh City) to the Vietsovpetro Vietsovpetro Joint Venture is received. Moving to Vietcombank Ho Chi Minh City, the proportion of crude oil exports decreased gradually, instead of seafood, transportation, etc., there were negligible fluctuations year by year, because the business had a stable plan. with partners. As for other products, sales increased gradually, reflecting the growth and diversity of economic activities in the province.

Table 2.5: Sales of import payments by payment method at Vietcombank Vung Tau in 2009-2011

In 2011, the number of imported payment items at Vietcombank Vung Tau decreased significantly, mainly due to the decrease in the number of remittances. The value of L/C payment has increased due to the increased demand for imported machinery and equipment by the Vietnam-Russia Joint Venture - Vietsovpetro and the Gas Products Trading Company. 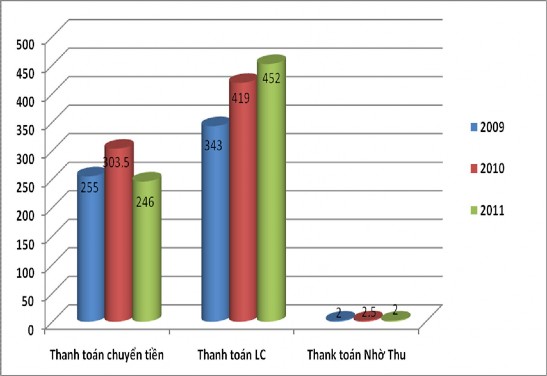 Figure 2.3: Sales of import payments by payment method at Vietcombank Vung Tau in 2009-2011

In contrast to export payment, importers often use L/C method. L/C payment volume always accounts for the highest proportion of import turnover and is 35% or more higher than money transfer revenue, especially in 2011 it is 84% ​​higher, showing that enterprises are increasingly prioritizing the use of L/C due to its outstanding advantages.

With the goal of serving oil and gas exploration and production in the southern continental shelf, most of Vietcombank Vung Tau's import L/Cs are machinery, equipment, and chemicals, 90% of which are by sight payment method. importing petroleum for gas product processing and trading companies and petroleum companies. Because the value of petroleum import L/Cs is usually quite large, the import turnover of this item is always the highest, followed by the import turnover of petroleum machinery and equipment. The remaining commodities such as iron and steel, chemicals... have increased steadily over the years. However, since the end of 2011, the largest petroleum importer at Vietcombank Vung Tau has transferred most of its transactions to Vietcombank Ky Dong branch, causing a significant decrease in sales of this product.

In fact, at Vietcombank Vung Tau, customers mainly use the money transfer method, followed by the documentary credit method with sales increasing steadily over the years, the collection method is the least used.

With its strength in international payment, a wide network of agents around the world, a policy of maximum support for exporters to make documents, and a low preferential payment fee, Vietcombank Vung Tau always attracts many foreigners. currency from export enterprises. Therefore, Vietcombank Vung Tau holds a large market share in the area in terms of export sales through itself and gradually increased over the years, from 40% in 2009 to 45% in 2011.

As a bank with many years of experience in international payment trusted by customers, L/Cs with complex payment conditions and large values ​​are often presented through Vietcombank Vung Tau for checking and payment. The branch has flexible policies on fees and export financing credits to encourage customers. The transparency of the SWIFT system helps to facilitate the international payment operations of the branch, the units easily choose a reputable bank, convenient to act as an advising bank, a bank

2.4 The situation of international payment by documentary credit method at Vietcombank Vung Tau.

In case the customer wishes to discount the set of documents, the discount request form enclosed with a copy of the L/C will be sent to the Customer department, the Customer department will issue a discount limit on the system and submit it to the Board of Directors for signature. approve the discount and then transfer it to the International Payments Department (International Payments Department) to make a discount on the Trade Finance program.

Step 1: Receive and check the application. The customer presents the documents to the Customer Department for appraisal and approval by the director, then moves to the International Relations Department to open the import L/C.

+ Amendment, extension of validity and/or increase in value: Receive and check dossiers. The customer presents the documents to the Customer Department for appraisal and approval by the director, then moves to the International Relations Department to amend the L/C.

To serve exporters in the area, Vietcombank Vung Tau can act as the advising bank, confirming bank or discounting bank. For the benefit of customers and their own safety, Vietcombank Vung Tau absolutely adheres to the steps in the business process. With an automatic, fast, accurate and secure information processing system, a worldwide network with flexible and preferential fees, and a team of skilled professionals, customers can completely trust the services they provide. services provided by Vietcombank, moreover, Vietcombank Vung Tau also advises on the most favorable payment terms in accordance with current international practices.

Through the effective support of Vietcombank, the exporter also creates a reputation for its customers. However, the branch's export L/C payment turnover is still limited because there are few state-owned export enterprises, many joint stock companies, limited liability companies, private companies, joint venture companies, etc. . does not meet the conditions on collateral for export financing or document discount.

The above table shows that, with the extensive SWIFT network, more and more customers informing L/C through branches, the total value and number of L/C export notices has increased rapidly over the years. In 2011, the value of petroleum export L/Cs of the Gas Products Trading Company was often very large, leading to a sudden increase in the total value of L/C notices, up 129% compared to 2009 and 106% compared to 2009. 2010 while the amount of L/C increased by 18.85% and 47.95% respectively. Most of the export L/Cs announced through Vietcombank Vung Tau are presented at the branch, only a few customers bring the L/C presented at another bank to enjoy a higher negotiable rate. Sales of export payments by L/C have increased unevenly over the years due to price fluctuations on the world market, as well as great impacts from the world economy. Sales of export L/C payments in 2011 increased quite high - up 154.

profile appraisal. The exporter is almost never refused payment when presenting the set of documents through Vietcombank Vung Tau. Although sales and discounts increased, the ratio of discounts to payments decreased, showing that the discounting business needs to be reconsidered because it cannot generate a reasonable revenue while Vietcombank's strengths Vung Tau is an export payment business. The main reason is that the branch is too careful in discounting, many customers want to discount vouchers but have not met the conditions on documents and collateral. In fact, many customers with discount needs have transferred documents to present and discount at other banks, reducing sales of export L/C payments, leading to the gradual loss of Vietcombank Vung Tau's position in the world. locality.

Maritime Commercial Joint Stock Bank accounted for the highest market share with 23% in 2009, 22.5% in 2010 and 20% in 2011, followed by Vietcombank Vung Tau which kept the ratio stable and increased steadily over the years, the highest was in 2018. 2011 with sales of 148.2 million USD, accounting for 22.8% market share of the whole area. State-owned commercial banks such as Joint Stock Commercial Bank for Industry and Trade, Bank for Investment and Development are also banks with stable transaction volume with a market share of 11% to 15%, Ocean Bank alone has just come into operation. Since 2009, export L/C sales are very low.

also increase accordingly. In 2011, the number of import L/C payment transactions at Vietcombank Vung Tau increased by 32 items compared to 2009 but the sales increased by 109 million USD compared to 2009, mainly from Vietsovpetro - Vietsovpetro and Trading Company. sales of gas products. This is a traditional customer of the branch, with a high credit limit and 100% deposit exemption when opening L/C. Some companies with good business performance are also considered and approved by the branch to open L/C without deposit and commit to provide foreign currency when due for payment at the listed exchange rate, creating favorable conditions for businesses in transactions. transactions with foreign countries as well as enhancing Vietcombank's reputation in the international market.