In the past time, especially after Vietnam joined the WTO, Vietnamese commercial banks have had a strong transformation to make good use of opportunities in the process of integration, to take full advantage of their competitive advantages. painting. It is having a large network, having traditional customers and understanding about customers as well as business conditions in Vietnam, accumulated professional experience over the years. This is an advantage in customer care. Therefore, domestic commercial banks still play a key role in providing traditional services of mobilizing capital and lending.

Banking technology is an area that banks pay great attention to, as a key means to shorten the development gap compared with banks of advanced countries in the region and the world. Most commercial banks have invested in building a core banking system, allowing centralized data management at the head office, minimizing risks in business activities.

About products and services: commercial banks have focused on innovation and launched many products to suit the needs of customers. In addition to traditional products such as deposits and loans, many new products have appeared to increase convenience for customers such as: increasing the convenience of personal accounts, developing card services, developing banking services. Modern banking services such as phone banking, internet banking... Deposit services are diversified, allowing depositors to have many options for their idle capital. In addition to the traditional fixed-rate savings deposit products, banks also offer deposit products with interest rates that fluctuate according to the inflation rate, guaranteed by the value of gold, and are compensated for the difference in interest rates. exchange rate difference…

is making efforts in renovating the governance structure in a way that is consistent with the standards of organization and operation of commercial banks.

Chart 2.1. Total assets of some Vietnamese commercial banks over the years 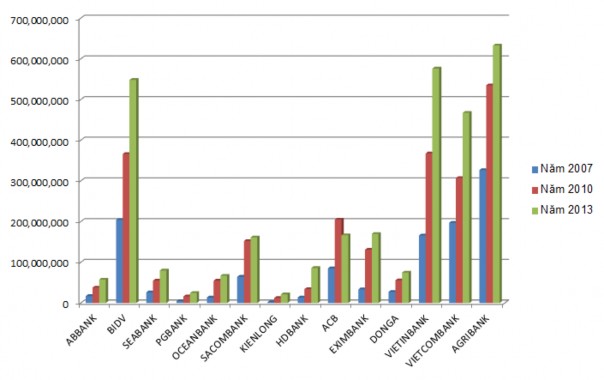 However, besides that, Vietnamese commercial banks still have many limitations as follows:

The first problem is the overwhelming influence of the State Bank. The SBV still deeply interferes in the operation of the commercial banking system, leading to a lack of responsibility and autonomy in business management. The roadmap for restructuring the banking system is slow and inefficient.

Sixth, the quality of human resources is poor, the salary policy is not satisfactory, which easily leads to brain drain.

Seventh, there is a lack of linkage between commercial banks, in addition, the domestic legal system and market institutions are incomplete and inconsistent.

Eighth, the credit sector is very risky, the bad debt ratio is high.

Ninth, the implementation of the modernization program of commercial banks is not uniform, so the coordination in the development of products and services is not favorable.

2.1.2. Current status of liquidity risk of Vietnamese commercial banks in the period 2007-2013

The liquidity risk of Vietnamese commercial banks started at the end of 2007 when the situation of excess liquidity before 2007 existed and the world economic crisis appeared. The liquidity crisis occurred at Vietnamese commercial banks due to the fast and urgent monetary tightening policy of the State Bank. The SBV's loosening credit policy (from 2003 to 2007 the money supply increased by 25% per year while keeping the interest rate and required reserve ratio unchanged) has caused inflation to continue to be high, and to leapfrog. to over 12% at the end of 2007. Total outstanding loans in the middle of 2007 were nearly 1000 trillion VND

The liquidity situation of commercial banks has improved, but there are still complicated developments in 2009, the State Bank directed commercial banks not to increase credit by more than 25%, and at the same time, the State Bank also announced to strictly control the money supply through the banks. open market. Directing not to use loans for real estate investment and financial investment activities is also a measure to restrain credit growth. One of

The point of interest in 2010 is Decree 13 stipulating that the minimum charter capital of commercial banks must reach VND 3,000 billion. The increase of charter capital is a reasonable request of the State Bank to ensure the safety of commercial banks' operations. However, in the period when banks are lacking capital for their business, this is a dilemma. Therefore, the liquidity pressure is even higher. By the end of 2010, there were still 10 banks that did not meet the minimum charter capital requirements. But thanks to the policy of controlling credit growth in 2009, in the worst case scenario when these banks fail to complete the capital increase in 2010, the liquidity of the banking system will hardly be affected too much. Most banks have met the minimum CAR ratio of 9% at the end of 2010. By the end of 2010.

2010, most commercial banks have met the minimum CAR requirement of 9% 12 . Wear

Although the capital adequacy ratio is in accordance with the requirements, this still does not accurately reflect the liquidity status of the banking system during this period.

In 2011, liquidity risk became a serious concern for the banking system. The capital mobilization market from residents and economic organizations decreased compared to previous years. Total deposits of economic organizations at commercial banks decreased sharply in 2011, leading to a decrease in the currency turnover rate of the whole economy. In addition, the policy of ceiling deposit interest rate in VND at 14% has caused a decline in deposits from the population, and at the same time encouraged the accumulation of other assets by the people. Therefore, the interest rate race among commercial banks in the last months of 2010 continued in 2011 with popular deposit interest rates at 14-16%. From the difficulties of the market, some commercial banks have the advantage of mobilizing capital that has been lent on the interbank market with high interest rates,

row. Liquidity difficulties at some small banks that have loans from big banks, plus the situation of intertwined loans between banks makes the risk level of the whole Vietnamese banking system become greater. than. Interbank interest rates in September 2011, after 4 consecutive months of being stable at 11-12%/year, rebounded and in some mid-October trading sessions up to 30-40%/year, has clearly revealed the lack of liquidity in some commercial banks.

In 2012, the liquidity stress was only temporary and local, not on a large scale as in the previous period. In addition, credit institutions no longer dare to lend with lowered conditions to receive credit risk and the imbalance between deposit and lending in the last months of 2012, the liquidity situation has changed a lot. after 5 credit institutions were fully restructured, it went smoothly. As a result, deposits in the banking system still increased by about 16%, bank liquidity was abundant, solving the long-standing painful problems of the banking system.

In 2012, the liquidity risk problem of the whole banking system was consolidated and stabilized. This is shown based on the following signs: (i) Interest rates in the interbank market are quite stable and dropped sharply from over 20% to 10%

- 12% depending on the term, especially overnight transactions have temporarily calmed down; (ii) There is no sign of a decrease in deposits while other investment channels such as real estate and securities are quiet; (iii) There are no open deposit interest rate races in the market.

The SBV has minimized the liquidity risk of the system by coordinating with stronger banks to provide liquidity to weaker banks. Some other small banks at risk of insolvency have been prevented and are operating stably again. Operations in the interbank market have been adjusted towards more transparency. The growth of capital mobilization from the population is quite high, both in domestic and foreign currencies.

In 2013, the liquidity of the banking system continued to be consolidated and is now quite abundant compared to the previous period because the deposit growth rate is always much higher than the credit growth rate of the system. . Credit growth of the whole system in 2013 was determined by the State Bank at 12%. Excess liquidity contributed to lower interest rates and credit institutions began to shift to other assets such as bonds. This is a success of the State Bank in using its monetary policy implementation tools.

To see more clearly the liquidity situation at Vietnamese commercial banks, we consider important factors such as equity capital, lending rates of banks over the years through charts 2.2 and 2.3.

Chart 2.2. Loan situation of some Vietnamese commercial banks over the years 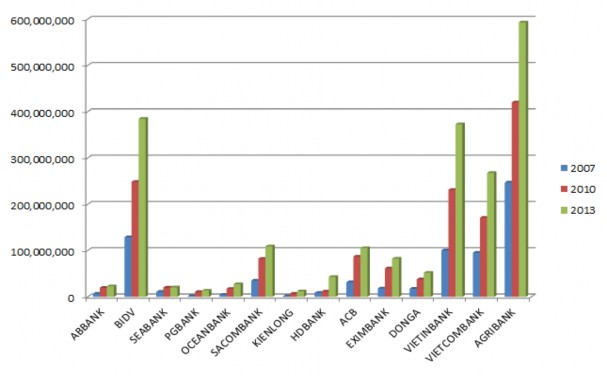 Chart 2.3. Own capital of some Vietnamese commercial banks over the years 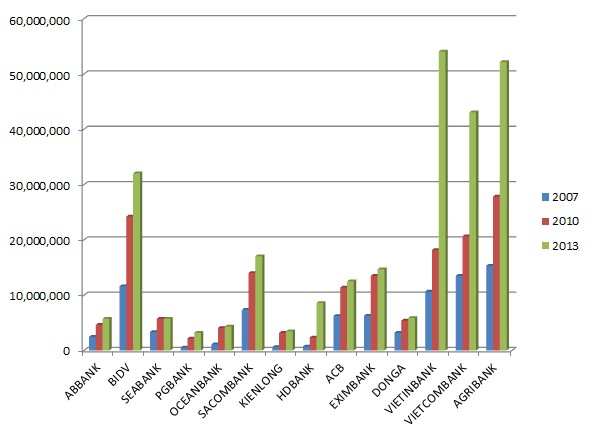 The data used in the research is collected from the financial statements of 14 commercial banks in Vietnam for the period from 2007 to 2013, macroeconomic data is taken from IMF data. Due to the use of data over time (2007 - 2013) and according to space (different commercial banks), the regression method with panel data is used in the study. Panel data is a combination of time series

time and cross-observations. Regression analysis using panel data helps the researcher to have better information in the study population, more variability, less multicollinearity between variables, more degrees of freedom, and high efficiency. than

For panel data, there are 3 models that can be used depending on the characteristics of the research scope, including:

Pooled OLS model:  is a simple model, when not considering the differences between research firms.

Fixed effect model (FEM):  further developed from Pooled when adding the difference in firms, and there is a correlation between the residuals of the model and the independent variables.

Random effect model (REM) : similar to the Fixed model in terms of the differences between firms, but there is no relationship between the residuals and the independent variables of the model.

The selection of research model will use Hausman test between Fixed effect and Random effect models. To determine the determinants of liquidity of Vietnamese commercial banks, the author builds the model as follows:

in is measured by taking

the difference between credits and deposits divided by total assets (financing gap).

SIZE: Size of total assets of the bank ETA: Ratio of equity to total capital 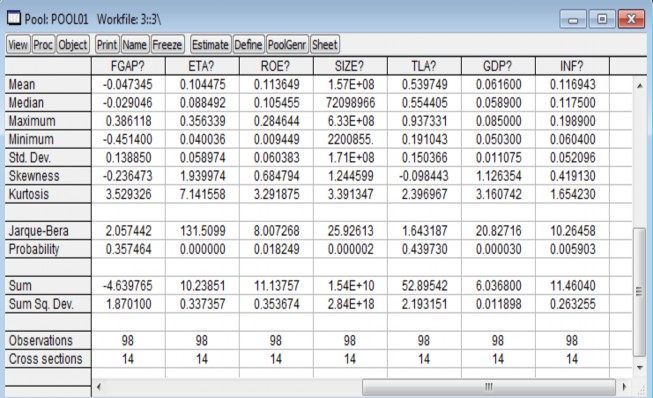 The difference between 3 models Pooled, FEM and REM:

REM: Regression model in the form of random effects approach. The idea of ​​this approach is that the difference in the specificity of the cross-units is contained in the random error. The individual characteristics between entities are assumed to be random and uncorrelated with the explanatory variables.

-  In the absence of factor variables outside the banking system

Table 2.2. Estimation results with Pooled model when there are no factors outside the banking system 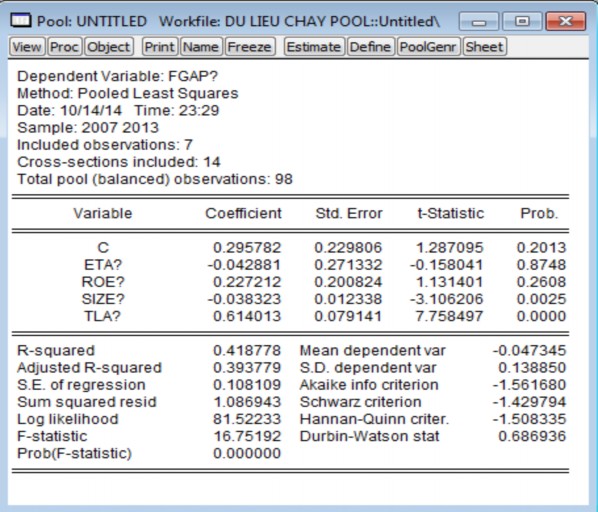 -  Where there are factor variables outside the banking system

The estimated results with the Pooled model when there are factors outside the banking system are presented in Table 2.3. 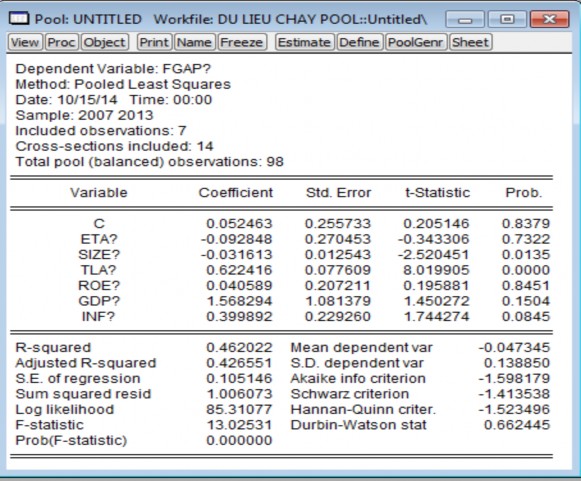 Table 2.3. Estimation results with Pooled model when there are factors outside the banking system

When including the Pooled model of factors outside the banking system (GDP and INF), the regression results also show that in addition to the two variables SIZE and TLA that are statistically significant in correlation with FGAP, the remaining variables is not significant with the model (expressed by p-value > α = 5%). 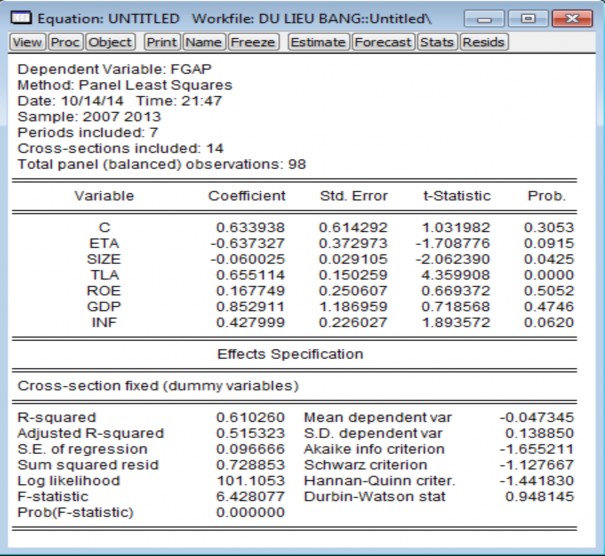