From the above analysis, it can be seen that: The main source of capital mobilization of the bank over the years is from deposits of customers who are economic organizations, in which deposits have a term of less than 1 year and deposits in domestic currency. Currency accounts for a large proportion of total mobilized capital. It can be said that the Branch has maintained and developed its capital mobilization activities, the mobilized capital has increased over the years. Achieving the above results is due to the bank’s good implementation of promotional activities, innovating transaction styles; perform well the service stages that indirectly contribute to attracting customers to open accounts; diversifying types of savings deposits, term deposits, opening up many forms of interest calculation suitable to the needs and tastes of all classes of the population. However, the capital mobilization of the growth is not too high, the Branch only stops at traditional customers, and the development of other sources is not really effective, not exploiting the full potential of the capital sources of the branches. individual.

Along with capital mobilization activities, lending activities play a decisive role in the business process of a bank. On the basis of stable growth of mobilized capital, despite the difficult economic situation and increasingly fierce competition in the banking industry, with its efforts, the Branch has achieved positive results. important role in credit activities, with a steady growth of outstanding loans over the years, ensuring the branch’s development.

Total outstanding loans of Sacombank – Hanoi continued to grow in the period 2010 – 2012. Looking at Table 2.2, it can be seen that in 2010, outstanding loans reached VND 784.91 billion. In 2011, total outstanding loans grew strongly to VND 1315.48 billion, an increase of 67.60% compared to 2010, proving that the branch’s loan expansion policy has been implemented effectively and reputable. Usage is further enhanced, especially in difficult times and high interest rates like 2011. 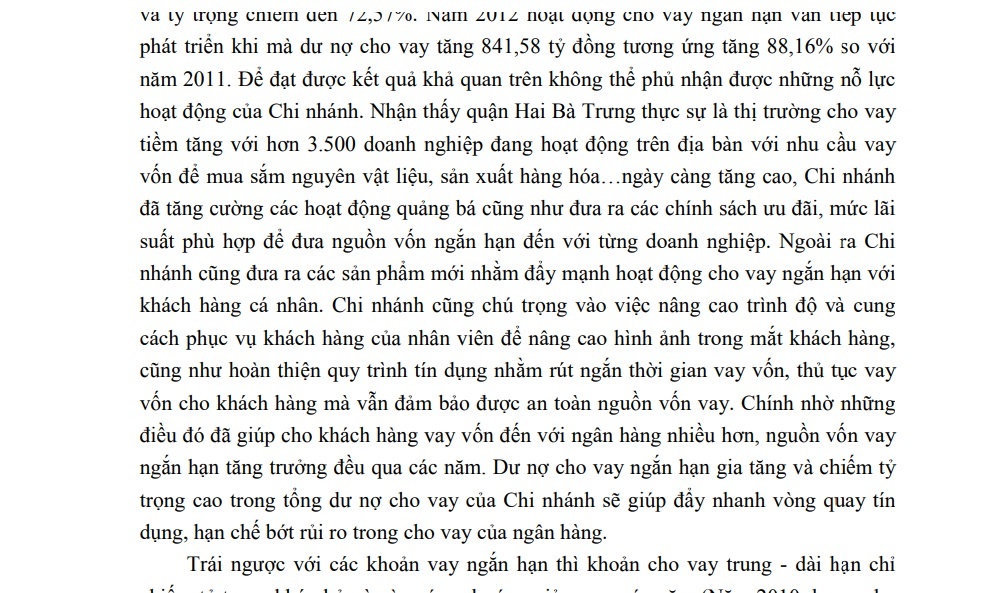 As of December 31, 2012, the total average outstanding loan of Hanoi Branch reached VND 2178.8 billion, an increase of VND 863.39 billion and a growth of 65.63%. The growth rate in 2012 was somewhat lower than in 2011, the reason being that the difficulties in 2011 continued until 2012, many businesses went bankrupt, the economy did not see any significant changes. , the tight monetary and fiscal policies of the government in regulating and controlling inflation have affected the borrowers as well as the bank’s lending activities.

Moreover, the Bank is also limited by the SBV with lending interest rates, reducing the growth rate of credit as well as the lending sector. However, the growth rate is still very positive because the Branch has well implemented measures such as prioritizing lending conditions to units with good credit history, offering preferential policies to each individual. specific industries at appropriate times and circumstances, increasing the attractiveness of loans. In order to ensure safety in lending activities, besides focusing on developing credit balances, the Branch always takes measures to strictly manage loans to keep credit risks at an acceptable level.

Structure by time of capital use

From Table 2.2, we can see the situation of lending activities as well as the loan structure of Sacombank – Hanoi in the period 2010-2012. In terms of loan use time, short-term loans always account for a high proportion and have a strong growth rate over the years. In 2010, short-term loans outstanding was 533.16 billion VND, accounting for 71.19% of total outstanding loans. In 2011, this outstanding loan increased by 421.46 billion VND (an increase of 79.05%) compared to 2010 and the proportion accounted for 72.57%. In 2012, short-term lending continued to grow when outstanding loans increased by VND 841.58 billion, equivalent to an increase of 88.16% compared to 2011. To achieve the above positive results, it is undeniable. branch’s operational efforts. Realizing that Hai Ba Trung district is really a potential lending market with more than 3,500 businesses operating in the area with increasing demand for loans to purchase raw materials and produce goods, the branch has increased strengthen promotional activities as well as offer preferential policies and appropriate interest rates to bring short-term capital to each enterprise.

In addition, the Branch also launched new products to promote short-term lending to individual customers. The branch also focuses on improving the qualifications and customer service of its staff to enhance the image in the eyes of customers, as well as perfecting the credit process to shorten the loan period and loan procedures. capital for customers while ensuring the safety of loans. Thanks to these things, more borrowers have come to the bank, and short-term loans have grown steadily over the years. The increase in short-term loans and account for a high proportion of the total outstanding loans of the Branch will help speed up the credit cycle and reduce the bank’s lending risks.

In addition, Sacombank’s orientation to promote the retail banking function and focus on short-term loans is also a reason for the decrease in the proportion of medium and long-term loans. Although the proportion decreased, the outstanding loans still increased over the years partly because the demand for long-term loans to invest in real estate was still quite high; Moreover, during this period the bank began to focus on the development of consumer lending products. 2012 marked a big decline in the growth rate of medium and long-term loans when in 2011 the growth rate was 43.34% and in 2012 medium and long-term loans increased only 6.04 % compared to 2011. The reason for the sudden decline is that the economy in 2012 continued to be difficult, causing most loans to invest in real estate and infrastructure projects and projects. of the enterprise, which the Branch previously lent, fell into overdue debt.

In order to ensure the safety of its capital, in 2012, the Branch limited the disbursement to customers and tightened the management as well as introduced stricter lending conditions for medium and large loans. In the long term, that has limited access to capital for customers. However, the development of medium and long-term loans is still really necessary. In order to do that, in the next period, the bank needs to come up with policies to resolve and restructure the outstanding mid- and long-term debts, attract new medium and long-term loans, but at the same time also strictly control and make larger provisions for these loans to ensure the quality and efficiency of lending activities.

Most of the bank’s lending activities focus on economic organizations, so the proportion of loans to economic organizations accounts for 73% (2010), 63.52% (2011) and 62.69 % (2012) of total outstanding loans and have grown in absolute terms over the years. In 2011, loans to economic organizations increased by 262.6 billion VND, equivalent to a growth rate of 45.83%, in 2012 increased by 530.39, corresponding to a growth rate of 63.48%. The above results were achieved because the Branch and its transaction offices are located in a convenient location, where many businesses and organizations are concentrated; along with the expanding promotional activities, the service level is increasingly improved; Loan products are increasingly diversified with appropriate interest rates.

This is a very positive growth rate, proving that the branch’s lending activities have achieved certain efficiency. However, the proportion of loans to economic organizations tends to decrease. The reason is that due to the branch’s change in customer target, the Branch began to focus more on lending to individual customers. With the current difficult situation of businesses, raising the loan balance for individual customers is the right and safe step at the present time.

The strong growth of outstanding loans to individual customers in 2011 was explained by high prices in the housing market, which made many people want to invest in this market for trading, speculation, and arbitrage. price difference, so the demand for loans of individuals also increases. Although until 2012, under the control of the State, the housing market also stabilized, but the growth rate for the year was still high. That is because the Branch has increased marketing activities to households and individuals, increased the convenience of using the bank’s products for customers, introduced preferential policies and interest rates. attractive¼has attracted more individual customers to the bank.

From Table 2.2, we can see that there is a large difference between the outstanding loans in domestic and foreign currencies. Customers with credit relations with the Branch are mainly economic organizations in the area, operating in the field of domestic trade and services, so the bank mainly uses local currency for loans. The branch’s mobilized capital is mostly from local currency, so local currency loans account for a large proportion of total outstanding loans, accounting for 80.80% to 83.50%. Loan amount in VND in 2010 was 643.17 billion VND; 2011 increased by 419.68 billion VND, equivalent to 65.25% increase compared to 2010; in 2012 increased by 756.46 billion VND, equivalent to an increase of 71.17% compared to 2011.