VPBank believes that with the above vision and strategy, the bank will fulfill its mission of bringing the highest benefits to customers, paying attention to the interests of employees and shareholders, building a culture of strong businesses, and effectively contribute to the development of the community.

VPBank’s new brand with the motto “Action for dreams”, was built from the following factors: Professionalism, Dedication, Differentiation, and Simplicity. Towards a long-term vision, VPBank is determined to promote the image of a bank that always tries its best to serve customers with a friendly attitude and fastest speed.

The new symbol of VPBank is Hoa Thinh Vuong, stylized with a subtle combination of firmness and soft curves, demonstrating the flexibility, friendliness and reliability that VPBank wishes to bring to customers. . The shape of the symbol is like a pair of brooding hands, holding the aspiration to rise, symbolizing the continuous upward development, a solid support to ensure growth and prosperity. The symbol is also reminiscent of two hands working together to build a community, a prosperous Vietnam.

The bright red color of the petals represents enthusiasm, hard work, creativity, prosperity and luck as well as a sense of responsibility towards society and the community in each of VPBank’s activities. .

2.1.2.1 The process of formation and development of VPBank Ha Tinh branch

2.1.2.2 The organizational structure of the apparatus

– VPBank Bank Ha Tinh Branch currently has 01 branch office and 04 transaction offices under, has 65 employees on the payroll and 20 employees with contract labor contracts. 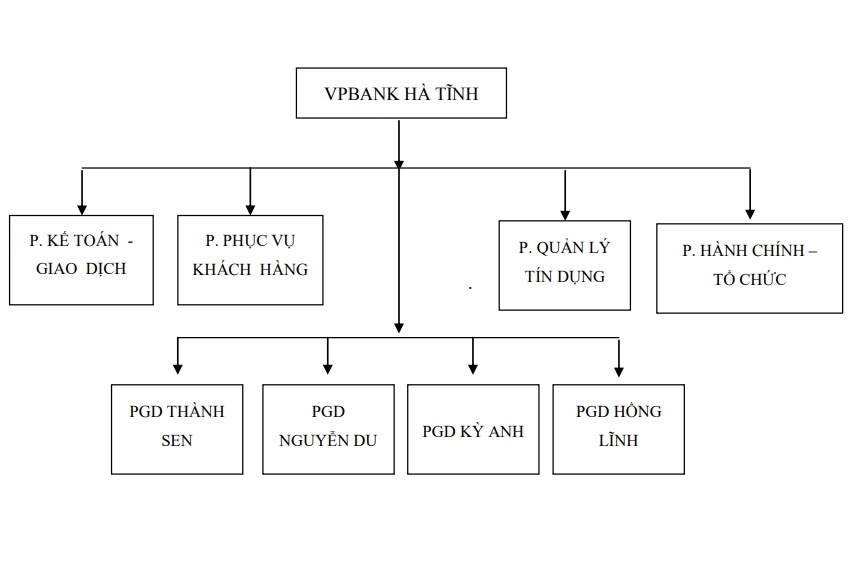 In recent years, VPBank Ha Tinh has always achieved stable and sustainable growth, even in the difficult context of the global financial crisis, signs of recovery and development are still quite conservative. Major State policies in the banking and finance sector are governed by market principles, so there may be many changes depending on the actual situation that directly affects the operations of financial institutions. , Bank. In addition, in the difficult business environment in the past few years, banks have made great efforts to find their own ways, have strong breakthroughs, and therefore, the competition in the market is fierce day by day. That result is thanks to the leadership’s insight in strategic planning as well as the solidarity, attachment and efforts of the staff.This is shown by the consolidated financial ratios over the years as follows: 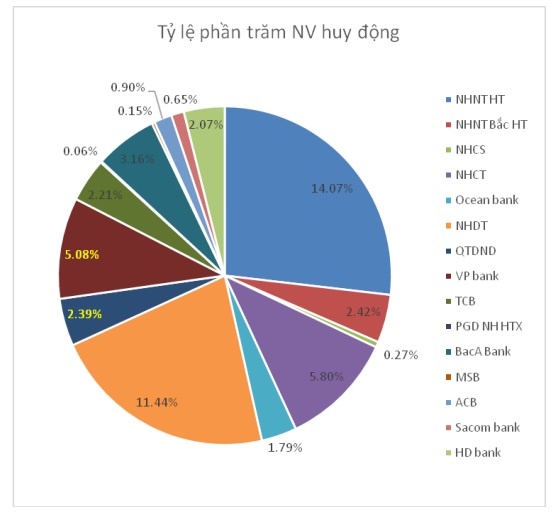 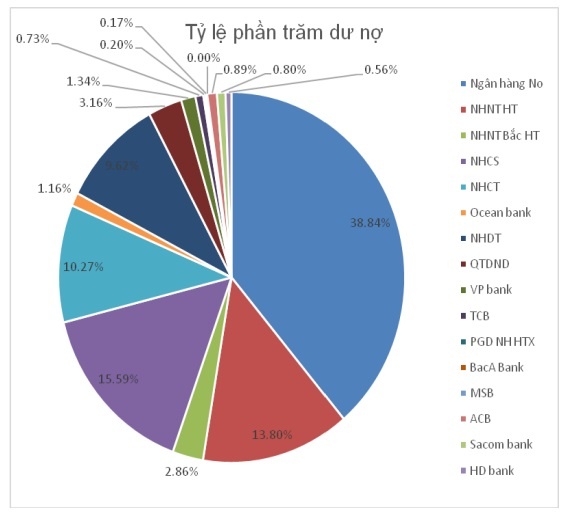 Figure 2.1: Percentage of mobilized capital and outstanding loans in Ha Tinh province in 2013

(Source: Report on percentage of mobilized capital and outstanding loans in Ha Tinh province at the end of 2013 of Ha Tinh State Bank on December 31, 2013).

VPBank Ha Tinh Branch is a joint stock commercial bank in Ha Tinh province operating with the mission of “acting for the dreams” of customers, turning customers’ dreams into reality with our services. Bank. The bank’s mission is built from the following elements: Professionalism, Dedication, Differentiation, and Simplicity. Towards a long-term vision, VPBank is determined to promote the image of a bank that always tries its best to serve customers with a friendly attitude and fastest speed.

2.2.2 Analysis of the external environment

– Natural environment: Ha Tinh is a province in the central strip of land, located in the North Central tourist area, bordering Nghe An province to the north, Quang Binh province to the south, and the Democratic Republic of the country to the west. Laotian people, the East borders the East Sea with a coastline of 137 km. Natural land area of ​​6,019 km2, population 1,289,058 people (in 2005), 127 km of National Highway 1A, 87 km of Ho Chi Minh road and 70 km of North-South railway running along North-South direction, with National Highway Highway 8A runs to Laos through Cau Treo international border gate with a length of 85 km, National Highway 12 is 55 km long from Vung Ang port through Quang Binh to Cha Lo border gate to Laos and Northeast Thailand.

Ha Tinh has 14 large and small rivers and many lakes which are very favorable for the development of agriculture, forestry and fishery. The average annual temperature is 23.7ºC. Road, railway and waterway traffic are all convenient with National Highway 1A and North-South railway running through the province. In addition, Ha Tinh also has 137 km of coastline with many large ports and estuaries along with a fairly good traffic system, very convenient for cultural exchanges and socio-economic development Ha Tinh province also has Cau Treo border gate. convenient for exchange with Laos, Thailand.

+ Favorable factors from the economic and social environment

– The economy is growing fast, the income of the people is increasing

With the economy rapidly shifting towards industrialization and modernization, there are more and more large projects in Ha Tinh province. Especially with advantages in the fields of mining, industry, trade and services, Ha Tinh increasingly attracts many large investors with billions of dollars in capital. Especially in Ha Tinh, the project of Iron and Steel Complex and Son Duong Deep Water Port, invested and built by FORMOSA Group, is built on the basis of geographical advantages of Son Duong deep water port and Vung Ang Economic Zone in District 1. Ky Anh – Ha Tinh province is one of the key projects, a push to develop the economy – trade, services and especially the mining industry of the province. The project is applied technology and advanced equipment in the world for iron smelting, steel making and steel rolling,at the same time apply the best technical solutions for energy saving and environmental protection. This will be the largest deep-water closed steel factory in Southeast Asia, with a capacity of 22 million tons of steel per year, 1500 Megawatts of thermal power, 11 wharfs in turn coming into operation. in 2014-2015. Total investment in phase I is expected to be about 10 billion USD. Therefore, the need for investment capital of the province in the period 2011-2020 is very large.

– Demand for retail banking products and services supply Ha Tinh is a province with a relatively large population, moreover, with the economic restructuring, industrial parks, especially in Ky district.

The UK with the Iron and Steel Complex and Son Duong Deep Water Port invested by FORMOSA Group attracts hundreds of thousands of workers from all over the country and abroad to work. Therefore, developing individual customers for VPBank Also a huge advantage. Meanwhile, it can be said that retail is VPBank’s strength, and this is also the strategy that VPBank is aiming for. When the economy develops, people are more and more crowded, people’s income is increasing, the needs for housing, consumption, savings and payment are great. Therefore, the demand for retail banking products and services is growing day by day

The demand for foreign currency trading for import and export, international payment as well as the demand for temporary capital withdrawal is increasing. The number of customers using ATM cards and accompanying personal services such as withdrawing cash, paying for electricity, water, and telephone bills, paying taxes, and paying for goods is increasing. It can be said that Ha Tinh is a potential new area in the development of banking services.

+ Adverse factors from the economic and social environment

In Ha Tinh, the capital demand for investment and production is quite large, but the mobilized capital is still limited. The self-financing capacity of enterprises is still low. In the state-owned economy, bank loans account for a large proportion, and operational efficiency is not high. The non-state economy is still fragmented and small, spontaneous in nature, lacking in large-scale and methodical enterprises. Some foreign-invested enterprises have a large registered investment capital but slow implementation.

The level of development among regions in the province is not uniform, between cities and districts. The amount of investment capital mainly focuses on urban areas and industrial zones, such as Vung Ang industrial park in Ky Anh district, Ha Tinh city and Thach Ha district. The remaining districts and towns have economic activities mainly based on agriculture, forestry, and handicrafts with low income.

Inadequate investment in the agro-forestry economic sector. The economic structure is being transformed, but the pace of transformation is still slow and uneven among districts, towns and cities. Economic organization in the form of family, spontaneous production, low level of mechanization, low productivity.

Our country is developing a socialist-oriented market economy. The legal system is gradually improving, creating conditions for domestic and foreign enterprises to expand investment in production and business. Operating the economy according to the law is contributing to creating a favorable business environment. The economic laws have provided the norm to deal with the issues of enterprises, economic contracts, commercial relations, legal entities, litigation, etc. However, the current system of legal documents still has many problems. incomplete points, not in accordance with reality. Some newly developed laws lack clear definitions. There are many general regulatory issues depending on the application of the judicial authorities. There are many provisions in the Vietnamese law that do not correspond to the laws of other countries, international practices and laws.

In Ha Tinh, there is a stable political system, the law is quite public and transparent, the living environment is safe and secure. population is not really high, especially for the people in the districts, so the accessibility level of the people is still limited.

Joining the WTO opens up opportunities but also poses urgent requirements for domestic banks to increase learning from experience, improve technology level and bank governance. High technology with many advantages is being applied more and more in the field of business, especially in service providers related to direct transactions with customers such as banks, securities brokers, etc. securities, …

In Ha Tinh province, people still mainly apply the form of face-to-face transaction service between customers and teller (traditional banking transaction). Due to the familiar habits of the people in the central region, which have a “sure” characteristic, it is also due to limitations in the application of modern technology in people’s banking transactions such as through the Internet, mobile phones, etc. Banks need to consider a strategy of applying modern technology to help customers save time, effort and money and avoid bureaucratic, authoritarian, and apathetic attitudes of service staff in transactions. Translate.

– Competitors: Although Ha Tinh province is one of the poorest provinces of the country, currently there are quite a few banks in Ha Tinh that have engaged in business activities. However, the top competitors of VPBank Ha Tinh are: Bank for Foreign Trade, Bank for Industry and Trade, Bank for Agriculture and Rural Development, Bank for Investment and Development.

– Customers: Customers are the most important part of the bank, loyal customers are a great advantage for the bank. Customer loyalty is built by satisfying customer needs.

Therefore, banks must have a flexible customer strategy while still ensuring their profits. For example, if customers use many products and services of a bank, they can apply this product at a lower price than other banks, but in return, they can raise the price of other products.

Currently, because there are too many banks to offer customers with preferential policies, in addition to keeping existing customers, banks must regularly search and market new customers and attract customers from banks. other than your dealings.

– Supplier : For banks, the supplier of capital to the bank is very important. In the condition that mobilizing interest rates from joint stock commercial banks are always higher than VPBank Ha Tinh, it is necessary to promote the brand and improve service quality to attract deposits.