Table 4.11 Results of EFA analysis of all variables 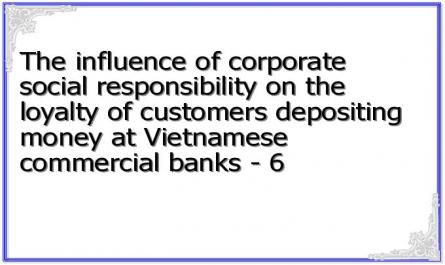 First, KMO=.934  >  .5 so EFA analysis is appropriate for real data. Bartlett test has statistical significance (Sig=.000 < .005) so the variables are correlated with each other in the population.

Second, the EFA results analyzed 6 factors and the Eigenvalues ​​are all greater than 1 (the smallest coefficient is 1.157), thus retaining all 6 factors as the original analysis, no need to reduce the set of factors. . The total variance extracted is 65.758% (greater than 50%), that is, 65.758% of the variation of the factors is explained by the observed variable.

Third, the factor loading coefficients of the 6 download factors are all greater than 0.5 (the lowest is 0.587), showing that the study has achieved practical significance.

Fourth, the difference between the loading coefficients among the factors is at least 0.3 ( see Appendix 7),  satisfying the condition for each observed variable to exist in the centralized model explaining for a single factor.

With the above indicators, it can be concluded that the factor analysis model has complete practical significance, high explanatory capacity for reality, and forms 6 similar meaningful factors in the proposed research model. . Six factors including 28 observed variables were kept for CFA analysis in the next step.

The author conducts confirmatory factor analysis for 6 concepts in the research, and uses 5 criteria in the process of testing the scale. First: evaluate the relevance of the data to reality. Second: aggregate reliability and total variance extracted. Third: test discriminant validity. Fourth: verify the convergence value of the scale. Finally, check the unidirectionality of the model. The first CFA results are presented as shown in Figure 4.3: 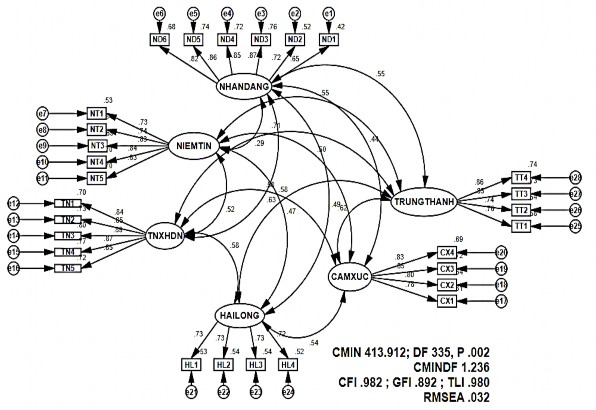 The analysis results show that, with Chi-square test, the model has no significant difference at the 5% level (P=.002). However, other conformity measures were satisfactory (CMIN/DF= 1.236; GFI=.892; TLI =.980; CFI = .982; RMSEA = 0.032). The CMIN/DF, TLI and CFI indexes are all at very good acceptance levels, while the GFI indexes are only in the temporarily acceptable zone. The normalized weights λ of the measured variables are quite high, with no index lower than 0.5 (the lowest index is .652 of the  ND1 variable)  and reach the level of statistical significance. The RMSEA index = .032 presents very good results, demonstrating high compatibility with market data.

(MI=5.732), e2 and e3 (MI=4.787). The significance of the MI index is that when these errors are hooked together, the Chi-squared will decrease by exactly the same amount as MI. As a result the model will be improved. The results of the second CFA analysis after hooking the errors in the normalized model are shown in  Figure 4.4. 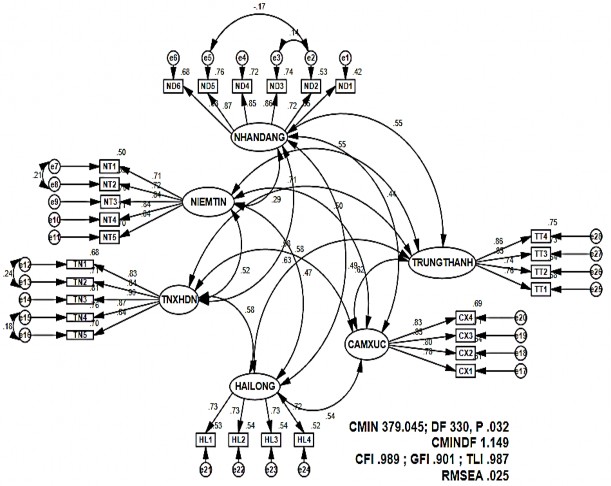 Figure 4.4 The critical model after joining errors has a large correlation coefficient

First,  test the degree of conformity with reality. The model in Figure 4.4 after error matching has a large MI index that has improved compared to the model in Figure 4.3. Although, P has increased significantly (P=.032), the Chi-squared test is still not significant at the 5% level. However, the indices CFI=.989, GFI=.901, TLI=.987 show very good results, all

all indexes are greater than 0.9 as required. The index RMSEA=.025, CMIN/DF=1,149 with a sample size of 236 demonstrates a very high degree of agreement between the data and reality.

Table 4.13 Indicators for testing the reliability of the scale

Calculation results from table 4.13 show that all concepts have aggregate reliability and total extracted variance is greater than 50% (lowest is 82% and 53.2% respectively), so the indexes satisfy all requirements. required conditions. Besides, the concepts in the model also have composite reliability ≥ Cronbach's Alpha value. Combining the values, the scales in the research model have achieved reliability.

Third,  evaluate the discriminant value. In this study, the scales built do not include many component concepts. Therefore, the author only evaluates the external discriminant value, that is, between external concepts. From the correlation coefficient between variables (r), calculate the standard deviation (SE), CR and Pvalue according to the formulas: SE=SQRT((1-r 2 )/(n-2)) ; CR=(1-r)/SE; P_value

The correlation coefficients and standard deviation are both different from 1 and have statistical significance at 1% significance level, so the research concepts achieve discriminant validity.

Fourth,  evaluate the convergence value of the scale . The scale reaches the convergent value when the observed variables of a research concept have high correlation or high standardized λ (≥0.5) and reach statistical significance (P < 0.05). Observing from the critical model in Figure 4.4, we see that the normalization coefficients of the observed variables are all greater than .5 (the lowest coefficient is .65) and these coefficients are statistically significant P= .000 (see  Appendix 9 ) so it can be concluded that the scales used in the model reach the convergent value. 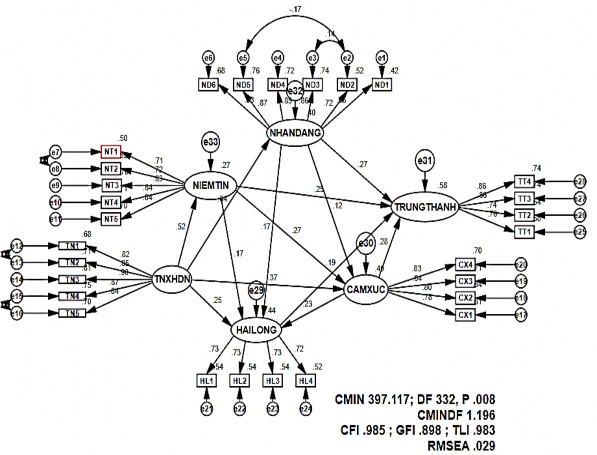 Bootstrap is an iterative alternative sampling method where the initial template acts as the crowd. In order to evaluate the reliability of the estimates, in quantitative research methods by sampling method, we usually have to divide the sample into two subsamples: a part used to estimate model parameters and part for re-evaluation. Or maybe re-evaluate the study

by another sample. However, these methods are time-consuming and costly because the requirements in SEM analysis require large sample sizes (Nguyen Khanh Duy, 2009). In such cases, Bootstrap is the right alternative. This study uses the Bootstrap method with the number of repeated observations N = 500. AMOS software will now select 500 observations according to the substitution method from the crowd of n=236 observations.

The results of testing the research hypotheses are presented in Table 4.16:

Considering the consequences of CSR, CSR has the strongest direct influence on customer identification, followed by trust and then on customer emotions and then satisfaction. The normalized estimation coefficients are .636, .522, .369 and ., respectively

.255. And these factors continue to directly affect customer loyalty. In which, emotion has the most influence (estimated value is .284), followed by customer identification (.269), satisfaction (.255) and ultimately customer trust (.245).

Table 4.17 Results of direct and indirect influence of research hypotheses

(Source: author's calculation from Excel, details are in Appendix 12)

Haven't found a relationship yet

Independently explains 57.9% of the change in the dependent variable which is the loyalty of depositing customers. In other words, if you ask depositors that if customers feel that this bank does a good job of CSR, they will continue to stick with the bank, the answer is no. But through CSR, customers' trust, satisfaction, emotions and identity will be changed. That changes their allegiance.

Multi-group structural analysis method to compare the research model according to certain groups of a qualitative variable. Multi-group analysis gives us the results whether there is a difference in customer loyalty for different groups in terms of age, gender, etc. The author will divide it into two models: Variability model and model. immutable (partial). In the variable model, the parameters estimated in each model of the groups are not constrained. In the invariant model, the measure component is not constrained, but the relationships between the concepts in the constrained research model are equally valid for all groups. Chi-square test was used to compare the two models. If the chi-square test is to show that there is no difference between the invariant model and the variable model (P-value > α, where α is the possible significance level of 1%, 5%, 10%) then the invariant model will be chosen (with higher degrees of freedom). Conversely, if the Chi-square difference is significant between the two models (P-value

<  α), then choose the variable model with higher compatibility (Nguyen Khanh Duy, 2009). In this study, the author conducts a multi-group analysis based on (1) customer characteristics (gender, service time, income), (2) banking and product and service characteristics ( nature of bank ownership, types of products and services).

4.5.6.1 Analysis of multi-group model according to customer characteristics

Interviewees can be male or female. The SEM results of the variable and invariant models are detailed in  Appendix 13 . The Chi-squared difference (  2 ) and degrees of freedom of the two models are 15,283 and 13, respectively (Table 4.18). Level

The difference of these two models is not significant (p=0.290 > 0.05), so the partial invariant model is chosen.

Partially invariant model is chosen (with higher degrees of freedom). It also means the relationship between the concepts: corporate social responsibility, trust, customer satisfaction, emotions, customer identification and customer loyalty depositing money at commercial banks. VN in Ho Chi Minh City is not different between different customer groups in terms of gender. This is also easily explained, because deposit products in Vietnam are mostly not only for one gender, either male or female, but are aimed at both male and female customer groups. Therefore, there will be no difference in perception between men and women at 5% significance level.

The time of using the deposit service is divided into 2 groups: 3 years or less and over 3 years. The Chi-squared difference (  2 ) and the coefficients of freedom of the two models are 20,526 and 13, respectively (Table 4.19). The difference of these two models is not significant (p=0.083 > 0.05), so the partial invariant model is chosen. However, if using the significance level of 10%, the selected variable model means that there is a difference in the influence of CSR on the loyalty of customers depositing at banks.

Vietnamese trade. This can also be easily explained because some customers choose to save money at commercial banks with long terms such as 36 months, 60 months. Sometimes, through the transaction time, they feel dissatisfied and intend to switch banks, but they can't immediately close the savings account at the bank they deal with, so the relationship time is long. Even with the bank, it is not possible to confirm that they are loyal customers with the deposit service at that bank.

The Chi-squared difference (  2 ) and degrees of freedom of the two models are 15,504 and 13, respectively (Table 4.20). The difference of these two models is not significant (p=0.277 > 0.05), so the partial invariant model is chosen. Thus, the partial invariant model is chosen, i.e. the relationship between the concepts: corporate social responsibility, trust, satisfaction, customer emotions, customer identity and loyalty of customers depositing money at Vietnamese commercial banks in Ho Chi Minh City is not different among customers with different incomes.

4.5.6.2 Analysis of multi-group model according to characteristics and products and services of banks

According to the characteristics of commercial banks, in this study the author divided into 2 groups: