First, the author performs regression according to Pooled model to FEM and REM. The result of choosing the most suitable model for this topic is FEM.

The first estimator performed is OLS, and finally the most suitable method is selected, which is GLS. Also fixed the errors of variable variance and autocorrelation.

The most reliable regression model results are as follows:

Ownership structure has an impact on the business performance of commercial banks. In there:

- The ratio of natural person ownership (IOE) was not found to correlate with the ratio of return after tax to total assets (ROA). 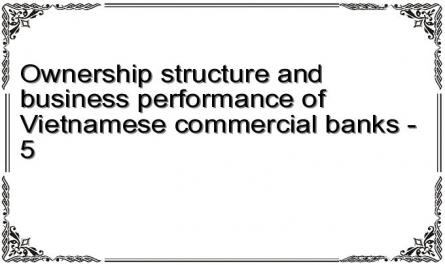 The research results are as follows:

For state ownership, the study shows evidence of the negative impact of state ownership on business performance of Vietnamese commercial banks. Specifically: In terms of other factors unchanged, at the 99% significance level, when the State ownership rate increases by 1%, the ratio of profit after tax to total assets decreases by 0.403% on average. This result is consistent with the political objective theory of Shleifer and Vishny (1997), Boycko et al. (1996), the agency cost theory of Jensen & Meckling (1976) and empirical studies by such as Barth et al (2004), La Porta et al (2002), Hasan and Marton (2003), Jemric and Vajcic (2002), Weill (2003), Micco et al (2007), Lin and Zhang (2009), Cornett et al (2010). This result may reflect the reality in Vietnam when state-owned commercial banks have to perform a number of political tasks for the Government, not simply business tasks with the goal of maximizing profits. . In addition, due to the incomplete and tight legal system, having state ownership also increases agency costs like developing and emerging countries in Eastern Europe and China.

For foreign ownership, the study shows evidence of the positive impact of foreign ownership on business performance of Vietnamese commercial banks. Specifically: In terms of other factors unchanged, at the 95% significance level, when the foreign ownership ratio increases by 1%, the ratio of profit after tax to total assets increases on average by 0.642%. This result is consistent with the general form of the global advantage theory of Buch (1997), information asymmetry theory of Gillan and Starks (2003) and Ferreira and Matos (2008) and others. The empirical study of Denis and McConnell (2003), Lizal and Svejnar (2003), Mathieson and Schinasi (2000), Claessens et al. (2001), Hasan and Marton (2003), Nikiel and Opiela (2002), Majnoni et al (2003), Demirguc-Kunt and Huizinga (1999), Bonin et al (2005), Micco et al (2007), Berger et al (2008), Rokhim and Susanto (2013), Jemric and Vajcic (2002), Weill (2003), Grigorian and Manole (2006), Yildirim and Philippatos (2007). This result is consistent with emerging market conditions like Vietnam when foreign investors have transferred technology, improved product quality, and enhanced supervision, reducing both operational and agency costs. and ultimately improve business performance.

For private ownership, the author has not found a strong relationship with return on total assets.

From the research results analyzed above, the study proposes a number of policy implications for managers of commercial banks and state management agencies as follows:

of foreign investors at a domestic credit institution must not exceed 30%.

In order to further improve the business performance of commercial banks, the Government needs to allow the increase of foreign ownership ratio in commercial banks to a maximum of 50%. This is also one of the solutions to increase financial resources for commercial banks in Vietnam and will help the restructuring of the banking system in the next period be more favorable.

But the model of other countries in the world has very few commercial banks that the State owns as high as Vietnam. Normally, the State only owns development banks and policy banks, while commercial banks are in charge of the private sector. Meanwhile, Vietnam is one of the countries with a high rate of State ownership, there are commercial banks with a state ownership rate of 95% as mentioned above. This does not create flexibility in competition and efficiency in management, so it needs to be researched and reduced further.

5.2.3. There should be a suitable roadmap in expanding foreign ownership in Vietnamese commercial banks

The benefits of business performance from increasing foreign ownership in Vietnamese commercial banks have been clarified. However, Vietnam also needs to pay attention to the appropriate implementation to bring the highest efficiency to society.

As we all know, the banking industry is the lifeblood of the economic candle. Every country

Each country has different institutions and development goals, each country has different conditions and resources to develop the country. When Vietnam is in the process of opening up for integration, its economic potential is still weak, the law has not been perfected, and the management level is still weak, Vietnam needs to be careful in every step to develop the country. be comprehensive, not deviating from the set development goals.

When foreign investors occupy important positions in domestic commercial banks, it is likely to affect the policies and operations of the Vietnamese banking industry. This is especially dangerous when the legal system is not yet complete, Vietnam does not exclude the possibility that unrighteous foreign investors will drive the Vietnamese banking industry in a direction that is not in line with Vietnam's development goals. Male. On the other hand, domestic investors are still weak in capital and management skills, if Vietnam rushes to increase the foreign ownership ratio, it will lead to domestic investors not competing again, losing right at home. . Therefore, the Government needs to have a roadmap to increase the foreign ownership ratio appropriately according to the legal conditions and capacity of domestic investors for comprehensive and sustainable social development.

The State needs to step up the improvement of legislation in the banking industry, have strong enough sanctions to deter unrighteous investors, and protect genuine domestic and foreign investors. Strengthen supervision to ensure the healthy operation of the banking industry in accordance with market rules and laws to attract domestic and foreign investors. Pay special attention to the ownership structure of commercial banks, there are regulations on reporting, checking and monitoring regularly on the ownership structure at commercial banks to prevent timely the situation where the ownership structure is skewed towards a group of people who have the same common ground. The benefits that lead to manipulation, credit backyard, and increased agency costs will reduce the business performance of commercial banks, not reflecting reality.

In order to apply Basel II standards, the State Bank of Vietnam issued Circular No. 41/2016/TT-SBV stipulating the capital adequacy ratio for credit institutions (the standard method of Basel II). II) and Circular No. 13/2018/TT-NHNN stipulating the internal control system of commercial banks.

Commercial banks need to actively apply the two Circulars above to catch up with international safety standards. Thereby, it will enhance transparency, reduce risks, and reduce agency costs to attract investors. From there, there will be conditions to improve technology, improve management level and product quality, and finally improve business performance.

5.2.6. Improve management level, technology and quality of products and services

Management level, technology and product quality are closely related. Having a high level of management will facilitate the application of new and advanced technologies and thereby create higher quality products and services. On the contrary, when the quality of products and services is high, it will have a competitive advantage in the market, earn higher profits, attract more investors, and ultimately create favorable conditions.

5.3. Limitations of the topic

The author conducts the research within the scope of the data collected from many reliable data sources. However, due to objective and subjective conditions, the study has some limitations as follows:

Firstly,  because Vietnam has just opened for integration, commercial banks have developed over time in a short time, the number of commercial banks is not much, the reports of commercial banks are not standardized and incomplete, so the collected data sample not big. This has led to the inexplicability of the relationship of some types of ownership (such as natural person ownership, organizational ownership, cross ownership) to operational efficiency.

Third,  about the research model, the author uses multiple linear regression model. It is possible that the ownership structure is more suitable for another type of model that the author has not tested.

On the basis of the above limitations, the author proposes a number of further research directions in order to strengthen and contribute more to academic and empirical research on the correlation between ownership structure and business performance of commercial banks. Vietnam as follows:

Firstly,  the following study continues to update and expand the data sample to improve statistical significance, to find the relationship of other types of ownership with business performance of Vietnamese commercial banks.

Second,  when the Government relaxes or removes the constraints on ownership ratio, it is necessary to further study whether the model is still suitable or not.

Third,  Continue to study other models to see if they are more suitable? Is the statistical significance of ownership types better?

Fourth,  conduct research towards the impact of business efficiency on the ownership structure of Vietnamese commercial banks.