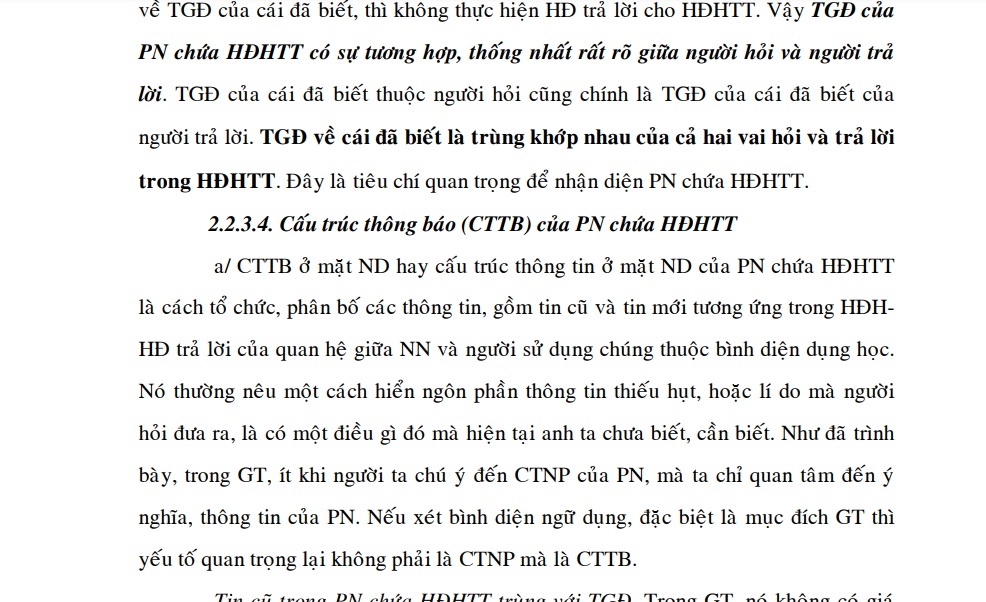 Fourth, besides giving some modal expressions that limit the modal frame for PN purposes at the sentence level, we also raise the issue of the compatibility between the explicit modal frame of PN and ND purposes. The question clause in the PNH contains the information system.

The consistent compatibility with the modal element of the propositional ND is that both roles are directed towards a situation, a homogenous segment of objective reality, with identical relations, with a spatial and temporal frame of reference. space in the same coordinate system.

The facts given by the speaker are specified with a definite coordinate and the respondent also understands and answers within that specified coordinate relatively uniformly, in order to ensure that the information provided by the listener is correct. what the questioner needs, new information is replaced by the unknown. The situation “he said chicken, she said duck” rarely happens, except in two cases: either the listener is inadvertent, or the person is deaf; or the listener intentionally deviates from what is being asked to contain another YNH.

2.2.3. The pragmatic aspect of PN contains direct questioning. We stand on the PN-hierarchy point of view, considering the sentence in the relationship between the PN and the recipient of the sentence, on the issue: context; object projection; CEO; CTTB; CTLC.

2.2.3.1. The contextual context in the PN contains the operating system

Projection, or the basis, is just the relationship between the PNH and the parts that make up its context. Thanks to the object projection, the new language is associated with the context. Projection of objects is not the work of the state itself but of people. Searle considered object projection as an activity in the activity that creates propositions as the semantic core for PN.

1. The role of the speaker (performer of the first object-projecting activity) in the object projection of the cognitive system: the questioner must aim at an extra-real situation, must place it in a frame of reference in space and time. determination… creates the definiteness, clarity, and clarity in the ND propositions. That reference helps the listener to locate and identify events related to the real-life situation that the questioner wants to mention.

Telling the questioner to perform the first object projection activity is because when creating the PNH, the questioner both identifies and locates himself explicitly, performs the operation, and assigns the entire system to the respondent. that specified coordinates. Therefore, the components that have the effect of determining the reference and positioning in the PNH are very important. When the reference instructions are not clear, the listener cannot answer, or the response is skewed, or there will be a period of re-correction of the PNH in order to clearly define the frame of reference. Example (10 ):

M: How much does this chicken cost per pound?

B: Which chicken do you ask?

M: I asked the chicken on the floor!

2. The respondent’s role in the presentation of the information system is equally important as the speaker. Because we say, the speaker is the one who performs the contract of objectivity, which does not mean that the listener does not perform the contract of objectivity, or is completely innocent, passive, and has no role in the projection of objects. In the cognitive system, the listener is forced to accept the entire projection of clearly visible objects on the surface of the PN, to ensure that the information he provides matches the coordinates of the object projection of the situation given by the speaker.

3. The object projection of the PN containing the OST is for the respondent to know what the questioner is talking about, ask about something explicitly. To ask something is to establish a certain “theory” for the referenced thing. Except for the case where the theory is known in the foreword, the cases of single standing projection expressions are not informative and not yet made up of sentences. Like “where is the cat” if not a PN is just a floating expression.

The questioner, when presenting the PN, implicitly acknowledged that the CEOs were right about the known and only asked the unknown. When creating a PNH containing the information system, the CEO expresses the questioner’s confidence in the segment of reality reflected in the operating system and based on the CEO is considered true, real and reasonable because it is a necessary condition to create an explicit meaning.

On the other hand, the CEO of the unknown also has a relationship with the known and is not the CEO of the completely unknown. The CEO does not know, and at the same time, to a certain extent, is also partly known, and definitely has a relationship with the CEO about the known. If one is completely ignorant of the General Director of the known, then he cannot perform the PN containing the TT. https://tailieuthamkhao.com

The respondent gives the information system the following conditions: firstly, he has completely accepted the CEOs as known contained in the operating system and when answering the unknown of PNH, it is considered that the listener has accepted that the CEO of PNH is correct. It is impossible to have a case that both opposes the CEO of PNH and responds to PNH at the same time, because it is logically contradictory. Like (11): How much does this cost? B: I’m not selling, and I’m selling for 5000! (-).

a/ The structure of information on the ND side or the information structure on the ND side of the PN containing the information system is the way to organize and distribute information, including old and new news respectively in the response operating system of the relationship between the state and the user. they are pragmatic. It often explicitly states that the missing piece of information, or the reason the questioner gives, is that there is something he doesn’t currently know, needs to know. As mentioned, in GT, people rarely pay attention to the CTNP of the PN, but we are only interested in the meaning and information of the PN. In terms of pragmatics, especially for GT purposes, the important factor is not the CTNP but the CTTB.

b. The basis for determining the CTTB of the PN containing the OST

The purpose of the question is to get the answer, to fill in the missing information, on the contrary, the purpose of the answer is to clarify the unknown, the contradiction between old and new information is usually resolved well. satisfactorily, thoroughly. As for the traffic management system, which has other purposes, PN responded with less dependence.

Third, context is an important basis for determining information about CTTB. In some cases, the structure of the surface meaning of PNH does not allow us to identify old and new news, so we have to rely on the specific GT context. Example (12), B: How about you?; M: Give me 3 pounds too! (If we don’t rely on context, we can’t tell what object this PNH is asking about in objective reality.

Context (12): the place where GT takes place is at the market; the GT object is two people buying and selling, this context allows us to understand there is also a third person, the second buyer; ND that B wants to ask M is how many pounds the buyer wants to buy… Thanks to the context, we can know the old news “how many pounds”; breaking news” the amount of 3 pounds is news. So ND coincides with CEO, with old news.

Firstly, the part known is old news, is also the CEO of the known, at the same time is the fulcrum of the focus of the question, is the basis for placing PNH, is the premise of the CTTB. Because it is only the premise of the CTTB, the old news is implicitly recognized, of course, there is no need to be explicit anymore. So, in the information system, the old way of distributing information does not need to be explicitly stated, and PNH – PN answers.

Secondly, the part of unknown and new information is the focus of the question, the request posed to the respondent, and the main element in the formulary. Since it is the main factor, it must be brought up to be asked and it is expressed explicitly (telling the respondents what they want). Thus, in information systems, the distribution of new information must be explicitly stated, otherwise it must be context-based. The news in PN’s CTTB containing OSH is not entirely new. Because the CEO of the unknown is closely related and must be based on the CEO of the known to exist.

2.3.1. The learning aspect of indirect questioning