Referring to the problem of PNH, Vietnamese grammar books from the traditional point of view often identify PNH according to two main criteria: speaking purpose, having its own signs of questioning state, or a combination of the two above criteria. Up to now, almost all traditional Vietnamese grammar books have devoted to PNH a certain number of pages, usually listing question words and classifying PNH mainly based on the criterion of HT as the main (most of the ways). All classifications are based on the structure and grammatical function of question words or words with specific signs of the question state), and at the same time classify sentences according to the purpose of speech. 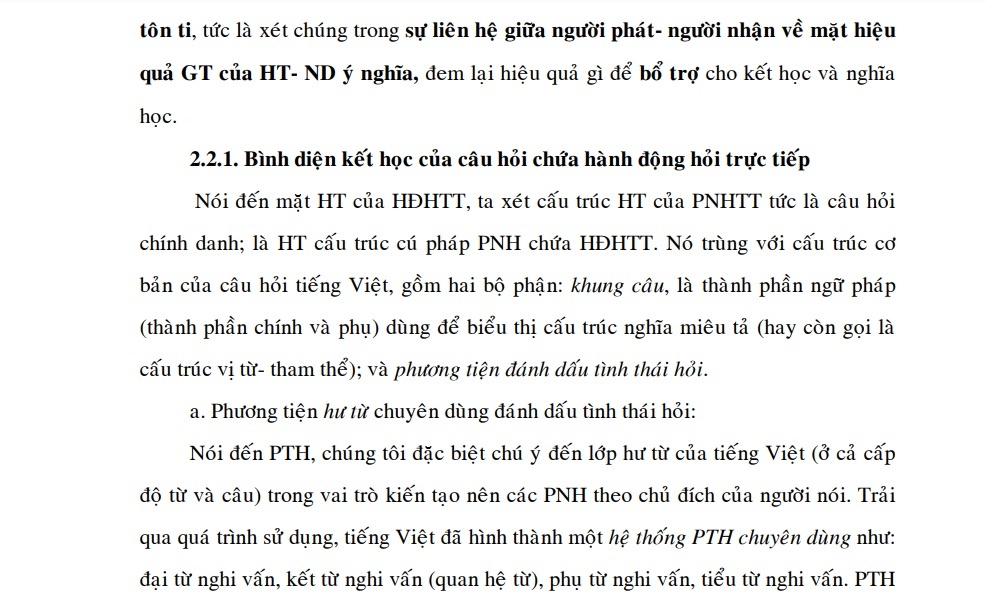 We mainly present the problem of the correspondence between the three levels of grammar, semantics and pragmatics in the operating system under the MB speech event. These three aspects are temporarily separated for analysis, but in fact they are closely linked, have a dialectical relationship, complement and support each other. All research in agriculture, if the three aspects are separated clearly without seeing the interrelationship, will lead to lameness and one-sidedness. In the end, PNH contains OS from the morphological-syntactic point of view, that is, consider them in relation to the NN system in terms of HT, and at the same time bring about any effect to supplement semantics and pragmatics.

Speaking of semantics, PNH contains the operating system from the semantic-relational point of view, that is, considering them in relation to the objective real world in terms of ND meaning and at the same time bringing about any effect to supplement the conclusion. and pragmatics. In pragmatics, PNH contains OS from the point of view of PN – hierarchy, that is to say, consider them in the relationship between the transmitter and the receiver in terms of the effectiveness of the value of the HT – ND meaning, what effect does it bring to complement epistemology and semantics.

2.2.1. The concluding aspect of the question contains the act of asking directly

Speaking of the HT side of the Comprehension System, we consider the HT structure of the Computational Literature, that is, the legitimate question; is a PNH syntactic structure containing an operating system. It coincides with the basic structure of a Vietnamese question, consisting of two parts: the sentence frame, which is a grammatical component (main and minor components) used to express the descriptive meaning structure (also known as the predicate structure). word- reference); and means of marking question states.

a. Means of damage from special-use words to mark the question state:

Speaking of PTH, we pay special attention to the class of Vietnamese words (at both word and sentence level) in the role of creating PNHs according to the speaker’s intention. Through the process of use, Vietnamese has formed a system of specialized grammar such as: interrogative pronouns, interrogative conjunctions (word relations), interrogative adverbs, interrogative particles. PTH combined with function and meaning, there are three types: General PNH (total PNH); Specialized PNH (Partial PNH); Limited PNH (Optional PNH).

Fourth, they often have a general meaning, corresponding to a certain category of general semantic logic: asking about the entity: who, what, which…; about characteristics: how, how, what to do…; quantity, ordinal number: how much, how many…; location, direction: where, where…; time: ever, …; cause: why, why, why… [163] PNH uses interrogative auxiliary pairs often used to express the requirement to choose one of two possibilities of affirmation or negation. identify and inquire about the existence of an entity feature.

The structure of question choices can appear in different grammatical positions in the sentence and sometimes in the position of the modal element of the central predicate (eg (7): Do you still want to buy it or not? ) There is also a form of PNH that combines a pair of interrogative adjectives with an interrogative term in the form: “Is there an A, or B”, (for example (8) : Do you want to sell me this item or are you afraid? pit?). PNH uses interrogative particles that often appear at the end of a sentence: ah, uh, uh…, there are also some combinations of particles “or is”, “maybe” appear at the beginning of the sentence. PNH using interrogative particles containing modals usually does not appear much, because modal particles often express modal meanings related to the matter of sincerity or insincerity.

b. Means of intonation combined with context used to mark the question state.

The problems of assigning PTHs above are only relative, in fact, it is possible to use this PTH but perform other functions.

2.2.2. The semantic aspect of PNH contains the act of asking directly

Semantics are the soul of PNH and OS. Talking about the semantics of PNH containing the cognitive system, is referring to the structure of the explicit meaning in the PN containing the information system. According to M.A.K.

2.2.2.1.Descriptive meaning of the content of the query clause of the PN containing the PN

According to Halliday” The descriptive meaning of a sentence is the meaning component that reflects the thing (thing, thing, or phenomenon) mentioned in the sentence, it can be evaluated as true or false and can be checked. has a relationship with the syntactic structure of the sentence when considering its expressed system” [114].

Among the semantic components in the PNH containing the information system, the descriptive meaning component is the part that has the closest relationship with the syntactic structure of the PNH. In this relationship, the semantic roles of entities participating in the event mentioned in PNH help in determining the meaning of sentence components. On the contrary, the syntactic structure helps to express the speaker’s view of things and contributes to the identification of the types of objects that reflect the descriptive meaning of the sentence.

Halliday said that the descriptive meaning structure of a sentence includes determining the characteristic structure – the object and the types of object or characteristic structure/relationship – meaning role; or in the terms of Simon Dik (1986) is a predicate-argument structure. In terms of reflecting things (things), sentences are used to describe things. Things, events, phenomena are reflected in sentences through human perception called things. The core of things is the predicator expressed by verbs and adjectives. The function of the predicate is to be at the center of the relationship between the people or things in question.

The person or thing that participates in creating that thing is called the argument.

– The case of the PN containing the cognitive system is to talk about a certain situation and direct the respondent to the same fact, or both towards a segment of objective reality, a single event that the speaker wants. ask.

– The question statement of the PN containing the PN must contain exactly the unknown and unknown points that need to be clarified in the PN’s answer. Feature structure/relationship-role means the meaningful structure of the thing, including dynamic or static features or relations and the entities participating in those features and relationships are collectively known as entities. role meaning. So, finding out the descriptive meaning structure of the PNH containing the information system is to learn the predicate structure – the argument of the explicit meaning structure, including the question predicate and the arguments surrounding the question predicate: the question subject argument, the PN’s interrogation object argument, the PN’s inquired object argument contains the information system.

– Asking predicate of PN containing information system are verbs, adjectives related to asking, used directly in PNH with the general meaning of saying what you want to others, with the request to answer a question. something, or ask to know.

-The argument that the recipient of the PN’s query contains the information system (Sp2) is that when receiving the OS, because of politeness, SP2 is naturally bound, responsible for answering, providing information in an explicit way to meet the demand. information that the questioner wants to know

-The object argument of the PN containing the information system is what Sp1 sincerely wants Sp2 to perform the response contract, especially the operating system in MB which is related to Sp1 and Sp2 both in terms of rights and obligations. The following example (9) has the predicate ‘ask’ with three arguments:

I asked you about this bike how much?

2.2.2.2. The meaning of the content of the PN’s question clause contains the OSTT

That is the meaningful component related to the modal element, which has an evaluative and expressive meaning in the explicit modal meaning structure of the PN containing the cognitive system. The modal meaning of the question clause is evaluated at several levels:

2/ At the grammatical level: firstly, we pay attention to the true effect of the verb in the function of creating the modal meaning of the PNHs. That is the meaning of the explicit state of the PT system containing the information system and the meaning of the explicit state of the PNH proposition. Second, we pay attention to the explicit modal frame structure of the purpose of PNH, which is to find out the meaningful characteristics of modal predicates and the elements surrounding the modal predicate: modal subject element, the object element receives and evaluates the state, the modality component of the propositional sentence.

On the contrary, the listener who expresses the modal predicate in the PN containing the PN contains the response activity to respond to the cognitive system, usually speaking aloud with the response activity, with the attitude of knowing or may not know the information, and if known, it may be true or false. But the listener will have an attitude of believing that this is the case. The second is the attitude, the speaker’s assessment is the attitude affecting the GT object associated with the intention and purpose of the PN. The questioner often expressed by using NN elements indicating the desire to be provided with new information or expressing the attitude of calling for the activity to answer in order to know what is needed to know.

b. The subject-state element of the PN contains the OST

c. The receiving object element of the PN contains the cognitive system as the listener object, the object of the response to the state given by the subject of the PNH. Whether the answer is sincere or not depends on the corresponding response.

d. The state element ND proposition of the PN contains the cognitive system which is the modality (attitude and evaluation) of the GT people towards the situation mentioned in the PNH.