1.1.1.The concept of speaking action

Humans create PNs that are expressed in words, phrases, and syntax, and perform activities with those PNs themselves. That is the speaking contract (speech act), including three types: 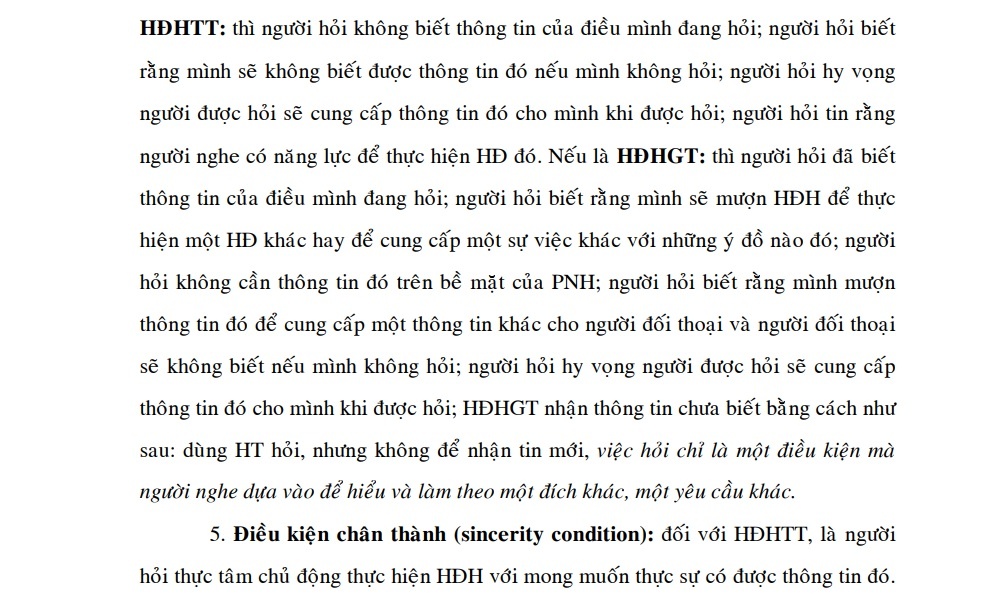 1. Locutionary acts is a selection operation so as to create a meaningful NN expression as a basis for PN or speech-making activity is an activity using NN elements at phonetic, word and word levels. vocabulary, grammar, on the basis of selecting and combining them, to create NN expressions with sufficient meaning. For example, a woman who speaks a lisp, doesn’t have enough vocabulary, or doesn’t know a foreign language, or is unable to create a language that makes other people understand… then that person has not been able to perform the language-generating contract.

3. Perlocutionary acts (borrowing words; by words; cross-linguistics) is to make speech-generating activities, middle-language activities to achieve an effect according to the intention of the speaker and create a corresponding linguistic response. in the recipient.

In GT, there are many speech purposes such as: presentation, invitation, greeting, clarification, question…. When implementing the OS, we not only try to create PNHs containing words and phrases in certain syntactic structures used to ask questions, but also at the same time implement the OS with the questions themselves. It’s OS (ask acts), there are three types

1. The locutionary acts is the choice for creating the query NN expression with enough meaning as the basis for PNH. Those are the NN elements at the phonetic, lexical, and grammatical levels that create the NN expression that asks, has enough meaning, and makes the listeners in the context understand and recognize the OS.

2. Acts of the middle language used to ask (illocutionary acts) is the purpose of asking and the function of asking in the mind of the speaker when performing the act of creating an interrogative language.

3. Verbal activity has HT questions but not to ask, Activity creates language used to ask, middle language activities must achieve an effect according to the speaker’s intention.

2.1.1.3. Conditions for the implementation of the OS

1. Context condition (felicity condition): belongs to the appropriate situation with the implementation of the OS intended by the questioner; and listener awareness.

2. General conditions: is the condition that GT participants can understand each other and are aware of their contract.

3. Condition on ND (content condition): both sides towards the ND (explicit or implicit) of PNH, must talk about a single fact of reality, with elements Homogeneous circumstances are linked together by identical relations and are placed in the same frame of reference in space and time. This is the condition for the identity of the question statement ND and the important criterion for locating and identifying the operating system in the speaking event. For information systems, with obvious meaning, the questioner when placing the PNH has determined himself and placed the respondent in a certain space and time reference system, locating the ND elements in a certain coordinate. .

4. Preparatory conditions: for an OS, there must be a clear enough difference compared to other contracts, for example, other promises warn. When promising something, there are two preparatory conditions: the thing will not happen by itself; the event is promised towards a beneficial effect for the listener. Preparatory Conditional Warning: the speaker does not know clearly whether the listener here knows that the event will happen or not; The speaker here is thinking about what will happen, so there is a warning contract for the listener.

6. Essential condition: the speaker intends to force the listener to provide information or to comply with his intention. The base condition combines with the specifics of what is required in the PNH ND, the context and the speaker’s intention to make a particular OS properly implemented on both sides. [36; 76; 194]

According to the theory of discourse analysis: a range of NNs, mainly speech NNs, larger than a sentence, usually a number of PNs. The set of women is created a social situation consisting of many participants, having a type of social relationship, in a certain GT environment, with certain specific goals, called a speech event. Each speech event is a separate case of using NN to communicate, or the activities of the participants, to influence each other through NN in some conventional way, to achieve a certain purpose. . They are governed by the norms and rules of the use of NN, which vary by NN communities. The set of PNs is created in a kind of social situation in the transactional environment, including many people in the role of buyers and sellers, and they have a type of social relationship that is the MB’s interests linked together, in an environment. The school is the place where the MB negotiation takes place (it can be a market place, a supermarket, wherever the MB event takes place…), with a specific goal called a GTMB speech event.

Depending on the topic, there are countless OSes, as they depend on the meaning of the descriptive ND the questioner wants to refer to. For example, ask for product name, price, quality, etc.

2. 1.2. 3. Based on morphological and structural criteria

Based on this criterion, OS consists of two types: OS with the purpose of asking, to know new information; The OS is not used to ask questions, but to borrow the OS to perform the operating system.

OS is aimed directly at the listener, not through an intermediary;

The OS is not intended to ask the listener directly, but to ask indirectly through an intermediary.

a. OS is contained with PNH

The OS is contained using PNH, which consists of two primary subcategories, namely:

* OS is contained with PNH, which contains PTYPE

– The OSGT contains an unofficial PNH license with two different purposes, so we continue to divide the OSGT into two sub-categories of level 3: https://tailieuthamkhao.com

+ The operating system through the intermediary (intermediate OS) is represented by the official PNH, which contains the PTH but is not the information system, but must go through an intermediary to receive unknown information (ask another person, for example, the first person asks the second person to send a message to the third person, but the first person either does not like to ask directly or does not have the conditions to meet …) to carry out traffic communication, the purpose is to know the information. unknown or known. The NTP contains an unofficial PNH, because it is an intermediary, does not ask directly – contains PTH, (the essence of the NTP is contained with a legitimate PNH through an intermediary)

– OSGT containing unofficial PNH license, without PTH with two different purposes, should be further divided into two sub-categories of level 3:

+ The World Trade Organization (OS through an indirect intermediary), no PTH, has a goal to know

+THDTHĐK (to indirectly other activities), no PTH, no destination to know.

b. OS is represented by not using PNH

In this group, since OSs are contained by not using PNH, they of course do not contain PTH and cannot be OSTs. So mainly there is only type of OSGT.

– OSDTHĐK (OS to indirectly other activities)