In terms of products and services, savings and term deposits are used the most by customers (94.9%), followed by payment deposits (63.7%), ATM cards (42). .3%), Ebanking service (40.6%), domestic money transfer service (26.9%), international money transfer service (12%), bill payment service ( 11.1%), the remaining services that customers do not use or use insignificantly. In general, customers have not used SCB’s products and services to the maximum (see Table 2.1).

Regarding the preliminary assessment of the quality of each service, savings deposit, time deposit and payment deposit are rated as good as average, domestic, international money transfer and international payment services , e-banking services Ebanking and ATM cards are rated at average as quite good, the remaining services are at normal level (see table 2.1).

Table 2.1: Information and preliminary assessment of products and services used

Component Responsive: customers rated from the DU7 to DU9 scale after the merger at a fairly good level, which is higher than that of the pre-merger. Particularly, the DU9 scale from the DU10 to DU15 scale after the consolidation all decreased slightly compared to before the consolidation but still at an average score of 4, which is a good level. In general, the Response component after the merger is still rated higher by customers than before the merger. This shows that the response of SCB has increased but not high, but still at a good level (see chart 2.16). 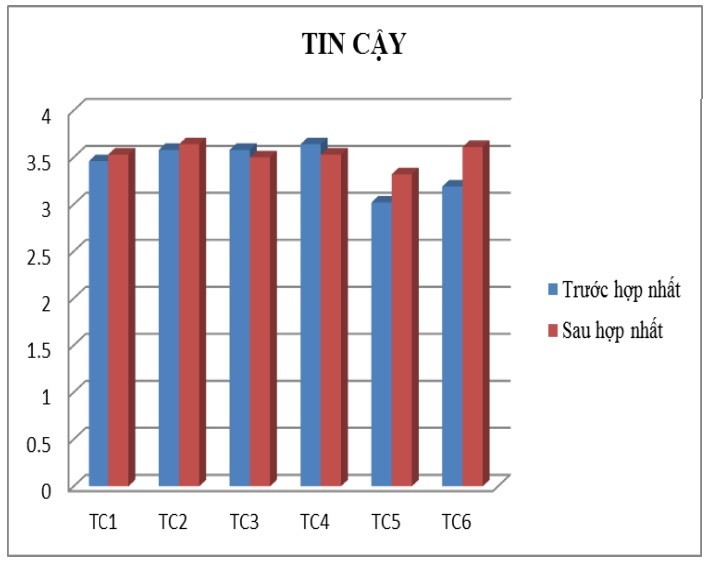 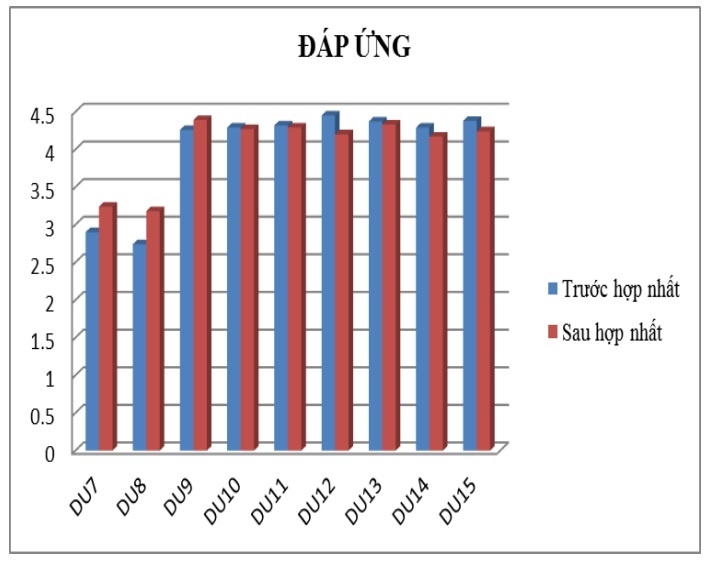 Empathy component: customers rate the 6 pre-merger and post-merger scales from pretty good to good. The post-consolidation rating is higher than the pre-merger rating minus the slightly decreasing DC24 scale (see chart 2.18). 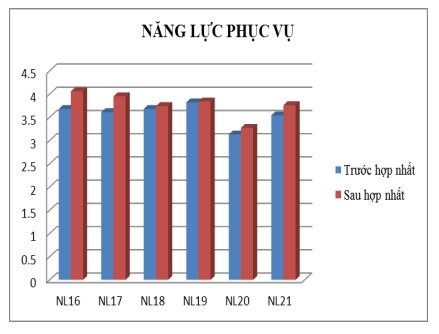 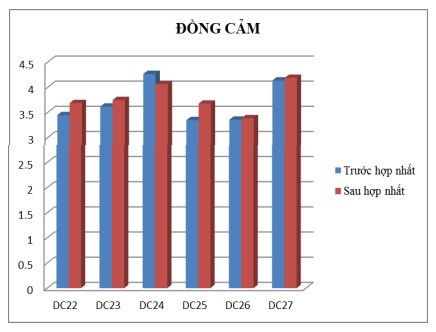 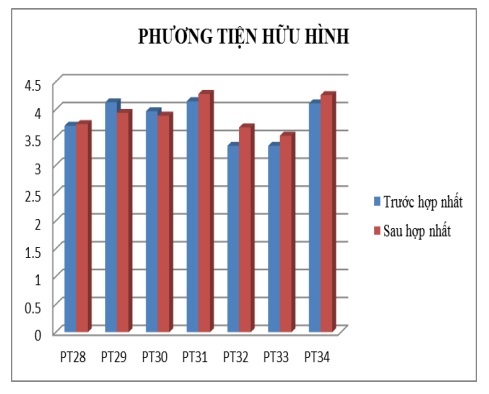 General conclusion: The results of the Cronbach Alpha reliability analysis for 6 scales (Reliability, Responsiveness, Service Competency, Empathy, Tangible Means and Customer Satisfaction) all reach the reliability of the scale. at an excellent level. This proves that the scales for measuring research concepts are reliable and that the data collected through these scales achieves internal reliability for in-depth analysis.

– First analysis: KMO coefficient = 0.894, satisfying the condition >=0.5, so the data is suitable for EFA factor analysis. Bartlett’s Test has statistical significance (Sig. < 0.05), so the observed variables are correlated with each other in the population.

After rotating the factors, out of 34 variables in the factor rotation matrix table, there are 3 variables with the largest loading coefficient <0.5 that do not meet the requirements. Six variables were removed after 7 times of EFA factor analysis as follows: PT33S, NL20S, DU15S, DU14S, DC25S and DC27S.

Variables that violate one of the following conditions:

– The 7th analysis: KMO coefficient = 0.873 meets the condition >= 0.5, so the data is suitable for EFA factor analysis. Bartlett’s Test has statistical significance (Sig. < 0.05), so the observed variables are correlated with each other in the population.

Table 2.4: Table of results after 7 times of factor analysis

The coefficient KMO=0.818 satisfies the condition >=0.5, so the data ensures enough samples for factor analysis.

Bartlett’s Test has statistical significance Sig = 0.000, satisfying the condition < 0.05, so the observed variables are correlated with each other in the population.

The results of EFA factor analysis for the dependent variable (Satisfaction) show that: the Satisfaction scale achieves convergence (validity) to measure the research concept.

2.9.5.3. Correction of research models and hypotheses

Analysis of the relationship between service quality components

The multiple regression equation showing the relationship between factors and customer satisfaction has the following form:

The analysis results show that the F-statistic is calculated from the R2 value of the model with very small statistical significance (sig. = 0.000a), showing that the multiple linear regression model is suitable for the data set. available and usable. Also, adjusted R2 = 0.711, which means that the model explains 71.1% of the variation in the data, in other words: 71.1% of the variation in satisfaction is explained by 5 independent factors.

Table 2.8: Statistical parameters of each variable in the equation

The linear regression equation extracted by Beta coefficient has the following standard form:

The results show that all 5 factors of service quality have a positive and statistically significant impact on Customer Satisfaction (all Sig.<0.05) respectively as follows: Empathy has The strongest impact level (0.348), followed by Responsiveness (0.229), followed by Tangible Means (0.210), Reliability (0.119), and finally Service Capacity (0.116).

The regression equation (*) shows the relationship between the components in the new banking service quality scale, customer satisfaction. On that basis, we have 5 tested hypotheses as follows:

Table 2.9: Hypothesis testing of the model