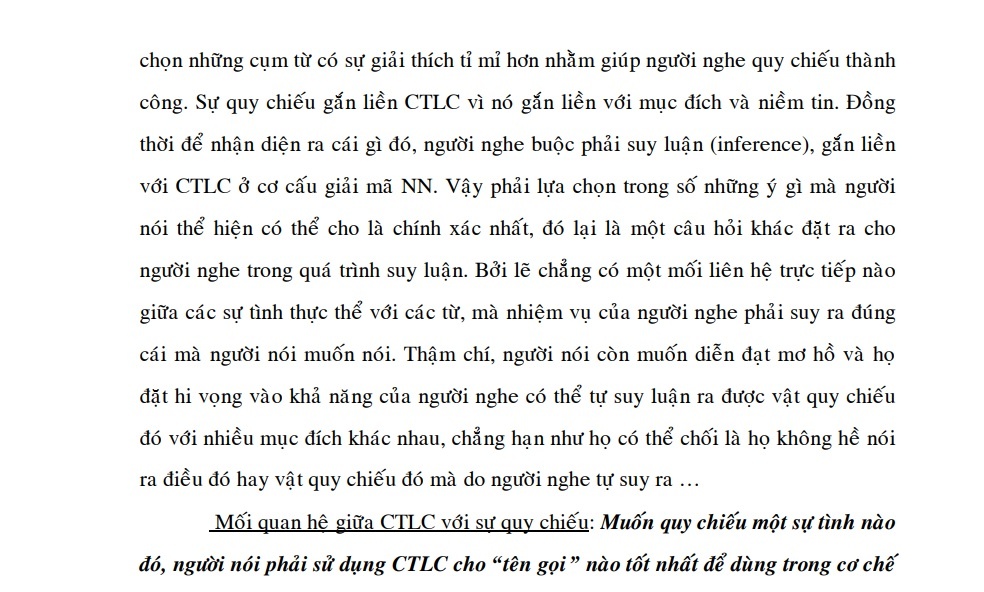 At the same time, it is the choice, combination, and rearrangement of the old systems in a reasonable way also in the above ways to contribute to the resolution of that conflict.

Context is an important factor that affects what is said, how the speaker organizes, according to a rule of language selection, how to match what is said, in accordance with context and with whom the speaker intends to speak. Those are the questions: to whom? Where? At what time? Under what circumstances? CTLC is the study of the meaning of context. This is different from the research direction of formal scientists.

Because we examine how speakers use NNs associated with context, describe what speakers and listeners are doing in context, the relationship between the speaker and the PN, the potential relationship between the PN this to another PN… To see the role of context clearly, we try to put a certain PN in a certain context to explain, then we put that PN in a completely different context and try Ask the questions: Would that PN mean differently in different contexts? Does it have any other effect? How does it affect GT people?. . . Example (5) like:

Context 1 (Buyer): How old is this bag? (Context: MB, the buyer means to criticize the goods lightly, blame the seller for being underweight…) Different from:

Scenario 2 (The Giver): How many years is this bag? (The context of being given, the person being given has the implication that the giver has given him too much, of course it has a positive connotation, compliments the heavy gift package…). So, the same PN in different situations will convey different messages.

“Situationnal context is the extra-territorial context of a PN or the extraneous information that contributes to the PN’s meaning”, including: counter-language; reality beyond discourse. The counterpart, also known as a GT participant, has two types of dominant relationships, namely interaction and interpersonal relationships.

a. In a GT meeting, there is always a GT role, also known as an interactive role, creating an interactive relationship, including the speaking role and the listening role. Because dialogue is a verbal social activity, there must be intentions, beliefs, and plans between the interlocutors to achieve the goal, that is, to make their dialogue intentions come true. The interaction relationship also manifests itself as the GT position relationship such as: initiating, maintaining, redirecting topics, distributing speeches, etc. of the interlocutors.

c. Excluding the opposites, all the things that form the environment for a GT are collectively called non-state reality, including factors such as the context of the wide world, the context of the narrow world, the reality in question, the system references and contexts. The broad GT context is the sum total of political, geographical, etc. factors for GT events. The narrow GT context is the specific space, time, and place of the GT race.

The concept of space here is associated with a specific time and place coordinate with typical conditions, objects, and characters in that space, which must have compatible and appropriate verbal behaviors. . The reality being talked about is the things, activities, etc. outside the state, or the state itself, is a segment in the objective and subjective reality that is talked about in the GT life.

The context at different times of the GT is the realization of the factors that make up the different context and the GT continuum. Therefore, the dynamic context, the dialogue must also “fluctuate” [38, p121]. Meaning is related to what one wants to say, broadly, more deeply than to what the words or phrases in PN themselves say, must be closely tied to the particular context. Context has a great influence on what is said. So how does the speaker organize what he intends to say to suit the person he or she intends to speak to, in what place, at the time, under what circumstances?

Relation of CTLC – NN – context: In CTLC, NN must have ND – HT suitable for the context. On the contrary, the context will help the speaker orient and select the appropriate NN signs to reveal all the explicit and implicit meanings in that context.

All of the above problems can answer the question: What determines the choice between what is said and what is not said? Which mechanism to choose to ensure the information to be notified? Does CTLC exist? Here, we need to answer the following questions: Does CTLC rely on close proximity, physical proximity, perception, and experience to help the speaker determine whether to speak more or less and speak? how?

Is this near-far distance related to the reference-only problem? Reference [38] is an activity in the speaker’s linguistic activity (because the words themselves do not refer to anything, but it is people who do the referencing) that uses linguistic forms to do the work. allowing listeners to identify and determine the situation in the relationship between the PN and the parts that make up the context (because thanks to the object projection, the NN is associated with the context).

The NN morphemes that help listeners determine the situation are called refering expressions, which can be proper nouns, phrases defined by export-only expressions (the output-only part is presented by us). details in the next section)…

It is the responsibility of the listener to determine the correct meaning of the referent in the speaker’s intention of projecting, to recognize what the actual referenced thing is. If the case is more difficult for the listener to identify, the speaker is forced to choose phrases with a more detailed explanation in order to help the listener refer successfully. Reference is attached to CTLC because it is associated with purpose and belief. At the same time, in order to recognize something, the listener is forced to make inferences, associated with CTLC in the NN decoding mechanism.

So having to choose among the ideas that the speaker expresses can be considered the most accurate, that is another question for the listener in the inference process. Since there is no direct connection between actual facts and words, it is the listener’s task to infer exactly what the speaker wants to say. Even speakers want to be ambiguous, and they place their hopes on the listener’s ability to deduce that reference for various purposes, such as being able to deny that they are not. never said that or that reference that the listener inferred by himself…

The reference type mentioned above has an effective combination of intent to identify; recognition of intention. The process of referencing to identify a particular thing, not only requires the activity between the speaker and the listener, but it is a process of operating according to conventions with experience and familiarity. belonging, regularity, stereotyping… among community members, having a common culture and language.