The branch’s accounting – treasury department is responsible for performing tasks such as: Managing and performing detailed accounting and general accounting; carry out post-audit work for the branch’s accounting activities; performing financial management and supervision tasks: Coordinating with departments to develop and submit financial plans; monitoring and managing assets, labor tools, stationery, printing expenses.. In addition, the department is also responsible for the correctness, accuracy, timeliness, reasonableness and truthfulness of accounting data. , financial statements, accounting reports; safe management of treasury money in accordance with regulations of the State Bank and Sacombank; make advances and collect money for transaction offices inside and outside the ATM counters as authorized in a timely, accurate and correct manner; collecting and spending cash with large transaction value, administrative organizations conduct money transfer between the branch’s professional fund and the State Bank and Sacombank’s affiliated banks in the area,…

As the administrative office and business service office at the Branch, performing security and safety work at the Branch. The administrative division has the following main tasks: To comply with regulations of the State and Sacombank related to staff policies on salary and social insurance¼; perform labor management, recruit labor, mobilize and arrange staff in accordance with the capacity, qualifications and requirements of business tasks according to the Bank’s competence; carry out training and planning for leaders of the Branch and develop plans and organize training to improve the qualifications of all staffs of the Branch; regularly check compliance with regulations and internal regulations of Sacombank. 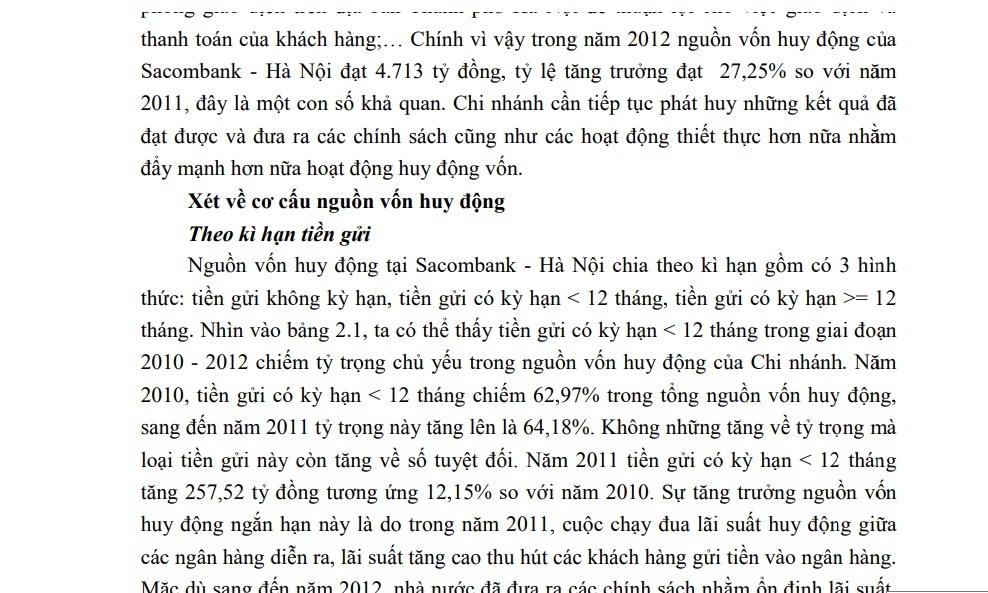 The Internal Control Department is responsible for: Inspecting the operation of the Branch and its affiliated units in accordance with the resolution and direction of Sacombank; inspect and supervise the observance of business regulations in accordance with the law and the State Bank, ensuring safety in monetary, credit and service activities of the Branch; checking the accuracy of financial statements, balance sheet reports and settling complaints and denunciations related to the branch’s operations.

With the goal of striving to become a modern, versatile retail bank and with the motto “bringing the highest value to customers”, Sacombank – Hanoi constantly adds and develops a system of products and services. of the bank richer than ever.

However, the Branch promptly issued appropriate policies, adjusted interest rates, closely followed the socio-economic development goals in the area, did a good job of serving customers as well as strengthening advertising activities. promote the brand to customers. Moreover, the Branch also tries its best, thoroughly exploiting different capital sources, from savings deposits to payment deposits of customers; from improving service quality to expanding locations and transaction offices in Hanoi city to facilitate customer transactions and payments;¼ Therefore in 2012 the capital source Sacombank – Hanoi’s deposits reached VND 4,713 billion, a growth rate of 27.25% compared to 2011, which is a positive figure. The branch needs to continue to promote the achieved results and come up with more practical policies and activities to further promote capital mobilization.

According to the deposit term https://tailieuthamkhao.com

Funds mobilized at Sacombank – Hanoi are divided by term into 3 forms: demand deposit, term deposit < 12 months, term deposit >= 12 months. Looking at Table 2.1, we can see that deposits with a term of < 12 months in the period 2010 – 2012 accounted for the main proportion of the branch’s mobilized capital. In 2010, deposits with term < 12 months accounted for 62.97% of total mobilized capital, in 2011 this proportion increased to 64.18%. Not only increased in percentage but this type of deposit also increased in absolute number. In 2011, deposits with term < 12 months increased by 257.52 billion VND, equivalent to 12.15% compared to 2010. This growth in short-term deposits was due to the race in interest rates in 2011. occurred between banks, high interest rates attracted customers to deposit money in banks. Although by 2012, the State had introduced policies to stabilize interest rates, but short-term capital still increased by VND 912.85 billion, equivalent to an increase of 38.40% compared to 2011 and accounted for the largest proportion. 69.81%. The above positive results are an effort of the Branch for constantly innovating short-term savings deposit products with more favorable interest rates and offering more attractive services. On the other hand, it is also because businesses switch from demand deposit to term with short term to enjoy higher interest rate. The increase in short-term capital helps the Branch’s short-term solvency to be more secure, and proves that its prestige is increasingly enhanced, customers know the Branch more.

Holding the second highest proportion after deposits with terms of less than 12 months are payment deposits with the proportion ranging from 20% to nearly 30%, the proportion decreasing over the years. The proportion of demand capital is too high, which may cause the Branch to fall into a passive state in business activities (this is a low stable and high-risk mobilization source) when the cash source fluctuates in the direction of the bank. negative direction. Therefore, the Branch has put in place reasonable measures to control and maintain this proportion of funds, so there has been a slight decrease in the proportion of demand deposits year by year. Although the proportion decreased, the demand capital still grew slightly in the period 2010-2012. In 2011 the demand deposit increased by 2.65% compared to 2010 and in 2012 this capital increased by 1.57% compared to 2011. The branch has been active in finding new customers. , especially businesses, organizations and individuals that have a need to deposit money into banks for the purpose of payment transactions to pay for the purchase and sale of goods and services with preferential costs and quick services. . This has helped the bank’s demand for deposits increase year by year. However, the decrease in growth rate over the years is due to low interest rates on demand deposits, businesses want to earn more, so they switch to term deposits with short durations with higher interest rates.